Home » Coronavirus » Theft In A Pandemic: Public Healthcare In Kenya Grinding Towards A Halt As New Scandal On PPE Procurement Comes To Fore

Theft In A Pandemic: Public Healthcare In Kenya Grinding Towards A Halt As New Scandal On PPE Procurement Comes To Fore 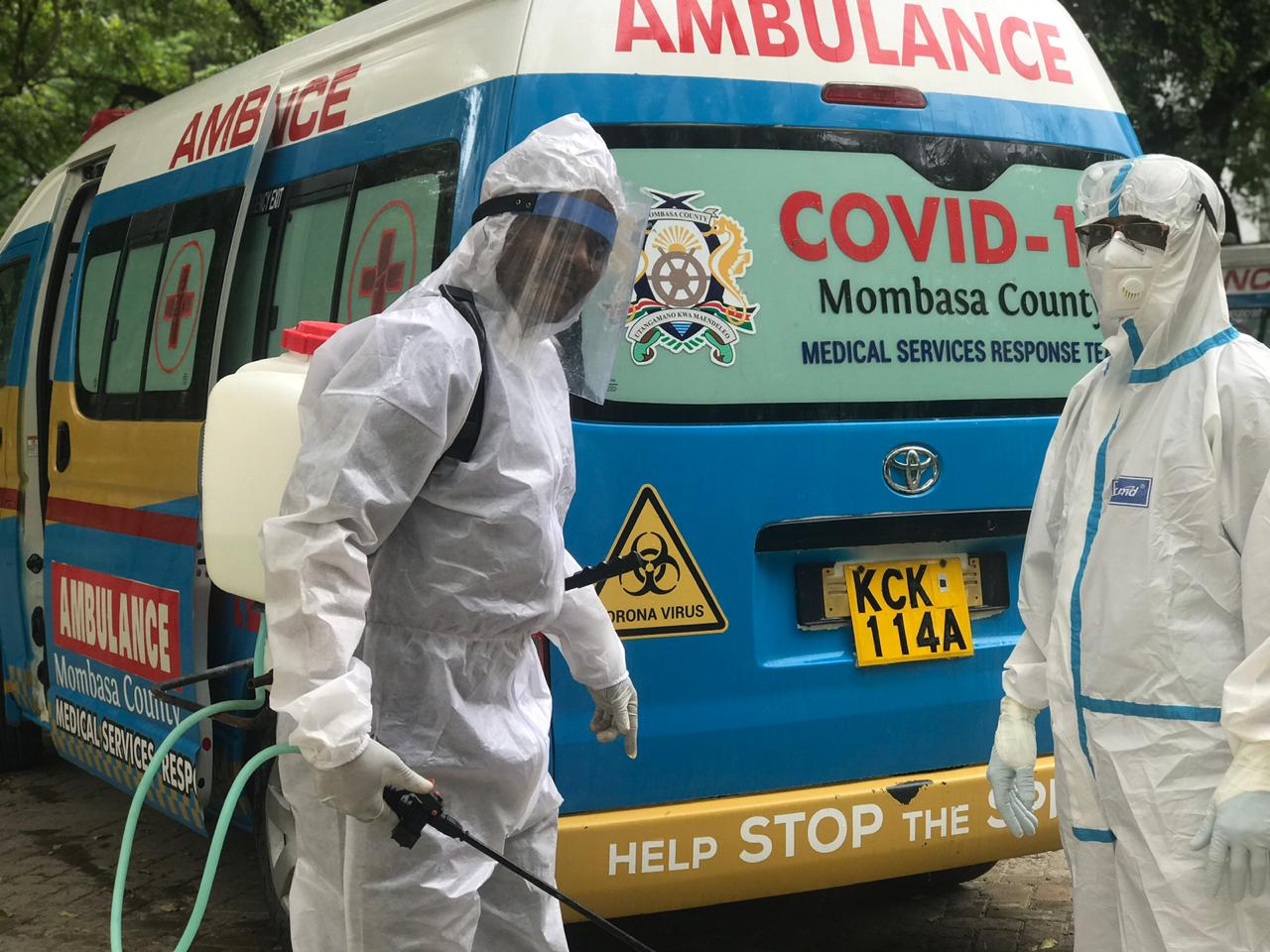 Health workers in Kenya have started industrial action in several parts of the country leaving the public vulnerable as COVID-19 which has so far caused more than 530 deaths continues to spread. Kenya is currently one of the most affected countries in the continent recording more than 30,000 cases.  Numbers that experts warn is not a true reflection of the spread of the virus due to low testing capability. This outbreak is also the subject of a new scandal in which a few companies owned by well-connected politicians or their proxies benefitted from lucrative tenders worth millions of dollars – some of them incorporated just weeks before the country recorded its first case.

A TV expose’ that aired in one of the local channels accused officials of a ministry of health agency in charge of hospital supplies of colluding with well-connected businessmen to defraud the country of over USD 400 million meant for the fight against COVID-19. Theft that did not even spare donations from Chinese philanthropist Jack Ma whose donation of PPEs is alleged to have been diverted and sold to private businesses in Kenya and Tanzania.

Kenya Medical Supplies Agency (Kemsa), an independent body within the ministry of health that solely supplies medical equipment, drugs and other utilities to public hospitals irregularly awarded supply contracts worth millions of dollars to 12 companies for personal protective equipment (PPEs). Among the companies that got these contracts is Kilig Limited which was incorporated by 30-year-old Minyow Onyango in January (just two months before Kenya’s first case was reported)  was awarded a USD 40 million contract to supply hundreds of thousands of PPEs without demonstrated capacity to fulfil the order. These kits which on average cost USD 45 were being sold to the government at an inflated price of USD 900.

While on the face Ms Onyango is the sole director of the company owning all 1,000 shares, a report by Kenya’s Daily Nation alleges that she is a proxy to a very influential politician from the ruling Jubilee Party who also enjoys a close relationship with President Uhuru Kenyatta and opposition leader Raila Odinga. The politician is known to use his connections to secure lucrative contracts which he then gives out to others at a commission.

Ziwala Limited which is co-owned by Ms Samantha Ngina Muthama, President Kenyatta’s kin also got a contract worth USD 0.8 million to supply 120,000 pieces of face masks. Interestingly, in 2015, Afya House (the Ministry of health HQ) was rocked by yet another scandal in which President Kenyatta’s sister, Nyokabi Kenyatta Muthama, and a cousin, Kathleen Kihanya, were paid USD 378,000 as part-payment for several tenders it won for supplies to the Kenya Medical Supplies Authority. At the time, the ministry is said to have lost over USD 50 million in irregular supplies tenders. A year later, it emerged that the same company was listed in the Treasury’s roll of companies that should get preferential treatment for tenders reserved for special groups which include the disabled. The company which was incorporated in 2013 – the year Kenyatta became president, has won lucrative government tenders worth millions of dollars.

The expose has caused a huge credibility dent for the government even as it attempts to firefight by questioning the authenticity of the media report. Health Minister Mutahi Kagwe while previously acknowledging that there exist corruption cartels at his ministry headquarters now christened ‘Mafia House‘, denied the allegations made in the expose’, terming them as ‘mere fiction‘ while appearing before a parliamentary committee last week.

Following the expose’, donors are now asking for records on how their financial assistance was put to use by the government. Since March 2020, the government has received donations from several aid agencies and individual philanthropists. The International Monetary Fund (IMF) gave Kenya about USD 725 million, the World Bank USD 1 billion, African Development Bank USD 208.3 million and the Europian Union USD 69.4 million.

USAID which supports programmes for HIV, tuberculosis and malaria treatment in Kenya, has already threatened to withdraw support worth USD 4 billion beginning next year if the government does not move swiftly to end corrupt at the health ministry.

In a move that shocked many, Kenya’s main opposition party the Orange Democratic Movement (ODM) on Saturday issued a statement accusing the media of being “unpatriotic” by publishing “sensational” claims that might hurt the country’s image with donors.

Suffice it to say that all Kenyans of goodwill have found these allegations disturbing and thoroughly demoralising, at a time when we are losing more lives to the virus…We gather that the DCI has been called into Kemsa to investigate these matters. We, however, wonder how this can be so before a credible audit by the Auditor-General is carried out to ascertain the veracity of these claims.

Regarding the prices of the protective gear, he said it makes sense that prices were higher at the onset of the pandemic due to increased demand.

The remarks left many questioning what had happened to ODM, a political outfit that was known for its tough stance on corruption, which was also it’s key rallying call in the 2017 presidential election when it’s party leader Mr Odinga challenged Kenyatta for the country’s presidency. The statement by ODM is by far the strongest ever remarks made by any organization on the issue.

When contextualized, the remarks are quite not uncharacteristic. Since the famous 2018 ‘handshake’ that made a truce between Mr Kenyatta and Mr Odinga, the opposition has in many occasions taken sides with the government even on issues believed to be irregular or not beneficial to the public.

The Jubilee politician alleged to have been one of the key architects of this unfolding scandal also not so many weeks ago sensationally claimed that Mr Odinga is going to be the next president of Kenya in 2022. The statement was widely interpreted as an endorsement of his bid for the presidency by the “deep state.”

ODM’s position regarding the scandal has not however gone without rebuttals from both within the party and its allies and from perennial rivals.

Mr Odinga’s running mate in the 2017 polls Musalia Mudavadi who is not part of the deal ODM entered with Jubilee asked President Kenyatta to move swiftly to institute a commission of inquiry to probe the matter.

The situation, Mr. President is dire. In the midst of this terror some have found in our tribulations a source of profiteering through theft, fraudulent procurement schemes and grossly inflated prices. They need to be stopped…. The public is restless and now requires answers. Mr President a judicial commission of inquiry will unearth the real underlying problems of this malaise.

Deputy President William Ruto who is increasingly becoming edged out of the ruling Jubilee Party following the truce between Mr Odinga and President Kenyatta also weighed in accusing ODM of defending graft, calling them “lords of corruption” in a tweet sent out on Sunday afternoon.

The pretentious (former)Opposition,now turned Lords of corruption, attempted defence of the Covid19 grand larceny is NOT shocking. It confirms the worst of Kenyan’s fears that their side of handshake was never interested in the people’s good but opportunity to loot.What a shame.

While not making direct reference to his party’s statement, James Orengo, the Senate Minority Leader, and a confidant of Mr Odinga compared the “crimes” to “genocide.”

I admire Ramaphosa’s understanding of the anger outrage & disillusionment in SA regarding govt. response to corruption about COVID19 pandemic. Kenyans are justified to express fury and rage as COVID19 crimes border on genocide. NYS MES Dams & COVID19 cannot be our DNA as a people

Speaking in Geneva, Switzerland on Friday, WHO Director-General Tedros Adhanom Ghebreyesus termed corruption in the purchase of PPEs that’s now affecting a number of countries as unacceptable and liked it to murder. “murder.”

If health workers work without PPEs, we are risking their lives, and that also risks the lives of the people they serve. It is criminal, and it is murder, and it has to stop.

The revelations about the rot at the ministry of health come as doctors and other health workers began industrial action in at least three counties. On Friday, they were joined by more than 300 doctors working in 20 public facilities in Nairobi, and thousands more across the country are threatening to strike in September if their demands are not met.

The health workers are complaining of defective PPEs procured through such irregular tenders that have left several of their colleagues infected with the deadly virus. COVID-19 has so far infected 700 health workers and killed more than 10, according to the doctors’ union. These include at least 41 positive cases at Nairobi’s  Pumwani Maternity Hospital.

We have more than 15 doctors who have contracted COVID-19 in Nairobi county and more than 80 nurses who have contracted the disease, even clinical officers we have them. The saddest thing about having poor quality PPEs is like giving a soldier a toy gun and assuring him that he can go to the frontline, only for the gun to fail to fire, our brothers are wearing PPEs knowing they are protected only for them to get infected, we are not going to die anymore. Doctors are not martyrs, doctors are not children of a lesser god.

– Dr. Thuranira Kaugiria, Secretary-General of the Nairobi branch of the Kenya Medical Practitioners, Pharmacists and Dentists Union during a media briefing last week.

The health workers are also demanding for comprehensive medical insurance, salaries paid on time, promotions and compensation packages and exemptions from duty for doctors who are pregnant or who have pre-existing conditions. Union officials have also urged the government to hire 1,000 unemployed doctors to bridge shortages.

With threats of more workers downing their tools in the coming weeks and a surging pandemic, Kenyans might come face to face with the fruits of corruption sooner than they think.