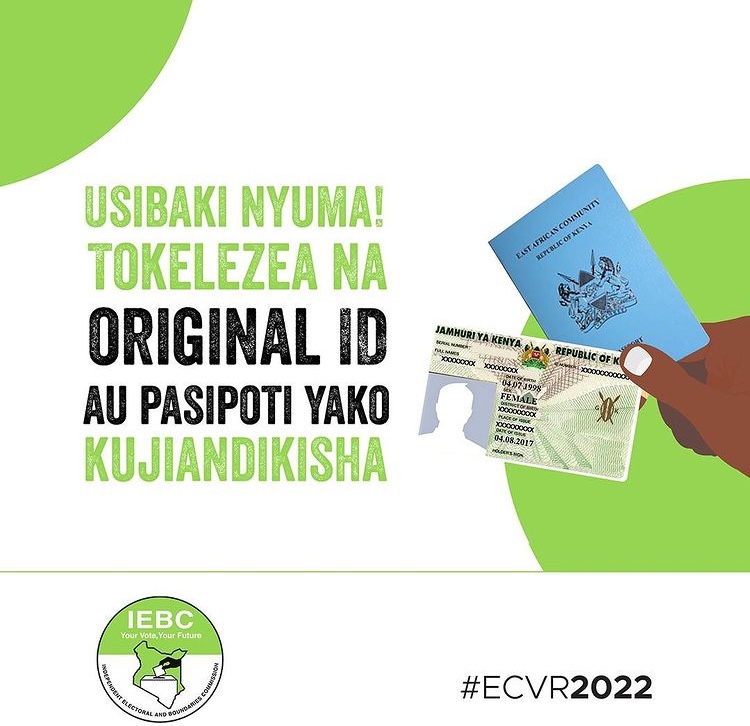 According to the IEBC boss, Kenyans living in the United Kingdom, Canada, the United States of America, South Sudan, Qatar, United Arab Emirates and Germany would have an opportunity to participate in the 9 August 2022 polls. The new centres were in addition to East African Community countries (Tanzania, Uganda, Burundi, and Rwanda) and South Africa, where Kenyans were able to cast their votes in the 2017 general election.

The IEBC was to undertake a 15-day voter registration exercise for the diaspora from 21st January to 6th February 2022. Chebukati said that additional Biometric Voter Registration (BVR) kits would be made available in countries with multiple registration centres (US, Canada, UAE, and Tanzania). A BVR kit was also to be installed in the Huduma Centre at the General Post Office in downtown Nairobi for the registration of Kenyans who would have travelled to Kenya during the registration period.

Voter registration did not kick off on schedule. In a statement dated 21st January, the Commission gave COVID-19 travel restrictions and logistical challenges as the reasons behind the failure to begin the registration. “The commission regrets the delay in rolling out the voter registration exercise in the affected countries and is closely working with the relevant authorities to ensure it kicks off,” the statement said. The Commission said that the period of registration would be prolonged to compensate for the time lost.

Registration in Vancouver and Toronto began on 1 February, on 24th January in London and 1st January in the UAE. By February 6th, the IEBC had enrolled only 2,959 new voters in 12 countries: Uganda, Tanzania, Rwanda, Burundi, South Africa, South Sudan, the US, the UK, UAE, Qatar, Germany, and Canada. The failure to start registering Kenyans in the diaspora on time, and the low numbers registered, is an indicator of the mess that has been the bid to disenfranchise Kenyans in the diaspora.

After years of lobbying for their right to dual citizenship and the right to participate in Kenyan elections in their countries of residence, the Constitution of Kenya 2010 extended voting rights to at least three million Kenyans living abroad. However, only about 4,000 Kenyans in the diaspora were able to vote in the 2013 and 2017 presidential elections.

The Kenyan diaspora does not think the IEBC has complied with the constitution. With their billions of shillings in remittances, Kenyans living abroad rightfully argue they should participate in the national elections and have felt cheated ever since only a very small minority were allowed to participate in the 2013 and 2017 elections.

In November 2012, the government of Kenya had announced that the diaspora would not be able to vote because of “logistical and financial constraints”. The then Justice and Constitutional Affairs Minister Eugene Wamalwa told Parliaments that voting outside of Kenya was “not practical” as the electoral commission was already facing challenges in enrolling voters at home.

Angered by the decision, Kenyans living abroad moved to court, calling Wamalwa’s pronouncement illegal, ill-conceived, and ill-timed. However, High Court Judge David Majanja ruled that although the right to vote is guaranteed constitutionally, it is not absolute and cannot be realized instantaneously but only progressively.

At the centre of the issue is also the actual number of Kenyans living abroad. The IEBC chairman had said Kenyans abroad must “produce evidence of citizenship which is a valid Kenyan passport”, yet Kenyans residing in other countries of the East African Community could use their identity card as proof of citizenship. However, following a High Court decision, in a memo to registering missions, the Commission announced that Kenyans in the diaspora could register as voters using either an Identity card or a valid passport.

On 20 January 2022, the Kenya Diaspora Alliance (KDA) released a statement in which it welcomed the IEBC’s decision to add eight more countries to the list of countries where the Kenyan diaspora could vote but also raised various concerns about the registration process. The lobby group, which claims it represents 46 Kenya diaspora organizations, took issue with the 15 days allocated to the voter registration exercise. Kenyans within the country were given three weeks to register but, beyond that deadline, IEBC offices were to remain open for continuous registration until the 28th of February 2022. This option was not available to Kenyans in the diaspora. “This discrepancy in the time limits seems to deny the Kenyans in the diaspora a fair opportunity to register in their numbers by having less time to register,” KDA said in the statement then.

African countries whose constitutions provide for diaspora voting include Algeria, Angola, Benin, Botswana, Cape Verde, Central African Republic, Chad, Côte d’Ivoire, Djibouti, Equatorial Guinea, Gabon, Ghana, Guinea, Guinea-Bissau, Lesotho, Mali, Mauritius, Mozambique, Namibia, Niger, Rwanda, São Tomé and Principe, Senegal, South Africa, Sudan, Togo, and Tunisia. Despite this provision, however, many of these countries have yet to make the diaspora vote a reality. This is due to a lack of the political, legislative, financial, or administrative agreements necessary for the regulation and organization of the diaspora vote.

When South Africa became a democracy following the end of apartheid, citizens in the diaspora were able to participate in the 1994 election. However, diaspora voting was abolished soon thereafter until its reinstatement following a 2009 ruling of the Constitutional Court. The ban was triggered by a dispute over the registration of voters for the 1999 elections. Moreover, voter turnout in the 1994 elections was also much lower than anticipated and the electoral commission said it did not make a lot of logistical sense to send teams to register South Africans in the diaspora.

The registration of Kenyans in the diaspora requires a strategic and organized approach, with the IEBC, the embassy and the local diaspora organizations working together. The Electoral Commission of South Africa had argued that the 1994 decision was to give those who had left the country temporarily the opportunity to vote, questioning why those who had left the country permanently would still want to vote. In 2009, however, the Constitutional Court forced the government to reinstate the diaspora vote, all South Africans living abroad could once again participate in national elections.

For its part, the IEBC has cited logistical and financial challenges in rolling out the diaspora registration. To be sure, diaspora voting is disproportionately expensive while political parties have limited resources; mobilizing potential supporters around the world is far more costly than campaigning back at home. There is therefore no incentive to push for the diaspora vote.

Angolans living abroad are likely to vote for the first time this year. In September last year, Marcy Lopes, the Minister of Territory Administration, said registration of diaspora voters would start in January 2022. The exercise will last three months. The Institute of Angolan Communities Abroad estimates that at least 400,000 Angolans live abroad, 47 per cent in Africa, 24 per cent in Portugal and a substantial number in France. The move to have Angolans abroad vote is part of the constitutional changes proposed by President João Lourenco to the National Assembly.

The Angolan Constitutional Law of 1992 provided for the diaspora vote but lack of logistical capacity to undertake voter registration abroad has meant that Angolans living abroad have not enjoyed the right. Angola’s missions abroad started registering citizens on January 17. Angola’s Ambassador to Portugal, Carlos Alberto Paz Fonseca, estimates that about 30,000 nationals who have attained the voting age will register. The IEBC should make adequate preparations to allow Kenyans living in the diaspora to register to vote as it is a right provided for in the country’s constitution.  The Commission, for instance, should have its personnel stationed in embassies abroad to facilitate the continuous registration of Kenyans as voters.

As the Kenya Diaspora Alliance has recommended, the IEBC needs to explore registration through e-Citizen and other acceptable online registration platforms as this option would address the IEBC’s logistical challenges and be convenient for Kenyan voters wherever in the world they may be. It would offer an opportunity to test e-voting for future use domestically.