Home » Democracy » Kenya’s proposed constitutional changes: For the people or for politicians?

Kenya’s proposed constitutional changes: For the people or for politicians? 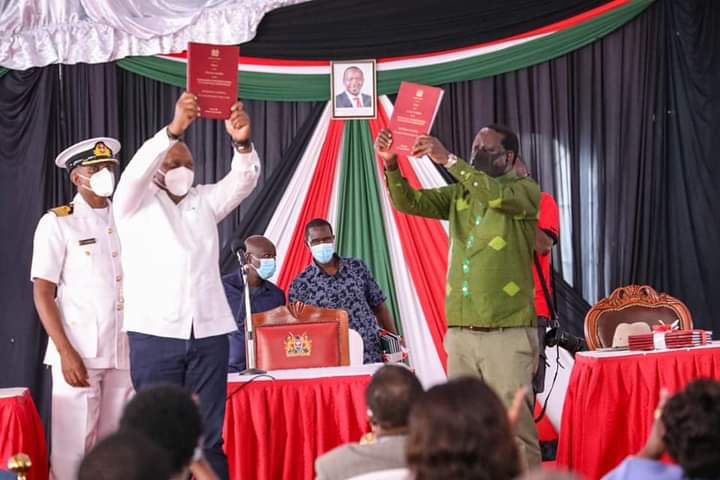 Kenya is attempting to amend its 2010 constitution through a process that has been dubbed ‘the Building Bridges Initiative (BBI).’ The idea was birthed on 9th March 2018. This was after the president of the Republic of Kenya, Uhuru Kenyatta and his closest adversary in the 2017 presidential elections and former Prime minister, Raila Odinga decided to put their differences aside and work together to unite the country that was on a verge of another post-election conflict. This is what is now commonly referred to as the “handshake” in Kenya. It came in the heat of the disputed 2017 election that was already escalating into violence.

The handshake between the two restored calm in a country that was politically charged following the hotly contested 2017 presidential election. Earlier on, the Supreme Court in an unprecedented move had nullified the results of the first elections held in August and ordered for a fresh vote.
Mr Odinga’s opposition coalition boycotted the re-run claiming an unleveled playing field. They claimed that their demands had not been met by the electoral body. This was then followed by a series of mass protests from the opposition and counter-protests by the president’s supporters that threatened to degenerate the country into chaos similar to those witnesses in 2007/2008. At one point, Mr Odinga was even publicly sworn in as ‘the people’s president.’

The two leaders of Kenya’s biggest political formations at the time decided to put their differences aside and work together in uniting the country. Thereafter, they jointly formed a task force that visited all parts of the country and had conversations with inclusive groups of citizens paying attention to gender, ethnic and religious diversity. The youth, the elderly, people living with disabilities, the civil society and the public and private sectors were also included in the discussions.

The conversations revolved around key nine points that had been identified by a secretariat made up of representatives from the two parties. These were:

At the end of their public engagements, this task force came up with recommendations aimed at solving the nine issues. Key among them was reorganizing the structure of government. They recommended a return of the position of Prime Minister with two deputies which had been abolished by the 2010 constitution. They also proposed the return of the office of the official leader of the opposition, complete with a shadow cabinet. Concerning government ministers, they proposed a departure from the current trend where appointments to the cabinet are exclusively made from outside parliament to a hybrid that would make half the cabinet consist of members of parliament.

The recommendations which now form part of the draft constitutional amendment bill also propose an increment in the money disbursed from the national government to government to the county governments from 15 percent of the budget to 35 percent. To promote the growth of business in the country, they proposed a seven-year tax holiday for new businesses owned by young people.

However, not everyone sees the ‘handshake’ or its child – the BBI as noble ideas. They argue that while the development has calmed opposition supporters, it has caused division in other quarters. Kenya’s Deputy President William Ruto is one of those who have been openly opposed to both the ‘handshake’ and the BBI process.

Mr Ruto enjoyed a very cordial relationship with President Kenyatta during the first term of their administration. Their relationship was envied by many – on several occasions they showed up in public wearing matching outfits, at times even walking holding hands like lovebirds. In their speeches, they always referred to each other as “my friend.” This bromance was however thrown out the window in their second term in office – the Deputy President was seemingly not amused by the entry of Mr Odinga into this relationship.

While it is not clear to the public the contents of the deal between Mr Odinga and President Kenyatta that led to the famous handshake, those in Mr Ruto’s camp have alleged that Odinga had asked the President to support him as is heir to the presidency. President Kenyatta had an earlier pact with his Deputy of supporting him for the country’s top job when he retires from office after his second term.

These developments have split the ruling Jubilee Party creating two factions – one supporting the president and his new ally Mr Odinga and the BBI. The other coalescing around the Deputy President and mostly opposed to the proposed constitutional reforms. Interestingly, Mr Odinga and President Kenyatta have also developed a bromance of their own. While the two do not always wear matching shirts and ties, they often refer to each other as “my brother.” You would hear President Kenyatta say “my elder brother Raila…” while referring to Odinga quite often.

That however is not the only reason there is opposition to BBI. Others have seen it as an attempt to create political positions for individuals using a constitutional process. The new offices proposed in the document will expand the size of the government, putting more burden on an already over-stretched taxpayer.

Those who hold these opinion also argue that the positive recommendations that have been lumped into this bill do not require a constitutional amendment and have only been lumped together with the proposal to reorganize government structure as bait for the voters.

Those who support the process however insist that it is exactly what the country needs at this point. They argue that the expanded government will increase representation and promote inclusivity. This they say will reduce the intensity of political competition resulting in a more united country. They also cite things like increased disbursements to devolved units and other incentives to businesses and youths as reasons why the public should support the initiative.

The question of how an expanded government fixes the problems of an ethnically divided country like ours is still one that’s difficult to answer. The people who drafted the report fail to recognize that placing a tribal representative at a high table will not fix our ethnic differences. This is because our perception of ethnicity is the result of bad politics and poor leadership.

Where we stand now

The constitutional amendment bill has already been passed by more than 40 local assemblies and now awaits parliamentary processes. The law only set the threshold at 24 assemblies adopting it. While this to the outside eye might portray the bill as popular, the reality is far from it. The members of the local assemblies were among other things bribed to adopt the document. The government promised them a USD 20,000 car grant for supporting the bill. In other instances, state institutions were used to threaten members of the assemblies. In one assembly where the bill was rejected, several members were summoned by the Ethics and Anti-Corruption Commission. Already we are hearing about area chiefs being ordered to collect signatures for the BBI referendum.

The government is seemingly having its way. The Deputy President has also withdrawn from directly campaigning against the proposed amendment, meaning that should parliament ratify the proposals – we will be heading to a referendum, but without strong voices educating citizens on the dangers of accepting these changes to our supreme law.

Whatever happens next, only time will tell. But it would be rather foolhardy to expect these changes to fix our future as a nation. Our constitution indeed will need future reviews, but even where we stand currently, we yet to fully operationalize it to deliver on the dreams of its drafters. This attempt that we have now is nothing but another unfortunate greedy attempt by power-hungry individuals to derail this country’s journey.

The author is a freelance journalist based in Nairobi Kenya.