Home » Diplomacy »  Will the October elections in Somalia birth a new beginning for Kenya-Somalia Relations?

Will the October elections in Somalia birth a new beginning for Kenya-Somalia Relations? 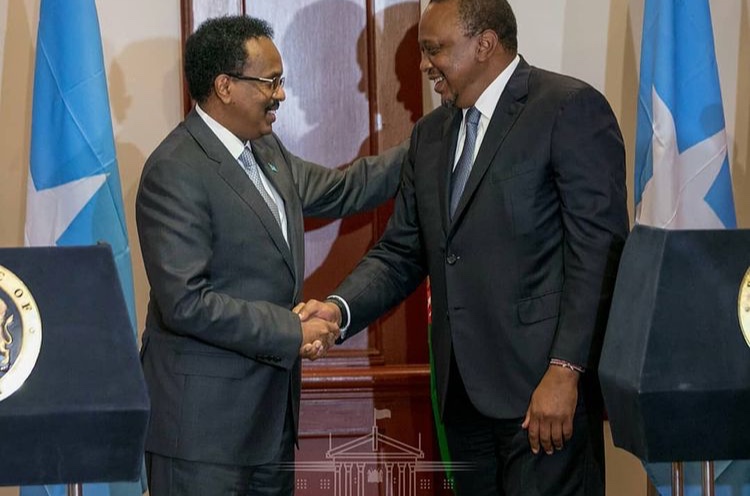 Somalia’s leaders have agreed to hold delayed parliamentary and presidential elections by October 10 this year. The outcome will have significant ramifications for the country’s relationship with Kenya. For decades, Kenya and the Federal Government of Somalia (FGS) have operated as reluctant allies drawn together by the realities of regional humanitarian and security challenges. For example, Kenya hosts over 200,000 Somali refugees in Dadaab that have fled decades of drought, conflict, and terrorism.

The government has sought to close the camps many times due to alleged security concerns. But Somali leaders – including Kenya’s allies in Juba land have rebuffed efforts to expedite the refugees’ return due to insecurity and lack of resources, which is largely why Kenya has maintained its deployment of approximately 3,500 troops as part of the African Union Mission in Somalia (AMISOM).

The two countries have regularly taken retaliatory measures against each other in response to bilateral disputes. Somalia has banned the importation of the narcotic plant miraa from Kenya, which has cost its farmers millions of dollars. On its part, Kenya has at times stopped or hampered travel between the two countries. Most recently, in December 2020, Somalia severed diplomatic relations with Kenya, alleging that Kenya’s growing relationship with Somaliland and interference in Jubaland’s political process amounted to undue intervention in Somalia’s domestic affairs. Qatar later mediated a resolution to the dispute, and both countries are implementing the agreement.

The election of new national leadership in Somalia will offer an opportunity to develop a new common framework for cooperation to address areas of disagreement, including the fight against al-Shabaab, recognition of Somaliland, and delimitation of the maritime border. Security cooperation Kenya and Somalia’s disagreement over a joint border security strategy has harmed the security of both nations.

Kenya has long sought for the bordering Jubaland region in Somalia to serve as a “buffer zone” of security led by a local ally. But it has used controversial means to achieve this end, including military support to FGS rivals like Jubaland president Ahmed Madobe. On the other hand, the FGS has wanted to maximize political and territorial control of Jubaland, particularly in Gedo where Madobe has less support. Constant infighting among local and national militias has hampered its stability.

The next Somali administration must address the sources of tension and agree on a security architecture that is acceptable to Jubaland, FGS, and the local communities. Although Kenya invaded Somalia in 2011 without FGS consent and against the advice of key foreign partners, ultimately its forces have played a critical role, together with Ethiopian and Somali troops, to retake critical urban areas from al-Shabaab in the Jubaland region. However, the prolonged nature of AMISOM’s mission, now 14 years has created fatigue to conduct offensive operations.

As matters stand, al-Shabaab still controls the entirety of the Middle Juba region and most rural areas, and it is still able to tax businesses in government-controlled areas. Attacks by al-Shabaab on Kenyan Defense Forces (KDF) in vulnerable remote areas have killed hundreds and forced most troops to redeploy near the border, turning Kenya’s AMISOM contingent into a subsidized border force.

The KDF’s withdrawal of troops from conflict areas has made it more reliant on airstrikes that Somalis say indiscriminately harm or kill innocent civilians. These incidents undoubtedly diminish support for the KDF’s presence in Somalia and help al-Shabaab justify their existence to the local communities. It is for this reason that the FGS filed a formal complaint with the AU requesting that Kenya be held accountable for these actions. The KDF’s increased border presence has also not stopped internecine fighting between Jubaland and FGS troops, which have continued to fight for control of the Gedo region. Local officials in Kenya’s Mandera County have complained that pro-Jubaland militias roam with impunity inside Kenyan territory, gathering resources to fight FGS forces on the Somali side of the border.

The sporadic conflict has displaced tens of thousands of people, and the conflict has exacerbated the challenge of creating a sustainable security solution for the region. Kenya, Somalia, and Jubaland need to reach a common agreement on security architecture for the region that better defines a timeline for the withdrawal of Kenyan troops and identifies which Somali forces will take over responsibility for security in each part of the region.

The next Somali administration will have an opportunity to reset relations with Somaliland and revamp a process that has been dormant since 2015 on an agreement that formalizes how the two sides will govern themselves in the future – either separately or through some form of autonomy within a federal system. While Kenya has not officially recognized the breakaway region of Somaliland as an independent country, it has leveraged outreach to Hargeisa to pressure the FGS to compromise on critical issues.

Kenya will likely continue to take advantage of Somaliland’s dissatisfaction with the failure of the FGS to uphold aspects of previous agreements. Kenya and Somaliland have held sporadic talks between envoys, and Kenya is considering establishing a consulate in Hargeisa. The KDF’s withdrawal of troops from conflict areas has made it more reliant on airstrikes that Somalis say indiscriminately harm or kill innocent civilians. But economic matters might be the most robust incentives for Kenya to expand its relationship with Somaliland.

Since Somalia’s blockade of miraa imports has hurt Kenyan farmers, Kenya could leverage improving relations with Somaliland to get an export deal in a region where Ethiopia currently dominates the miraa market. In addition, Somaliland’s new Emirati-financed port at Berbera will compete with Mombasa and Lamu to move cargo through Ethiopia and onto other destinations in East Africa.  While Mombasa has established traffic at its facility at Kilindini, Lamu may struggle to attract new customers due to the depressed economic demand in South Sudan, Ethiopia’s reliance on ports in Djibouti and Somaliland, and ongoing security concerns in Lamu.

In this context, Kenya may need to reach trade deals with Somalia and Somaliland to maximize the amount of investment and returns tied to its domestic ports. Otherwise, there is a significant risk that China could seize control of the Kenyan ports where it has financed upgrades, as the government may not be able to pay back the high-interest commercial loans that were used to finance them. The fight over the demarcation of the maritime border between Kenya and Somalia has hobbled the bilateral relationship for over a decade. Both nations are fighting for a right to exploit rich offshore oil and gas resources. Somalia has insisted that the border should be drawn as a diagonal continuation of the southeastern border while Kenya seeks a horizontal frame that would greatly expand the country’s maritime territory.

Somalia filed a case with the International Court of Justice (ICJ) in 2014. Just days before the last round of arguments this March, Kenya withdrew from further participation in the case after the court rejected appeals to delay the proceedings to bring in a new legal team. Kenya also had sought a Somali judge on the panel to recuse himself to reduce the risk of a biased decision in favour of Somalia. Somalia’s legal team ultimately made its closing argument in the absence of its Kenyan counterpart. It may be years before a decision is reached due to the number of appeals filed. In the interim, Kenya will almost certainly push for the next Somali administration to settle the matter out of court – an idea backed by the US and the African Union.

However, the FGS will have very little room politically to negotiate a deal out of court. Many Somalis already believe the ICJ will rule in their favour. Even rumours in said that President Mohamed Abdullahi Mohamed Farmaajo’s administration was considering an out of court settlement prompted a quick and forceful denial from his office. Somaliland’s new Emirati-financed port at Berbera will compete with Mombasa and Lamu to move cargo through Ethiopia and onto other destinations in East Africa. Even if Kenya loses the case, Somalia has few possibilities of enforcing the decision.

The ICJ has no means to do so. Kenya has sufficient allies within the five permanent members of the United Nations Security Council that would object to any punitive action that would force Kenya to abide by a final decision. As a result, there is no likely scenario in which a mutually agreed solution can be reached in the near term, and any attempt to do so could provoke a political controversy in either country. Security cooperation Kenya and Somalia must prioritize security cooperation over other bilateral matters because it has the most significant implications for both nations’ peace and economic progress.

In particular, the two governments need to convene a unique forum that includes elites from the Jubaland region, to regularly discuss the transfer of security from Kenyan forces to Somali troops and other border-related security issues. To reach an agreement, both sides will have to compromise on key demands. The next Somali government may request that Kenya refrain from leveraging its relationship with Jubaland to interfere with its management of affairs in Somalia. And the FGS will almost certainly want Kenya to be more accountable for any civilian casualties incurred in security operations in the country.

On its part, Kenya will push the next government to open up miraa markets to Kenyan farmers and pressure new leaders to form a better working relationship with Jubaland so that they can use their collective resources to create a more effective buffer zone for Kenya on the border. The urgency to resolve these issues should be high since there will be a short honeymoon period for the next Somali government that will be inaugurated in October. What can be accomplished in the first year will have significant implications for how the leader of Kenya’s next government approaches the relationship following the country’s own general election in August 2022

By Margaret Chinowaita Since the first national lockdown in April 2020, Zimbabwean commuters in urban areas have faced teething...

Pandora Papers and the Kenyan Media

By Linda Apollo Reporting on the Pandora Papers leak has robbed the country of the opportunity to use the...

Since Zambians voted out the Patriotic Front on the 12th of August 2021, the country has remained divided into...