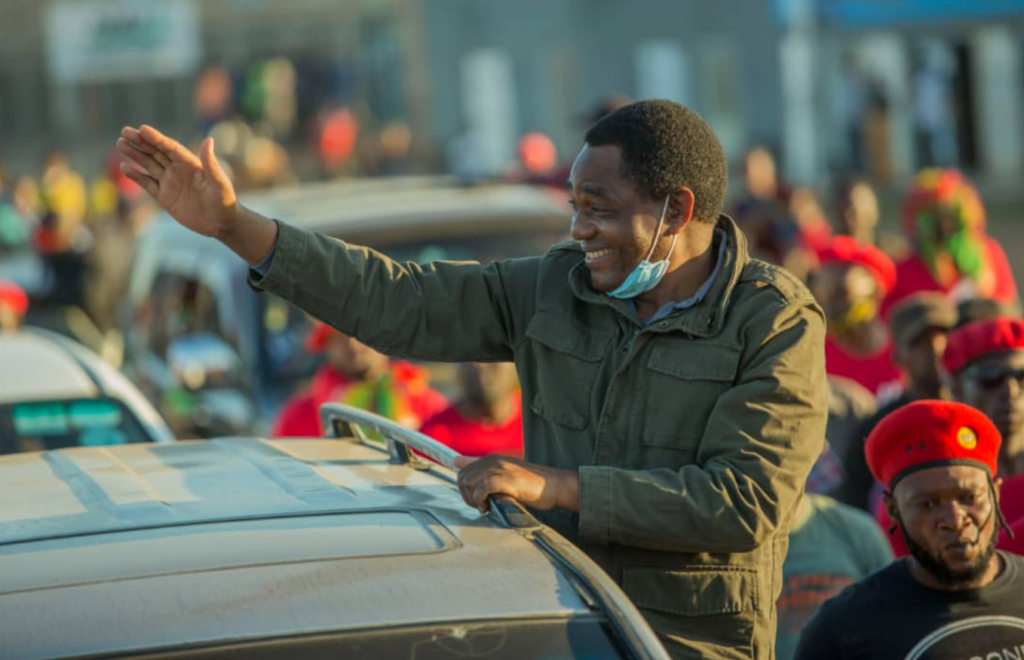 STARTING off with an emphatic win over incumbent Edgar Lungu, Zambia’s seventh President Hakainde Hichilema has had no honeymoon. Inheriting a country whose economy was poised for negative growth, crippling debt, political intolerance and breakdown in the rule of law, he knew from the onset that he had a daunting task ahead.

Half a year into his presidency Hichilema is still grappling to overhaul the state apparatus and point the country in the right direction. His critics say he is backtracking on a number of key campaign promises and seems unsure of how he will turn the country’s economy around even after securing an IMF bailout package.

On the 3rd of December, 2021 his Minister of Finance Situmbeko Musokwatane announced a breakthrough with the International Monetary Fund for a 1.4 billion dollars deal to aid economic recovery. An IMF deal had eluded the previous regime owing to poor credibility in the management of the country’s economy. The choice of Situmbeko Musokotwane who is in good books with the IMF and World Bank and Denny Kalyalya as Governor of the Bank of Zambia himself a well-regarded man on the international scene has helped.

Economist Grieve Chelwa is among leading experts who have condemned Zambia’s reliance on an IMF bailout. Reacting to another vocal supporter of Hichilema Catholic Bishop Telesphore Mpundu who is displeased with the poor performance of the Hichilema presidency Grieve described it as an indictment.

“If one has been closely and objectively following the evolution of events over the last 6 months, for example, on the economy front, which is an area of interest of mine, there’s hasn’t been much to write home about. We’ve bet our country’s future on an IMF bailout plan likely to be approved this June, a full ten months from the August 2021 elections.

However, events across the globe have moved quite dramatically in such a way that by the time June comes around, the entire IMF-dependent plan may wholly be inadequate or even irrelevant for our purposes. This again is illustrative of the point that many of us have made that policies need to be homegrown with 100% local agency such that we, on our own, can change course whenever domestic and international events change in a dramatic way.

Right now, there’s little we can do without the approval of our masters in Washington even though common sense says we re-evaluate whatever plans we might have had given the war raging in Europe which is going to have grave consequences for the future course of energy and food prices both here and abroad. It’s sad how we’ve chosen to needlessly hamstring ourselves in this way.”

The government’s 2022 budget is also positive and bold. It promises to recruit 30,000 new teachers and 11,200 healthcare staff, increase social expenditure, support small businesses, and invest more attention in agriculture. It also vows to decentralise resources, including by increasing the Constituency Development Fund from K1.6 million ($90,000) to K25.7 million ($1.4 million). And it abolishes school fees for state schools, making good on the UPND’s promise of free education.

There is a growing divide between those who are dissatisfied and those who feel satisfied and optimistic with the performance of Hakainde Hichilema and his team at the helm of the country’s affairs.  It is a painstaking ordeal to have to balance the social expectations of the public against the painstaking process of rebuilding an economy.

Hichilema has taken a stance of pardoning corrupt former officials as opposed to prosecuting them which is a direct contradiction of his campaign promises.

On the one hand, he has said that it is up to agencies such as the Anti-Corruption Commission (ACC) to investigate suspects and potentially prosecute them. This is well and good; the judiciary and executive are separate arms of government.

On the other hand, however, Hichilema has said several times that if former officials return stolen money to the government, they should be given amnesty. One legal expert said it is not clear if this is instruction or merely advice, but since the president appoints ACC officers – and his predecessor held great sway over the agency – we can assume it will be treated as a directive.

This is unconstitutional in a variety of ways. As Hichilema pointed out, he has no legal power to instruct the ACC. The pardoning of officials who may have engaged in millions of dollars worth of grand corruption would be a betrayal of justice. And it would also violate the principle that all people are equal before the law.

A young lady who was found with properties and cash in millions of dollars believed to be have been hidden with her by some leaders from the previous regime has never set foot in court or any police holding cell as the state entered a deal with her resulting in the forfeiture of the loot to the state.

Under Lungu, the government targeted its opponents with trumped-up charges and tried to prosecute them without evidence. Hichilema appears ready to violate the same principle, albeit in the opposite direction; by saving people from prosecution despite clear evidence of wrongdoing.

It is additionally worrying that the new administration has not replaced officials in anti-corruption bodies. Under Lungu, these agencies were spineless and followed political instructions rather than following the constitution. Keeping this personnel in place does not inspire hope that these bodies can now act independently of the executive or hold those in power accountable.

Hichilema is widely praised for presiding over a relatively open democratic environment. He has shown greater commitment to civil liberties and stopped the culture of violent political cadres operating in markets and bus stations. The climate of fear and lawlessness that characterised much of Lungu’s rule has all but disappeared.

Zambia’s new president has restated his commitment to the rule of law. Although he has walked back promises to repeal the repressive Cyber Security Act and the Public Order Act, long used by governments to curtail the activities of the opposition and civil society.

Hichilema has maintained plans to review the constitution although a roadmap is yet to be unveiled, enhance judicial independence, and improve the operations of the electoral commission. On corruption, his priority is to recover stolen funds, given that watchdog institutions lack capacity and the judiciary remains compromised. His choice of Chief Justice has also raised the bar in terms of judicial reforms.

Historically, State House has had five advisors to the president, responsible for press and public relations, economic affairs, political affairs, legal affairs, and policy and project implementation – each assisted by two deputies known as chief analysts. Instead of working through these existing offices, Hichilema has created a series of new advisory positions. These include State House Media Director, Special Assistant to the President for Public Policy, Special Assistant to the President for Policy Compliance, and State House Economic Advisor.

His motivations for doing this may be perfectly legitimate, but these actions have not been constitutional it is argued. The president is legally empowered to create new public offices, but only through the relevant commission or a specially designed statutory instrument, which has not been the case. It is also concerning that most of these appointments have not been announced and only a few have taken the oath of office publicly, as required by the constitution.

President Hichilema is criticised for his excessive foreign travel. He had made a total of 13 international trips within his first five months in office, something he heavily criticised his predecessor over. He has travelled to Belgium, Botswana, Democratic Republic Congo, Ethiopia, Malawi, South Africa, United Kingdom, United States, Vatican City and twice visited Malawi and South Africa.

He has not paid adequate attention to the domestic situation and it worries Zambians that he seems to believe that Zambia’s problems can best be addressed with foreign intervention without prioritising homegrown solutions.

Hichilema has defended his trips arguing that since the President assumed office, the expenditure on international trips had reduced and led to Government saving monies which are channelled to needy areas.

In opposition, Hichilema vowed to depoliticise the civil service and fill it with qualified, competent, and experienced professionals. While he has yet to announce any reforms that would help achieve this, he has taken several steps that undermine the service.

First, the new president destabilised it through a nearly wholesale dismissal of permanent secretaries, the most senior officials tasked with advising ministers and implementing policies. It is unlikely all those sacked were incompetent, unqualified, or corrupt so their removal was likely due to their perceived political affiliation.

Second, Hichilema has appointed several individuals who lack civil service experience or even relevant qualifications. They appear to have been recruited due to their loyalty and are therefore more like Partisan Secretaries, who will last as long as their party is in power than Permanent Secretaries. A controversial appointment of an outspoken party spokesperson to the position of Director for Media who also doubles as government spokesperson has brought further confusion in the flow of government communication.

Third, Hichilema has centralised power by creating several new positions around the presidency in a move that demonstrates his lack of faith in the civil service and his desire to run the government from the State House. The creation of these parallel positions, many of which already exist in the civil service, undermines existing officials, leads to the duplication of functions and is an inefficient use of public resources. Worse still, many of those appointed to this “mini civil service” lack the relevant qualifications for their roles.

Hichilema is also criticised for failing to reflect diversity. One key criticism of Lungu’s rule was that he marginalised Zambians from Southern, Western and Northwestern provinces – regions that have historically voted for Hichilema. 26 of his 32 cabinet ministers, for instance, were either from the Chewa-speaking Eastern province or from one of three Bemba-speaking provinces. This preference was also seen clearly in the top leadership positions of the police, army, air force, national service, and office of the president.

Hichilema promised to do things differently if elected but has barely delivered. All five heads of Zambia’s security services as well as the top positions in the National Assembly and judiciary are held by people from the regions that have traditionally voted for him. His 27-person cabinet is relatively representative of Zambia’s ten provinces, but areas that have historically voted for PF are grossly underrepresented while 16 ministers come from ethnic groups that have typically formed the core of Hichilema’s base.

The new president’s record on other forms of inclusion is even worse. Even though the constitution calls for equal gender representation in public offices, just five cabinet ministers are women, which is half the figure under Lungu. To address electoral imbalances, the constitution allows the president to nominate eight persons to parliament, but Hichilema filled all the slots with men except one. Only one of Hichilema’s ten provincial ministers is female. He has further made no appointments of either youth, constitutionally defined as someone between the ages of 18 and 35, or persons with disabilities – a clear violation of the constitution.

Although Hichilema seems comfortable with his seemingly good level of popularity, the young people are heavily expectant that things would improve and their discontent presents a huge challenge to his stay in power beyond 2026.