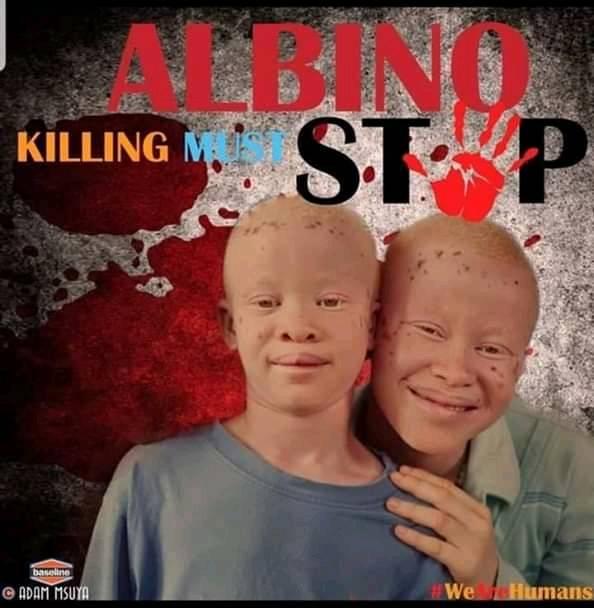 Parents of children born with albinism across Zambia are having to employ extra security for their children following a number of cases in which people with albinism  are being killed or brutally attacked by suspected ritual killers. Fortune seekers believe that using albino body parts can make one rich.

This myth has led to many people with albinism being killed for their body parts. In the latest case, a seven year old female with albinism in the mining town of Kitwe lost her left arm and hair after three assailants broke into her family house.

Dorothy Mulenga, a Grade One pupil at Mutupa Primary School, was sleeping with her sister and parents when the three assailants stormed their house in rural Kitwe and snatched her in the dead of the night.

“The three men were armed with machetes, they broke the window, jumped into our house and grabbed my daughter. They threw her outside and ran with her towards the bush,” said Joseph Mulenga, a 27 year father who witnessed the attack.

Mulenga says as he and his wife pursued the attackers, they sliced off the left arm of the child and dropped her 100 meters away from the house. The family said they are living in fear and are asking the Zambian government to guarantee safety for people with albinism.

A visit to the family house revealed a trail of blood from the house to a nearby bush where the girl had been dumped by her attackers – the attackers have not been found, four days after the attack.

The case has brought a lot of good will from civic leaders, human rights activists and other well-wishers who have donated money and material things to support Dorothy and her family. Dorothy spent three days in the Intensive Care Unit of the Kitwe Teaching Hospital and she was only moved to a general ward on Friday.

Due to worries about ritual killers striking again, the juvenile is being guarded while in hospital and access to her is strictly supervised.

Another recent case of an attack on an albino happened in October this year – a 39-year old man was murdered in the eastern Zambian town of Nyimba in a night attack by ritual killers. The attackers used a knife to cut his throat but villagers intervened before the attackers could get any body parts. The villagers pursued the attackers who were at the time dragging the albino to a nearby bush.

The attackers scampered in all directions upon seeing the villagers in pursuit.

“The deceased was attacked while he was sleeping in his grass thatched house and in the process his throat was completely cut and was stabbed twice on the left side of the chest” said Zambia Police Service Spokesperson Esther Katongo.

After intense investigations, police arrested four people, including a married couple  believed to be the masterminds of the murder. The suspects have been charged with murder and are scheduled to appear in court in the coming week.

Meanwhile, Chief Ndake of the Nsenga speaking people of Nyimba has immediately summoned all his Headmen in the area to sensitise them against the myth that albino body parts are a lucky charm.

In an interview with the Zambia News and Information Services which has been shared widely to all media house in Zambia, the traditional leader expressed shock that such a gruesome murder happened in his chiefdom. Similarly, a clergyman in the region has called for citizens to protect all albinos from ritual killers.

“They (albinos) just have a deficiency of scientific attribute that makes them look the way they look but in terms of humanity, they are as good as anyone else and they should be left alone to do whatever they want,” said Bishop William Mchombo of the Anglican Diocese of Eastern Zambia.

Another attacked took place in northern Zambia where a 73 year old woman with albinism had her fingers cut off and a tooth removed, in July. Three suspects were arrested for the attack, including a grandchild of the attacked woman. The suspects are still appearing in court while the victim has been relocated from her village for safety.

Over the years, the Albinism Foundation of Zambia (AFZ) has been supporting and relocating many albinos who are attacked or those who are not safe. The organisation says most of these attacks are carried out by ritual killers and people who sale albino body parts to buyers both locally and abroad.

“Most of the cases where albinos are being attacked are happening in rural areas because there is lack of security. We note that these cases are increasing because there is trafficking of body parts from one country to the other,” said AFZ Executive Director John Chiti, who is a prominent Zambian musician.

He goes on to explain that in Chama, a town which borders Malawi, a young girl was attacked last year and one of her hands was chopped off. Mr Chiti says with the help of the police, the hand was recovered in Malawi and this proves that trafficking in albino body parts is an international activity.

“We are asking the Police to do their job and ensure that people attacking albinos are brought to book. To the families of albinos, please stay safe, take care of the children because our lives are in danger due to these ritual killers who are after us,” he added.

Generally, these killings and attacks are new in Zambia, for years people with albinism lived freely in Zambia.