Home » General » Another march of Christians violently repressed in the DRC

Another march of Christians violently repressed in the DRC 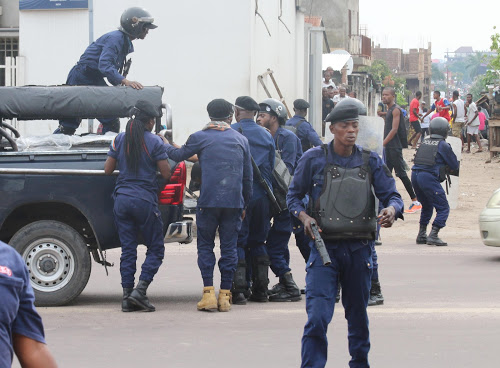 In the past, the greatest enemy of the Congolese people was the fear. Today, we can say that the Congolese population has conquered fear and is now determined to assert its rights. It needed effective leadership to take its destiny. This leadership is now embodied by the Catholic Church. Parishes and places of worship have become fortresses where the population is hiding to demand democracy and the departure of President Joseph Kabila.

The Church is now frightening Kabila, that is why the regime has never authorized the peaceful marches decreed since last December by the lay committee of coordination, a structure of Catholic Christians. But the protest does not weaken despite the severe repression carried out by the police and the security services. This was the case on Sunday, February 25th 2018

The march of the Christians on February 25, 2018 was violently dispersed by the police in Kinshasa and in several cities of the country. In Kinshasa, the police used tear gas, batons and real bullets around of several churches. The Catholic Church counts three shot dead including a pro-democracy militant Rossy Mukendi killed at close range in the commune of Lemba. Several périple was wounded in some districts of Kinshasa. The third death of the day was in the city of Mbandaka, Équateur province where a young protester was shot by a police officer who fled.This assessment remains provisional. Young people members of the party in power, dressed in red berets, tried to demobilize the Church Saturday night in Kinshasa, besieging Notre-Dame of Congo cathedral but without success.

The protesters demanded the implementation of the agreement of New Year’s Eve, the agreement signed on December 31, 2016 which established the organization of elections by last December. Face the evident willingness of the regime to play all the time extensions, Christians have come to require simply the departure of Joseph Kabila. “Kabila must go” or “Transition without Kabila” is what could be read on a few signs of protestors.

Other religious denominations of the DRC joined the march, especially The Protestant Church and some members of the Evangelical Churches. In Kisangani, a city situated in the north-east of the country, the march of Christians were also brutally dispersed with tear gas and live ammunition by security forces. Three Priests were arrested and taken away in a police jeep. The demonstration was also stifled in Mbujimayi, Goma, Bukavu and Lubumbashi second largest city in the country where a trailer truck was burned by protesters.

In Mbujimayi, in an interview with three local radio stations, the governor of the province had threatened the day before to put in jail anyone who dared to go down to the street to demonstrate this Sunday, February 25. “The prison is full but we will put you there so that you can taste what the prison means, “said the governor. A child was hit in the head and wounded by a bullet in this city.
Repeated Internet breaks

Another notable fact of this day of Sunday, February 25, 2018 is the Internet cuts. The Democratic Republic of Congo was deprived of Internet services and SMS from 9 am local time. It became a common and usual practice of the government at each protest hostile to the regime of Joseph Kabila. The repetition of these Internet cuts prompted eight Congolese NGOs to file a complaint a few days ago against four telecommunications companies providing internet in the DRC. Vodacom, Orange, Airtel and Africell.They criticize them for cutting Internet and SMS for political reasons and for several days, without refunding subscribers.This Sunday, February 25, 2018, it is the third cut of Internet and SMS in less three months in the Democratic Republic of the Congo.

The Congolese are identified now in the leadership of the Catholic Church that seems much stronger and credible than opposition parties. They believe that by inviting the Church in the political struggle, victory is certain. Because for them, when Kabila fights the Church, he fights God himself. And there, he precipitates his own fall.