Is Chimamanda Adichie a Postcolonial Theorist? 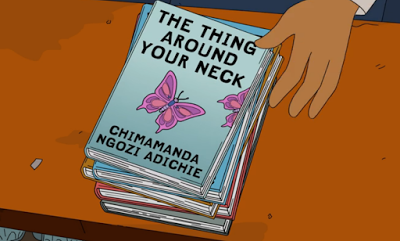 Grace A. Musila has reignited the social media debate on Chimamanda Ngozi Adichie’s controversial comments on postcolonial theory during a recent interview. “As an academic”, the associate professor in the English Department at Stellenbosch University in South Africa informs us, “I am grateful for the interview, which eloquently demystifies postcolonial theory, despite her disavowal of it.” She then eloquently unpacks how “the interview makes for an excellent introduction to this theory.”

From the outset, it is clear that the piece is a defense of both postcolonial theory and theorists. Why shouldn’t it be? After all, the two have been the cornerstone of literary criticism in departments of English, Comparative Literature and even African Studies.

It is thus not surprising that Musila invokes the Kenyan author of Migritude, Shailja Patel’s tweets that chided Adichie for not paying homage to what, it seems, has become a postcolonial canon. I am particularly interested in this tweet that she did not quote directly:

“That post colonial theory Chimamanda derides as ‘made up’? Is what got books by African writers on the  national curricula in African countries. So she can say, calmly, “my books are read in schools in Nigeria, and across Africa.”” – Shailja Patel

At the heart of this tweet – and Musila’s own affirmation that “Adichie is a beneficiary of the space-clearing labour of generations of postcolonial theorists” – is that it is postcolonial theory that really made it possible for African writers to be read. “Who put Purple Hibiscus on college reading lists and syllabi”, Patel queries elsewhere about Adichie’s writings, “catapulting the first novel of an unknown Nigerian writer to critical and commercial success? Academic feminists, versed in post colonial theory.”

One is thus questioned for not (re)affirming herself as a product – or even byproduct – of  postcolonial theorists. It doesn’t matter that Adichie has oftencelebrated what Patel describes as “labours and struggles of many scholars, past and present, carved out the spaces where her voice could land.” It is not enough – and it does not matter – that, for instance, she once penned this poetic tribute:

We are able to speak because you first spoke.

Thank you for your courage.

Thank you for your art.

Her postcolonial critics would only be appeased if she says, I am able to speak because this and that postcolonial theorist first spoke. Indeed, this is how Musila puts it: “When Adichie affirms in the interview ‘I think of myself as coming from a tradition,’ and names her literary precursors, she overlooks the feminist and postcolonial theorists who made her possible. They are part of her lineage.”

Musila seems to subscribe to that idea that it does not matter whether you call yourself this or that. For her, at least it appears so in this instance, if it quacks like a duck then it is a duck. But, to borrow the parlance of a pioneering postcolonial theorist Gayatri Chakravorty Spivak, can a duck speak? Or can a swan speak and say it is not a duck or a descendant of ducks? But Adichie can.

Yet, she either has to be silenced or be spoken for and thus be told:

“Oddly, the irony of dismissing postcolonial theory after a clapback against stereotypes cannot be lost on anyone familiar with Adichie’s fiction and essays. Those of us aligned with feminist theorist Pumla Dineo Gqola’s insistence that creative works theorise, consider Adichie’s writing to be acts of theorisation. We also hear echoes of our literary foremothers’ rejection of the tag “feminist”, when their works were decidedly feminist” – Grace Musila

Decidedly, even Frantz Fanon, the author of ‘A Dying Colonialism’ and ‘Towards the African Revolution’, does not have a say here:

Such a totalizing imposition of an otherwise ‘post-totalizing’ theory is, quite frankly, beyond irony. It probably explains why Adichie joked about professors inventing postcolonial theory to get jobs. For sure “humor”, as Musila aptly puts it, “is rarely innocent.” However, by concluding “Adichie’s quip about postcolonial theory is revealing about her low regard for academics,” Musila shifts the gaze from Adichie’s main bone of contention: postcolonial theory.

Useful as it may seem to be, the theory has rubbed a number of radical African scholars and writers the wrong way over the years. Adichie is thus not the first one to find it problematic. Some critics on twitter alleges that she does not know what it is. One can sense they missed her ‘tongue-in-cheek’ that Musila has aptly noticed. Even Adichie’s clarification on the irony on another question in the interview indicates that a lot might have been lost in translation.

Numerous book reviews and academic texts have applied postcolonial theory to analyze Adichie. Musila’s own article revisited herein is a testament of that practice. Adichie has also taken an MA in African Studies at Yale University and MFA in Creative Writing at John Hopkins University. These academic fields in Euro-America, as Paul Tiyambe Zeleza’s critical review of ‘The Troubled Encounter Between Postcolonialism and African History’ among others indicates, are highly influenced by postcolonial theorists. It would thus be premature to presume a professional writer is not aware of, let  alone not have a position on, that theory.

To get the gist of this troubled encounter let us revisit some tweets  from Wandia Njoya whom Musila does not invoke at all although she responded to Patel’s tweets. Her take is particularly interesting given that she also graduated from a graduate program in the Euro-American academy that privileges postcolonial theory. She writes:

“Postcolonial theory, especially the version popular in the Eurocentric academy, winks at imperialism by critiquing it but never adding the voices of those it defends,  but most of all,  rubbishing nationalist and material struggles as an exercise in futility and reverse hegemony” – Wandia Njoya

Elsewhere Njoya affirms that she is “also deeply suspicious of that theory” and, after encountering Musila’s article, reiterates: “I agree with Chimamanda that post-colonial theory is a creation of Third World scholars in the belly of the beast searching for relevance.”

Is Njoya simply defending our very own as some critics allege of those who defended Adichie? Am I? The jury is out, but, all I know is that for some us this is less about Adichie  – whom we also find problematic in the capitalist “commodification” sense that Sisonke Msimang aptly unpacks or her imposition on transwomen  – and more about our contentions with postcolonial theory that was thus shoved in our brains throughout graduate school in Euro-America:

“As an African student in the US academy, post-colonial theory was oppressive. At one point I was told that my writing language didn’t sound theoretical enough. Looking back, I think it was designed to prevent African students from connecting with African-American scholarship … the post-colonial canon gave me so much grief because people who believed in it considered political and material critiques of empire anti-theoretical. Spivak told us it was impossible for the subaltern to speak and the rest of us were native informants…. The point of postcolonial theory was to hide behind big language and words with many slashes and hyphens that made reading the work so difficult. And then I used to think I was the daft one until I read Prof Zeleza’s work, and I realized the work was deliberately unclear” – Wandia Njoya

Yet, understandably, the reaction that Adichie’s joke has sparked among the ardent champions of postcolonial theory highlights how invested it is. When such champions unfollow, block or even insult their debaters on twitter, then you know how much that theory and its theorists matter. It shows that the colonial moment is not over.

Perhaps it is calling us to rephrase Kwame Anthony Appiah’s philosophical question: ‘Is the Post- in Postmodernism the Post- in Postcolonial?’ Such a rephrasing could thus read: Is the post in postcolonial theory the post post-independence Africa? To that some of us would say, nay! Why? Because ‘post’ is not synonymous with ‘neo’ in neocolonial Africa. Perhaps such a response is what Ama Ata Aidoo had in mind all along when she was quoted as saying: “Applied to Africa, India, and some other parts of the world, ‘postcolonial’ is not only a fiction, but a most pernicious fiction, a cover-up of a dangerous period in our people’s lives.”

Do we thus throw the postcolonial baby out with the neocolonial bathwater? Yes, if it continues to do what Zeleza thus sums: “In effect, postcolonial theory perpetuates, indeed reinforces, the Anglocentric orientations of old Commonwealth criticism it claims to have transcended.” No, if it actually does what Musila thus qualifies: “If postcolonial theory is concerned with salvaging futures scarred by imperial greed….” And how can it do that if its practitioners imperially impose it as an alternative grand narrative on African writers and theorists who have opted to distance themselves or dismiss it due to its ideological complicity?

Let me end by quoting a response from a critic of Adichie’s quip:

“To be a fan of someone, of something, is a terrible thing. It is an obsession which disregards the person, the thing, one chooses to be a fan, of. A person says I am not a scholar, I am not a theorist, but no: we are your fans, we decide that you are a scholar, a theorist” – Bwesigye bwa Mwesigire