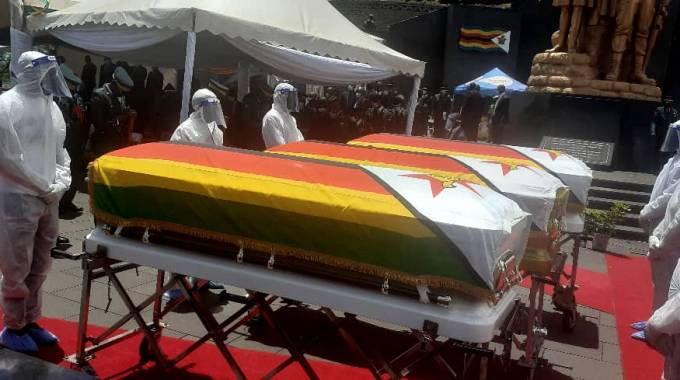 One year after the first recorded cases of COVID-19 were reported in Wuhan, China in December 2019, the world is experiencing a second wave of the deadly COVID-19 pandemic with the emerging new variants leading to a rise in infections and deaths.

However, even with the emergence of the new variants, the rate of infections and deaths in Africa remains low as compared to the other continents.

Whereas in 2020, the U.N. Economic Commission for Africa in April predicted that the COVID-19 would spread like wildfire in Africa estimating 300,000 deaths by end of 2020, citing crowded cities where social distancing is impossible, poorly funded health sector and lack of testing facilities etc, it seems it has not happened as predicted.

Basing on the statistics, it seems the first wave of the coronavirus had less impact than predicted and to date, death rates haven’t met those worst-case scenario predictions as compared to Asia, Europe and Americas. The case-fatality ratio (CFR) for COVID-19 in Africa is lower than the global CFR.

Consequently, some theories are suggesting that those numbers might not actually reflect the reality on the ground due to a variety of reasons. Central to the argument being pushed suggest that testing for COVID-19 cases has been comparatively limited on the continent, which could be contributing to lower case numbers.

However, as the debates continue whether COVID-19 has had much impact on the continent or not, the realities on the ground are that though still low, the second wave is claiming lives more than we anticipated and this has exposed many governments in Africa for lack of preparedness and uncoordinated response mechanisms. With previous outbreaks of Ebola and Cholera etc we are still found wanting with our lack of preparedness.

As this is happening countries in the developed world, in particular the United States, Europe, China and Canada are running vaccination campaigns and inoculating their populations. In Africa, it seems we are always lagging behind and still negotiating with foreign governments for vaccines, why is that so? One wonders what the Africa Centres for Disease Control and Prevention,  (a public health agency of the African Union to support the public health initiatives of member states and strengthen the capacity of their health institutions to deal with disease threats) is doing, what are our scientists, researchers doing? Since time immemorial we have been waiting for vaccines from outside the continent and now with conspiracy theories flying around on the negative effects of the vaccines, the question still stands why Africa has been failing to come up with its own vaccines compatible to our situation.  In countries like Zimbabwe, the government is said to have approached Russia and China for Covid-19 vaccines as the country battles to contain the spread of the virus which has claimed 3 cabinet Ministers in 10 days.

Whilst the country is on a 30-day hard lockdown with a 6 am to 6 pm curfew, with a surge in infections in particular in the first 2 weeks since the beginning of the year, hospitals have been failing to cope. From a public health perspective 2020, the imposed lockdowns were more proactive with concerted efforts being made to arrest the spread of the virus. However, from a socio-economic angle, some would argue that the lockdowns are failing to work due to their economically destructive nature. It should be noted that the purpose of the lockdowns is to curb transmission of the virus and it should be a time for the state to prepare hospitals, source supplies and learn from treatment innovations perfected elsewhere. But instead, a lockdown which is not supported by the rolling out of a mass testing campaign, provision of personal protective equipment, capacitating and expanding facilities, the fight against the pandemic will remain a pipe dream.

Furthermore, concerns have been raised in the manner in which the lockdowns are being enforced, and instead of it being a mitigatory public health issue lockdowns become security issues, police heavy-handedness to those found violating the regulations. In reality, the COVID-19 lockdowns have proven to be an opportunity for insecure regimes to close the democratic space.

In the same light, and despite the lockdown, the rate of infection is going down but deaths continue to rise with many people are dying at home due to the inaccessibility of health facilities due to exorbitant fees, the lack of adequate infrastructure and equipment to treat COVID-19 patients etc.

And as we wait for the Russia/China vaccines a government official, Robert Mudyirama, the Head of Monitoring and Evaluation in the Ministry of Health and Child Care, announced that government was failing to procure enough Covid-19 vaccines adding that of the 3 Million doses set to be acquired under the COVAX scheme, would be prioritized to frontline health care workers, ministers, Members of Parliament, the security sector and senior government officials.

Though the government has backtracked on this announcement, such a move would not only have been shocking but very disturbing and priority should be given to high risk or vulnerable groups. In doing so, the government must ensure that there is equity, fairness in the rolling out of the vaccines and they should appropriate funds towards this initiative. The government of Zimbabwe should ensure a people-centred approach in the provision of health care, ensuring free testing, free PPEs and free vaccination should the vaccines come to the country.

However, as it stands it seems there is no clear plan to deal with the virus despite the lockdowns. Public health facilities remain deathbeds with ill-equipped facilities, poor remuneration of the health workers etc.

The country’s health delivery systems are dysfunctional as far as promoting the provision of core health services because of the nationwide economic decline, corruption and staff attrition.

It should thus be the responsibility of the Africa Centres for Disease Control and Prevention, our governments and mandate to institute reforms and the creation of a Public Health Emergency Taskforce to guarantee a rapid response to outbreaks and emergencies on our continent. This should be complemented by robust mechanisms to strengthen the surveillance and response systems, as one of the major priorities.