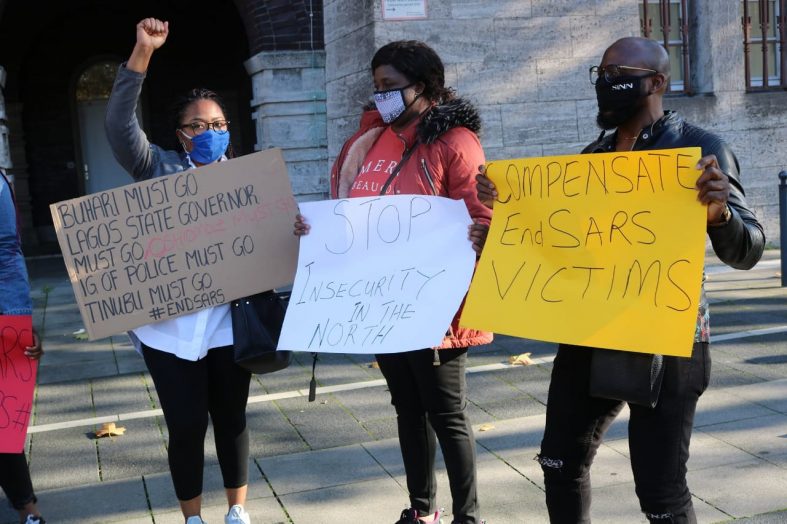 Why the #EndSARS Protest?

The protesters were demanding the disbandment of SARS, a unit the police formed in 1984 in response to a surge in armed robbery during an economic recession. But SARS had quickly become notorious for brutality and criminality, including arbitrary arrests, extortion, torture of suspects and extra-judicial killings.
Following previous uproars against its operations, police authorities announced the disbandment of the unit on three occasions, but SARS always refused to stay dead and its officers had persisted in their atrocities.

How did the protest begin?

The protest began almost spontaneously on social media under the #EndSARS hashtag after an incident in Ughelli, Delta State on October 3, when a man under arrest reportedly fell off a moving police vehicle and died. Angry youth in the state took to the streets and continued their protests even after the Minister of State for Labour, Festus Keyamo, who is from Delta, said the victim was alive and Vice-President Yemi Osinbajo vowed that the police officers involved would be punished. The protests soon spread to other cities, including Lagos where entertainment personalities joined a procession to the State Government House.
The death on October 10 of a protester in Ogbomosho, allegedly from a police bullet, sparked further outrage with the youth pouring onto the streets in more cities across the country.

How did the government respond?

Realizing the magnitude of the anger, the Inspector-General of the Police, Mohammad Adamu, on October 11 announced the dissolution of SARS. He added that the government would carry out a comprehensive reform of the police. Mr Adamu later announced the formation of a new unit, the Special Weapons and Tactics (SWAT) team, to replace the dissolved SARS. The Nigerian governors’ forum also pledged to address other demands of the protesters.
But the protesters refused to leave the streets. Instead, they issued fresh demands. After a meeting with Lagos State Governor Babajide Sanwo-Olu in Abuja, President Muhammadu Buhari said he had accepted the five-point demand of the protesters. But his plea for an end to the protest was ignored.
Amid the stalemate on October 12, Amnesty International said at least 10 persons had died during the protest. It later reviewed the figure to 56 deaths.

No national consensus on SARS

However, while the protests roiled cities across the south, it slowly became obvious that there was no national consensus on SARS. Northern governors were at best ambivalent on the scrapping of the unit with some of them praising its role in fighting violent crimes in their states. Northern youth also mostly stood aloof from the protests. Until the looting of government warehouses nationwide, there were only sporadic cases of protests or violence in the north.

The dichotomy widened when pro-SARS protesters began to appear in Abuja and some northern cities, leading to violent clashes between the opposing sets of protesters in Abuja on October 14, during which cars and shops were set ablaze. On October 15, hoodlums also disrupted #EndSARS protests in parts of Lagos. Those incidents were replicated in a few other cities and set the tone for the violence to come.

The incident that perhaps triggered widespread mayhem occurred on the night of October 20 at the Lekki toll gate when soldiers sent out to disperse protesters who had camped at the facility for almost two weeks allegedly shot some of the protesters.

The initial accounts were of a massacre. Obianuju Udeh, better known as DJ Switch, who live-streamed the incident, claimed she counted about 78 bodies after the shootings, she later revised her estimate to at least 15 bodies.
The report ignited outrage across the world, with American Democratic Party presidential candidate, Joe Biden, and a former First Lady and Secretary of State, Hillary Clinton, among world figures who instantly upbraided the Nigerian government for allegedly turning guns on its own citizens.

But the Nigerian Army dismissed the incident as fake news, claiming no soldier was at the venue. Lagos Governor Sanwo-olu who went round hospitals the following day said he saw three injured persons but confirmed no death from the incident. He later confirmed that CCTV footage showed “men in military uniform” at the scene.
Premium Times did an investigation on what really happened and it can confirm that not only did soldiers open fire on peaceful protesters and cart away corpses, so did the police.

Under the pretext of the protest, hoodlums and criminals descended on cities across the country, targeting food storage facilities, malls, banks and public facilities with many state governments imposing curfews in largely futile attempts to stop the looting.

It remains unclear how the #EndSARS protests would end even as former leaders and others have called for dialogue between the protesters and government. Many states have also set up judicial panels on allegations of brutality by officers of the disbanded SARS.

In spite of the seemingly lukewarm attitude of people in the north to the protest, a former Kaduna senator, Shehu Sani, however, said the protest has “triggered” some people in the region “to make demands which were not so before.”

On the impact of the protests, Mr Sani said a strong message had been sent to the ruling class. “There is going to be a bigger protest than this in the future,” he warned. Leaders of self-styled “leaderless protests” on their part confirmed that these incidents are only the beginning of a youth-led democratic movement for wholesale reform of the Nigerian state and have called on their followers to organize for grassroots political change.

The governorship election in Ondo State on October 10 followed the pattern set about three weeks earlier in neighbouring Edo. The poll went relatively smoothly and returned the incumbent governor, Rotimi Akeredolu of the All Progressives Congress (APC) as predicted in our analysis.

Mr Akeredolu ran against 16 opponents, including his deputy, Agboola Ajayi, who had defected from the APC to challenge his boss on the ticket of the Zenith Labour Party. But Mr Agboola did not make the impact predicted by other pundits who had projected a tight three-horse race. He returned a distant third behind Eyitayo Jegede of the Peoples Democratic Party who himself came a distant second as Mr Akeredolu won the race almost by a country mile.

Mr Akeredolu won in 15 of the state’s 18 local government areas, leaving Mr Jegede with the remaining three.
As in Edo, the fears of violence disrupting the poll turned out to be unfounded. Instead, the malaise here too was vote-buying, a phenomenon that involves the two major parties and remains the hardest nut to crack as Nigeria looks to shore up the integrity of its electoral process.

Still recovering from the devastating impact of the new Coronavirus pandemic, the Nigerian economy came under another brutal assault as the #EndSARS protests turned to mayhem. Protesting youth disrupted movement for many weeks before hoodlums took over, looting and burning public facilities and business premises. The International Monetary Fund says the protests may mar Nigeria’s growth projection.

And the protests came just as analysts were warning of the dire consequences of the plan by the federal government to take over USD 4.10 billion fresh loans to fund the deficit in the 2021 budget proposal.
Before the protests, the main concerns had been over a threat by the labour unions to call a strike over the increase in the prices of petroleum products and electricity tariffs. A truce was reached in the negotiation between the government and labour leaders when the government agreed to subsidise electricity tariffs for some categories of consumers for three months while the CBN is also funding a mass metering scheme for the electricity distribution companies.

However, in a more positive development amid the #EndSARS protest upheaval, Stripe acquired a Nigerian startup fintech company, Paystack, in a deal reported to be worth over $200 million.
Some rural women also offered Nigerians something to cheer from their ambitious endeavour in the agriculture sector .

With the Covid-19 curve now on a southward bend in Nigeria, attention is shifting towards other health issues. One of them is malaria, Nigeria’s deadliest killer disease. A report showed how malaria within four months killed 121 under-five children in some hospitals in the country.

Under a policy formulated to boost interest in the teaching profession and improve the quality of teaching in Nigerian schools, the federal government said it would be paying a stipend to education students and offer them automatic employment after graduation. The government did not state how this will affect the thousands of unemployed and underemployed graduates in the country, many of whom are forced to accept pittance to teach in private schools because they are not being offered employment in the public sector.

The feasibility of the programme came under further doubt when it was observed that allocation to the education sector in the 2021 budget proposed to the National Assembly by President Buhari is the lowest in the last 10 years.
In two investigative reports, Premium Times continued its exposure of how corruption and scant regards for the public procurement laws have marred the efforts to revive Nigeria’s fallen railway system and how a legislator’s constituency project funded with millions of naira from the federal treasury to provide potable water for rural communities ended up in the home of a former head of state.