Want To Get Rich? – Join Politics 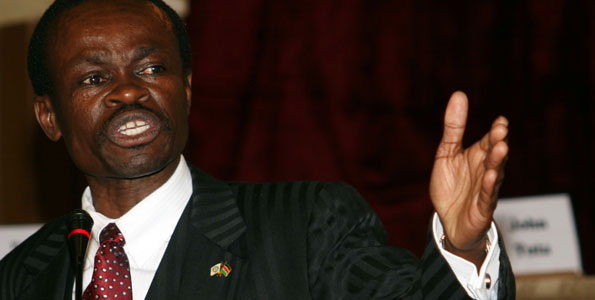 AFRICAN politicians long abandoned the idea of servant-hood. As famous Kenyan Law Professor Patrick Lumumba recently observed, in Africa, the shortest route to ill-gotten wealth is political leadership. Examples abound across the continent of Africa of how poor citizens continue to cough blood to sustain the lavish lifestyles of politicians. How much are these our new masters’ worth? Is it fair that the highest paid politicians in the world should be coming from some of the poorest regions of the world?

According to Professor Patrick Lumumba, almost all the people who move into politics in Africa do so with ill-intents to loot the coffers of the state and perpetuate their stay in office.

Speaking at the 11th series of the Kwame Nkrumah Memorial lectures at the University of Cape Coast in Ghana Prof Lumumba questioned the behaviour and the motives of politicians on the African continent.

“If you want to get wealth without working for it at all join African politics; that is the truth everywhere in Africa except for a few places. The only place that stands out now in that regard is Tanzania with President John Magofuli. The rest in Africa, I do not know…. Excuse me, I am a visitor,” the law professor said.

He bemoaned how many political leaders suddenly become rich after a short stay in office. According to him, it is outrageous for people to claim to provide service to the people only to turn into ‘vampires’ that suck the blood of the people.

“Our political leaders hunt and gather buildings and cars and money and that is why African leadership does not attract our best men and women. And the African electorate also responds to money,” he said.

Two developments have prompted me to call for a fresh reflection on this matter. The first is the decision by Zambians politicians a few weeks ago to award a hefty monthly allowance to ward councilors across the country. Both politicians from the ruling and opposition parties supported the motion to add a huge expenditure item to an already overstretched national budget given that Zambia has consistently ran budget deficits and is actively seeking external financing to help resolve its growing debt crisis. Zambian politicians do not care about the poor as long as they (politicians) look after each other. Maybe they are right when they say there is only one rule to remember in politics- “Never underestimate another man’s greed”.

They bowed to growing pressure from councilors many of whom helped to campaign for them in their constituencies. Instead of finding a more sustainable way to look at the welfare of ward councilors, Members of Parliament resorted to take the easy way out which was to transfer the burden of rewarding their political foot soldiers to the treasury. An analysis has shown that the Zambian Treasury will cough up a whooping K4.872,000 million monthly to pay all the 1,624 Councillors across the country. In one financial year, the Treasury will spend over 58 million to pay the Councillor’s allowances. That is more than the K35.6 million allocated to the rolling out of the School Feeding Programme in the 2017 national budget according to an analysis done on Lusaka Times.  Finance Minister Felix Mutati is reported to have hinted that the new increment was catered for in the 2017 national budget under the Local Government Equalisation Fund. But a further analysis shows that only K887.9 million has been allocated for Local Government Equalisation Fund in the 2017 national budget. Set up in 2014, the Local Government Equalisation Fund is a formula based funding mechanism where the Ministry of Finance sets aside 5 percent of revenue from Income Taxes to be channelled to funding Councils. With this break down, it shows that the Fund will now be chewed up in Councillor’s allowances leaving nothing for local government service provision.

The second reason why I am promoted to reflect on this matter is the decision by opposition UPND Members of Parliament to boycott the State of the Nation address by President Edgar Lungu. Many Zambians find their decision to abandon a half day session in protest against what they term as illegitimacy of the presidency because UPND President Hakainde Hichilema has not had his presidential petition heard before the courts as illogical. This is so because the same MPs have continued to draw huge allowances from the same government they pretend to not recognize. In whose interest are their actions? Zambian law makers are overpaid and have forgotten the suffering of the people. This is why they are ready to fight so hard to get back to parliament. Why are they willing to spend so much money to win an election? Has it not been repeatedly drilled in students of politics that it is an act to serve? How amazing that while the people of Zambia keep praying for unity among politicians to curb violence, constitution, and debt problems there is no unity, but all of a sudden there is unprecedented unity whenever politicians are awarding themselves an increment in allowances and other financial benefits.

To help with discharging parliamentary responsibilities, each MP draws a net monthly salary of approximately K23,000. This includes a special allowance, utility allowance and a motor vehicle maintenance allowance. There are also a few lucrative indirect benefits such as a monthly fuel entitlement of 500 litres and a standard sitting allowance of K1,500 per day for each parliamentary session and each committee meeting. This means that an MP can earn an extra K3,500-K6,000 per day depending on how many committee meetings and parliamentary sessions they attend. With parliament meeting three times a year for a total average of 140 days, this gives MP’s the opportunity to more than double their monthly salary from allowances alone. They are also entitled to an interest-free loan to import a duty-free car of their choice worth up to US$65,000.

At the end of their term, MP’s receive a gratuity of 100 percent of their total parliamentary salary which is paid out twice, once in the third year as an advance (the so-called mid-term gratuity) and the balance in the fifth year. The current MP’s are due to receive their mid-term gratuity in October. Depending on the distance to their constituency they could also receive a fuel allowance for attending parliament of up to K3,000 for the round trip. Accommodation while on parliamentary duty is funded by taxpayers including the cost of their stay at Parliament Motel (although, admittedly, it has seen better days).

Adding all this up, it is difficult to see how MP’s (many of whom have independent incomes through regular jobs, consultancies or successful businesses), can complain about their pay. One would assume that such a generous package is enough to enable them to attend to family demands and address constituency needs

High ranking politicians directly in charge of line ministries and developing policy to influence generations to come are referred to as Ministers, a term that literally stands for servants of the people. However even the lowest ranking politician today in Africa conducts him or herself with a lot of arrogance and pride more as a master and not the servant. African politicians have succeeded to earn themselves a reputation for amassing wealth they cannot explain and many end up stacking a lot of money in overseas accounts which many suspect to be proceeds of corruption and crime.  Some less innovative politicians as has been seen in Zambia even opt to bury their money underground.

According to an online repository MYWAGE, the highest paid African President was Jacob Zuma of South Africa with a yearly salary- $272,000. Zambia’s President, Edgar Lungu was captured among the top ten well paid African Presidents. Edgar Lungu earns more than $98,000 annually. In Zambia, the annual presidential compensation is K523, 340 ($68, 410) which includes a compensation of K414,406 and an allowance of K108,934.

Most people in Africa live in abject poverty and can hardly afford a meal in a day. But politicians make a lot of money a day. Apart from bare salaries which they earn ‘legally’, African leaders make money from bribes, travel allowances, sitting allowances, food allowances, entertainment allowances, children allowances, medical and other special allowances. These allowances actually are what make the politicians rich.

Many Zambians are still in shock at how President Lungu grew rich in such a short time.  Within 15 months of assuming office, Lungu’s wealth rose from kwacha 10.9 m to over 23 million.

Professor Lumumba is right when he says that the shortcut to access wealth in Africa is simply to join politics.