Home » Corruption » Whom Should Kenyans Blame For The Faltering War On Corruption?

Whom Should Kenyans Blame For The Faltering War On Corruption? 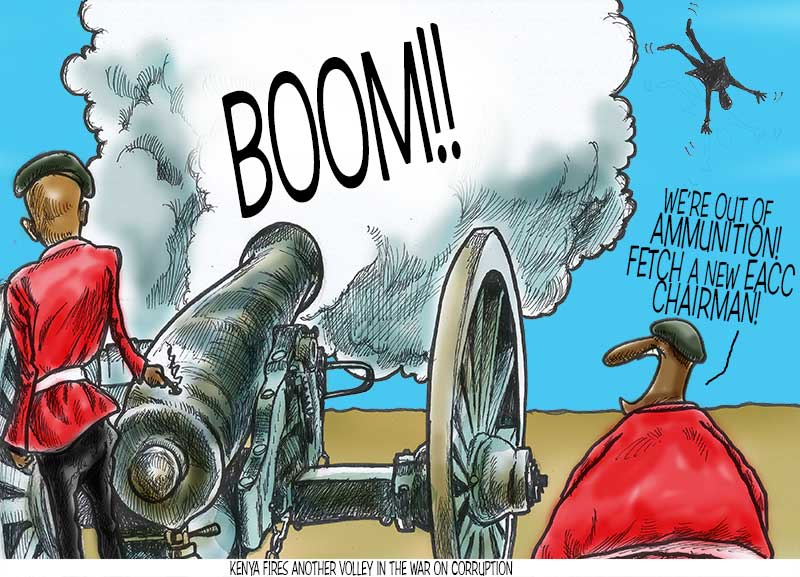 The resignation of Philip Kinisu as head of the Ethics and Anti-Corruption Commission caps off yet another week during which corruption and the faltering war waged against it have dominated newspaper headlines. In the aftermath of the Olympic games, ironically Kenya’s most successful ever judging by the number of medals our athletes gathered, revelations of theft and joyriding have demonstrated that Kenyan accomplishment comes in spite, rather than because, of their government.

Yet listening to Kinisu’s predecessor, the former head of the Kenya Anti-Corruption Commission, Dr PLO Lumumba, it is these very Kenyans who are to blame for the mess we are in. “Kenyans as a society have not demonstrated that they want corruption to be fought,” he claimed on Wednesday evening on the Jeff Koinange show.

This was perhaps not a surprising sentiment, given how Dr Lumumba was himself hounded out of office for trying to do his job. But as understandable as it may be, it is nonetheless profoundly misguided. He confuses Kenyan society for the state and Kenyans for those who claim to represent them but actually are little more than parasites sucking the lifeblood out of them. It is the equivalent of claiming that the fiasco in Rio was evidence that Kenyan athletes are corrupt.

Sadly, there is a failure within official discussions of corruption to distinguish between perpetrators and victims of corruption; a tendency to fault the latter for their victimisation. In 2005, then Justice Minister, and now Senator, Kiraitu Murungi, outraged many when he compared criticism of the government’s fight against corruption to “raping a woman who is already willing”, a remark he was to apologize for a few days later. It is unclear why Dr Lumumba, and his fellow guest on the show, publisher and columnist Barrack Muluka, appear to think that it is less outrageous to suggest that Kenyans are willing participants in the plunder of their resources.

As I have previously discussed on this column, studies on the nature of corruption have established that the vast majority of bribes paid by Kenyans are extorted by government officials for access or expedition of services that citizens are already entitled to. Reversing this violation of public trust will not be accomplished by appealing to the victims to change, just as rape culture will not be vanquished by asking women to behave differently.

Rather it is the perpetrators and their enablers and protectors within government that must bear the burden of punishment and change. In fact, later in the show, Dr Lumumba attributed the relative success of anti-corruption efforts in Nigeria, Botswana, Mauritius and Rwanda not to changes in societal attitudes towards graft, but to the willingness of their respective heads of government to “lead from the front”.

In Kenya, there is little sign that President Uhuru Kenyatta and his Deputy, William Ruto, are doing likewise. On the contrary, a survey of public perceptions of corruption recently released by the Africa Centre for Open Governance indicates a majority believe their offices to be the most corrupt. The fact is it is not the ordinary mwananchi who lacks the will to fight corruption but rather, the very people within government tasked with carrying out that fight.

The reasons for this are not hard to fathom. The political class, which benefits greatly from the vice, has the most to lose from any serious attempt to stamp it out. It is they, not ordinary Kenyans, who would be the primary targets of any such enterprise and can thus be relied upon to pull out all the stops to ensure that the EACC remains little more than a paper tiger. Whoever elects to take on the job of fighting graft must expect that he or she will be an enemy of the governing elite and, unlike Kinisu, must not present them with easy avenues of attack.

However, and more importantly, we must all realize that the war on corruption will not be won by scapegoating its victims but rather by harnessing their collective anger and outrage and directing it against the perpetrators. This means that the onus and pressure must be focused squarely on the person best placed to do this, the instrument of our collective force and he whom the constitution describes as the symbol of our national unity: President Uhuru Kenyatta.