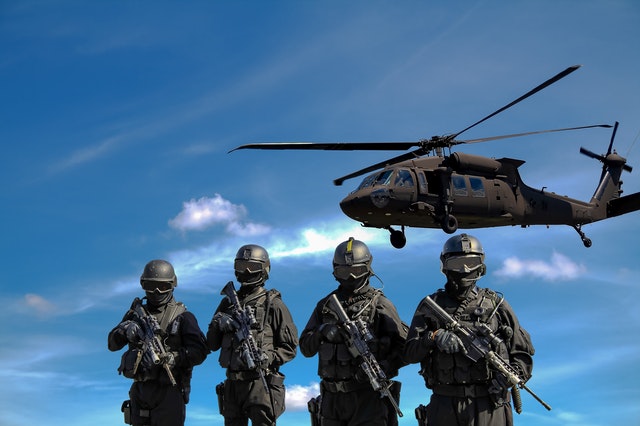 It is safe to say that it is officially coup season in Africa. It has been, for a few decades now, if one is to consider critically the events of the last three decades. The continent is uninterruptedly being treated to a rather lengthy series of coups which present more often than not in the same way; unrest in a country’s capital, sounds of gunshots ringing through the streets, missing and or arrested heads of state followed by breaking news with a uniform-clad soldier flanked by his juniors in a conference claiming responsibility for the coup for the purpose of restoring order and democratic rule.

Djibouti, DRC, Guinea, Niger, Comoros, Chad have all experienced the same trend in the last three decades and there are many more. The statistics certainly are not in favour of the continent with 30 coups in 31 years and three out of every four coups in the world occurring in Africa. According to a journal published by the Cambridge University titled African Military coups d’état, 1956-2001: Frequency, Trends and Distribution (Patrick J. McGowan 2003), between 1956 and 2001 alone there were 80 successful coups and a mind-blowing 108 failed coups in Africa. Why is there a reversal in the democratization process that had taken root in the continent? These figures had dropped by more than half by 2019 but a dangerous ascendance can clearly be seen throughout the African continent.

Africa is ailing from a very familiar illness, one that has plagued it for years. We may be living in different times but the problems that remain endemic in our governments are the same ones we have had since post-colonialism. Coup leaders usually cite the same issues: corruption, bad governance, poverty, inequitable distribution of resources, theft and so on. The recent coup in Guinea that ousted 83-year-old Conde decried deeply rooted corruption and poverty in the nation. Zimbabwe in 2017 and Sudan in 2019 had the same worn justifications for toppling over their governments. With median age currently at 20 years, Africa is the youngest continent and has the fastest growing population in the world. This means there is cutthroat competition for resources and the coronavirus pandemic has only worsened the situation in the already fragile continent.

The truth is that the crop of coups is receiving plenty of nurturing from these conditions; poverty, unemployment, bad governance. The result of this is a willing and desperate population of young people who are ready to take a chance with coupists. The radical nature of the changes proposed by coup leaders is far more appealing to the populace than the empty promises of leaders who get and hold onto power for decades. With such a volatile mixture, a coup is inevitable; the sometimes unpleasant aftermath notwithstanding.

Amid the push and pull between North and South Sudan that shaped the civil war in the country, Mr Bashir led a coup that seized power in 1989. His tenure was tainted with a number of war crimes especially during the Darfur crisis in 2003 when rebels took up arms in protest. Hundreds of people died as a result and Mr Bashir found himself indicted by the ICC. He was accused of genocide and charged with crimes against humanity. However due to a lack of support from the UN the case was suspended.

Fast forward to the 2011 referendum and the South (now South Sudan) broke away from the North (Khartoum), making away in the process with approximately 75% of the oil reserves. This meant severe financial repercussions for the North which was already in the red with innumerable sanctions from the United States. In a move to mitigate the financial crisis, the government turned to austerity measures and subsidies. Prices of commodities shot up and the populace began to protest. Opposition leaders were arrested, protesters violently dispersed and there was heavy censoring of the media. Mr Bashir was re-elected in the 2015election which the opposition boycotted.

By 2018, inflation in Sudan was at 70% and the value of the Sudanese pound was continuing on a downward trajectory. Come mid-April 2019 and following unending protests and demonstrations at the military headquarters, Mr Bashir was finally out and a military council took his place to facilitate the transition.

The transition government remained gossamer at best with the likelihood of failure remaining higher than any hope of the country pulling through. Even before the Covid 19 pandemic, Sudan was grappling with a number of issues post the Bashir era. Several regional actors provided conflicting and competing motivations for the country and the support from the international community was more than wanting. The revolution that saw Bashir being ousted was majorly driven by youth and women yet they were the least engaged by the transition government. With all these factors at play, an economy on its knees, push and pull in the transition council and the coronavirus bearing down on a country with poor health infrastructure, the events of September 21st were inevitable.

The dawn of September 21st 2021 saw the world wake up to the news of a thwarted attempted coup in Sudan. Sudan authorities were blaming factions loyal to former president Omar al-Bashir saying they were trying to derail the progress being made by the transition council towards the formulation of a democratic government. 21 officers and an unspecified number of soldiers had been arrested in connection to the attempted coup and more culprits were being sought out.

In his statement which was broadcasted on various television networks, Prime Minister Hamdok said, “What happened is an orchestrated coup by factions inside and outside the armed forces and this is an extension of the attempts by remnants since the fall of the former regime to abort the civilian democratic transition.” He went on to say, “This attempt was preceded by extensive preparations represented by lawlessness in the cities and the exploitation of the situation in the East of the country, attempts to close national roads and ports and block oil production.”

The coup had been led by the commander of the Armored Corps based in Al Shajara camp, Major General Abdalbagi Alhassan Othman Bakrawi, alongside 22 other officers.

This coup is symptomatic of the critical situation that Sudan finds itself in. Economic crisis, a rise in insecurity (there is an increased crime rate in Khartoum) and political uncertainty only pushes the country closer to the brink. Unfortunately, this state is likely to affect the rest of the horn of Africa.

In a statement to the press, the UN envoy to Sudan German professor Volker Perthes said, The United Nations condemns any attempt – whether a coup or otherwise – to undermine the democratic political transition process.”

Following the September 21 attempted coup, there has been unanimous dissent by citizens of Sudan. They are not in support of a return to military rule. Military rule would undoubtedly lead to a fresh outbreak of border conflicts, regrouping of militia and mobilization of armed groups. Sudan needs most urgently, major reforms in the security sector.

Eyes remain on key areas like Darfur, the Blur Nile, Southern Kordofan and the east which have been at the receiving end of the brunt of military aggression. Long overdue is the need to form and put in place conspicuously missing institutions; judicial organs, constitutional court and a legislative council. A more inclusive approach should also be adopted by the transition council to engage women and the youth.

While rumors remain rife regarding the actual source of the attempted coup, one thing is remarkable; the populace is steadfast in their desire for civilian rule over military rule. No coup, successful or failed is welcome to any state but the events of 21st September have been a revelation for Sudan. The transition is riddled with a lot of contestation and motivations both from within the country and without. The task that lies ahead while unenviable has to be completed. The leaders from the military and civilian sides have to find ways of working together to squash attempts by various centers of authority in the country, without upsetting the transition process.