Etienne Tshisekedi buried as a head of state in DRC 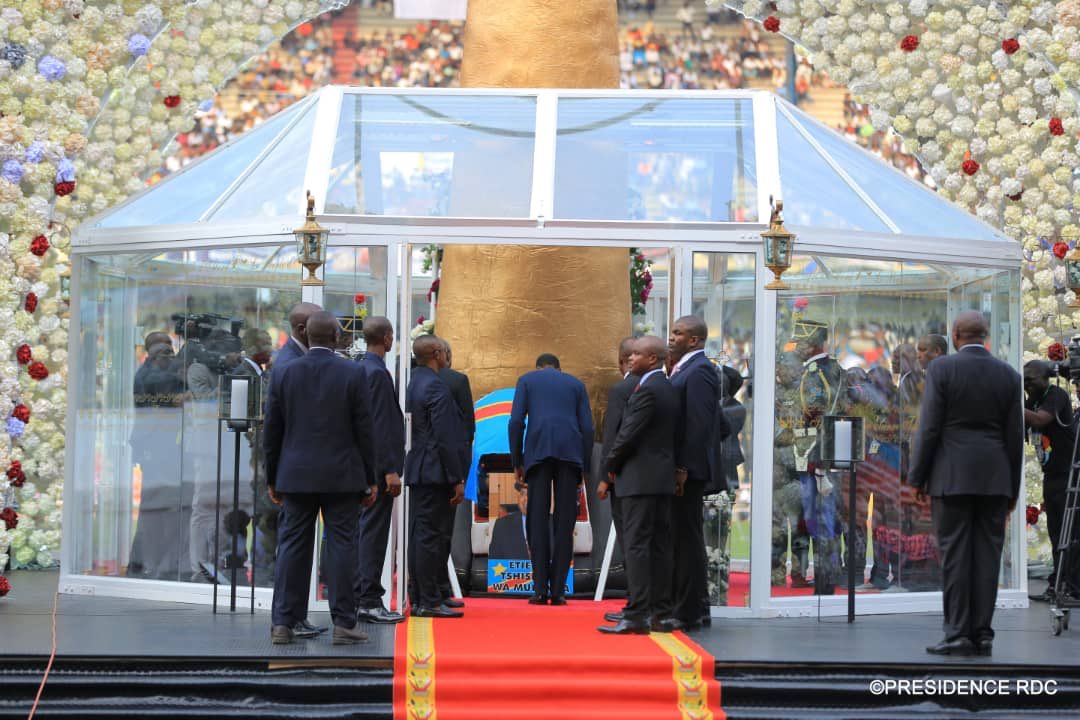 Never had an opponent been so honored in Africa. Generally, large and sumptuous funerals are reserved for heads of state who die in office. But in the DRC, we did just witness a rather lavish funeral of the former government opponent Étienne Tshisekedi. The country almost came to a standstill  during the three days of his funeral. This is proof that this man was loved by the people.

Several heads of state and international delegations took part in the funeral of Étienne Tshisekedi. He died on February 1, 2017 in Belgium.  His body was prevented from being repatriated to the Democratic Republic of Congo for two years because of disagreements between his party and Joseph Kabila’s regime. The body remained stuck in a funerarium in Brussels from February 2017 until its repatriation on May 30, 2019. Heads of State like Paul Kagame of Rwanda, Denis Sassou Nguesso of Congo Brazzaville, Joao Lourenço of Angola, Edgar Lungu from Zambia and Faustin Archange Touadera from the Central African Republic came to Kinshasa and bowed as they said goodbye to the body of the man who was nicknamed the Maximo leader and the sphinx of Limete. Egypt, Guinea, Uganda, Côte d’Ivoire, Morocco, Kenya, Zimbabwe, China, Russia, etc. sent delegations to be represented in Kinshasa.

The funeral was held at the Martyrs Stadium, the largest stadium in the country. It was a moment of strong national emotion. Interestingly, former president Joseph Kabila refused to participate in the funeral and that we can understand. He did not have the courage to  mourn the man he had persecuted all these years. He knows that his regime refused to repatriate the body of his opponent.

Étienne Tshisekedi was the man who opposed all the political regimes that have succeeded in the DRC since Marshal Mobutu, Mzee Laurent Désiré Kabila, to Joseph Kabila. He was the king of crowds, peaceful demonstrations in the streets, dead cities, and general strikes. He had one slogan: the people first. Etienne Tshisekedi was the symbol of peaceful resistance to the dictatorship of Mobutu and Kabila father and son. He also had unifying qualities. We remember that under Mobutu, he had campaigned for the establishment of democracy, multipartyism, freedom of expression and the convening of the national conference which was to bring together all Congolese political actors and civil society to decide how to proceed for the future of the country.

Several times, he was tortured and put in prison but Tshisekedi never betrayed his political convictions which were to defend democracy and civil liberties.

With his political party the Union for Democracy and Social Progress UDPS, Étienne Tshisekedi led under Mobutu a regrouping of the opposition called the ‘Union of the Radical Opposition’. And under Joseph Kabila, he managed to gather all the Congolese opponents in Genval locality in Belgium, including Martin Fayulu, personalities supporting Moïse Katumbi, and others.

In his political career, Etienne Tshisekedi was in turn deputy Minister of Justice, Minister of the Interior, twice Prime Minister buy most of the time, he was known as the opponent.

During his funeral, he was elevated to the rank of great cordon of the order of the Kabila-Lumumba national heroes in Democratic Republic of the Congo. He now rests in a mausoleum built for him in the family concession in the Nsele commune in Kinshasa. His fight was not in vain, because today it is his son Félix Tshisekedi who is the new president of the DRC.