Finally Moses Katumbi back in the DRC: long live the Congolese democracy! 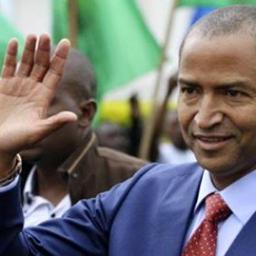 Who could imagine Moses Katumbi coming back home while Joseph Kabila was still in power? It was impossible, as the two men seemed to have sworn a mortal hatred. But after the departure of Kabila, a new wind is blowing on the country. The DRC is now open and political opponents are now entitled to the Congo.

Former Katanga governor Moïse Katumbi returned to the DRC on Monday, May 20, 2019 after three years of exile in Europe. It is by the city of Lubumbashi that he has walked on the soil of his country. Almost the entire city was at Louano airport to welcome him, proving that despite exile, Katumbi is still popular in the Democratic Republic of Congo.

The streets were full of people. Young people shouted: “Papa aye, nzala esili” (welcome back daddy, our hunger is over). The elements of the formerly brutal police were there to secure the followers of Moses Katumbi. If it was Kabila’s time, they would have been dispersed with batons, tear gas and live ammunition. This time it was different – long live Congolese democracy.

It’s a very good thing when the Congolese return home, whether they are opposition or not. The country belongs to all its sons and daughters, regardless of their political opinions. Moses Katumbi did not deserve the persecutions he suffered under Kabila’s regime. The former governor of Katanga embodies the peace and good management of public affairs. Moses Katumbi is undoubtedly the best governor that the province of Katanga has ever had. At the time, he was the only governor in office to openly oppose the temptation of a third term for Joseph Kabila. He was falsely accused for offenses he did not commit so hr could br arrested, Felix Tshisekedi presidency has  since cleared him.

“I thank the authorities for giving me my passport,” said Katumbi on his return. The leader of the Lamuka platform is also a rich businessman in Congo and Africa. He says he is not interested in any government job now. Some languages ​​even presented him as the future Prime Minister of Felix Tshisekedi. This was before the appointment of Prime Minister Sylvestre Ilunga. “I’m going to make a constructive, republican, but demanding opposition,” said Katumbi. Even if he does not say it openly,  everybody knows that this man has presidential ambitions for the 2023 elections.

On his return last Monday, Katumbi was accompanied by two other political exiles, Olivier Kamitatu and Francis Kalombo. The latter is a former MP who left Joseph Kabila’s People’s Party for Reconstruction and Democracy PPRD.

Thus, since the first peaceful alternation in power in the DRC, our country now seems to be frequentable. Several political prisoners have been released. We are also waiting for the return of Jean-Pierre Bemba in the coming days in Kinshasa.

Relationships with our neighbors, including Rwanda, Uganda and Burundi are no longer in conflict as in Kabila’s time. The DRC has regained its place among nations of the world. The disagreement with the European Union is over.

Welcome to the DRC!