Home » Democracy » Jean-Pierre Bemba is coming back to the DRC!

Jean-Pierre Bemba is coming back to the DRC! 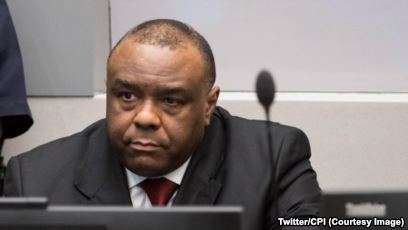 No one foresaw such a reversal of the situation. Jean-Pierre Bemba sentenced to 18 years in prison was suddenly acquitted by the International Criminal Court on Friday, June 8, 2018. He spent 10 years behind bars. The announcement of his acquittal has had a bomb effect on the whole world, but especially in the DRC. Scenes of jubilation in Kinshasa and several cities in the country were witnessed including Mbandaka in the former Equateur, his home province.

Jean-Pierre Bemba was arrested in August 2008 in Belgium following an arrest warrant issued by the International Criminal Court. The ICC was prosecuting him for war crimes and crimes against humanity committed by his militia in the Central African Republic between 2002 and 2003. At the time, the regime of the former Central African President Ange-Felix Patassé was threatened by a rebellion launched by François Bozizé. President Patassé  then invited Jean-Pierre Bemba’s rebel troops to help him in Bangui. During this intervention, several cases of rapes, massacres, looting and other crimes were committed and attributed to the men of Jean-Pierre Bemba. This led to his arrest in May 24, 2008.

But the former DRC Vice president had always claimed his innocence, stating that he was not in Central Africa at the time of the events and that he did not give orders on the troops lent to the Bangui regime, because they were placed under the control of President Patassé’s army. Nevertheless, Jean-Pierre Bemba was sentenced because of his responsibility as superior of his troops. In this case, it was interesting to note that only Bemba was prosecuted while the camp of President Patassé who had invited the Congolese militia was not touched until his death by the International Criminal Court.

The same scenario is imminent in Ivory Coast where only pro Gbagbo supporters are prosecuted by the ICC while the post-election crisis of 2010 also involved the camp of Allasane Ouattara.

Today the acquittal of Bemba creates a political earthquake near the presidential election of December 23, 2018 in the Democratic Republic of Congo. The leader of the Liberation Movement of Congo was the challenger of Joseph Kabila in the second round of the 2006 presidential elections. The prison was not right of its popularity. Bemba still has his charisma and influence on Congolese politics. His next return to the DRC will certainly change the political situation. The opposition will end up with several heavyweights leaders namely: Moses Katumbi, Felix Tshisekedi, Vital Kamerhe and as of recent Jean-Pierre Bemba. This situation will give Joseph Kabila alot of headache since his term ended in 2016 and he doesn’t want to leave.

Everyone has welcomed the acquittal of Bemba except Joseph Kabila. For him to wish good to his adversary, would not be Congolese. On the other hand, congratulation messages came from everywhere.  Moses Katumbi sent out a tweet :

“Congratulations to my countryman JP Bemba. His acquittal shows that the truth always triumphs. To those still using false trials, this decision marks the beginning of a new era of justice for the #RDC. Today is a great day for the Congolese! “

Felix Tshisekedi, son of the historical opponent Etienne Tshisekedi, said: “I am learning with joy and relief, the abandonment of the charges that weighed on JP Bemba. My first thoughts are with his family and his followers. His return to the Congolese political scene will undoubtedly be a considerable reinforcement for the alternation camp. Glory to God. “

The question that arises is whether Jean-Pierre Bemba will be free when the candidatures for the presidential elections are submitted. For despite his acquittal in the Central African case, he remains sentenced to one year in prison in another case known as tampering with witnesses. Whatever happens, many in the DRC want his return to Kinshasa to strengthen the opposition. Soon his MLC party will be in Congress probably preferring him as it’s candidate.

Will the Kabila regime let him stand for election?