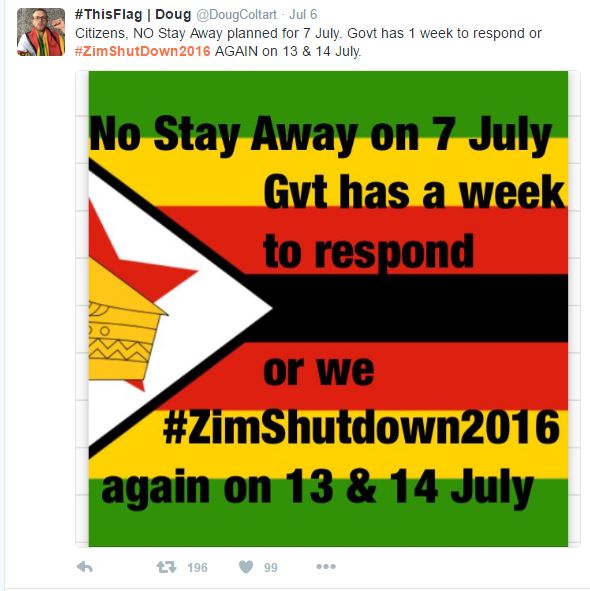 There are a number of causes and actors for the mass action that occurred in Zimbabwe on Wednesday, 6 July 2016. Some reasons being more immediate than others, and some actors being more key than others, but all contributing at varying levels to the national strike/shutdown (whatever you prefer to call it.)

The particular difference with this one-day mass stay away was that it was not quite like the ones some of us would remember from the late 1990s which were organized by the Zimbabwe Congress of Trade Unions (ZCTU). This one, though heavily involving the teachers unions and the civil service associations, did not require mobilization as of old. There were few public meetings, fewer physical paraphernalia such as fliers to be distributed on the streets and no ‘boots on the ground’ door to door campaigns.

A key question that then emerges is so what could have motivated so many to act in unison at the same time, even though for various reasons. The easy answer for unionists would be that it was the issue of unpaid salaries for teachers and civil servants that made a majority of urban citizens stay at home. Political, social media and civil society activists would argue it was the intention to send a clear political message to the current government that citizens are tired of its incompetence amidst non-ending corruption scandals. Others, still would argue that it was the fear of the unknown consequences of going to work that ensured the stay at home and wait it out strategy.

In all of these explanations there shall also be claims made by the various activists, especially the teachers unions and the civil service associations, the activists/social media activists (#ThisFlag, #Tajamuka, Occupy Africa Unity Square) of having provided the determinative leadership of the stay away. Or at least as to having been the most listened to by the majority of citizens that chose to stay at home. For this, there is no one final answer, and it will always be contested terrain until the next planned, unplanned, coincidental mass action. The contests however do not take away the full political importance of the stay away.

But there is the one actor that, until the day of the mass action itself, was not viewed as a standalone factor. This player is the internet and its offshoot social media platforms. Especially the Whatsapp application which was used by all actors and players in their calls for strikes, protests and stay-aways. Not only because it was briefly shut down (neither government nor the mobile phone companies have taken the blame), but also because the very act of shutting it down, for the same period, became the major talking point on other platforms such as twitter and facebook. Not that the strike itself was not important. But the medium also became the message.

It was knowing about the strike via our mobile phones that became even more important. The medium/technology we were using to communicate became not only key but also fundamental to how we perceived or understood not only the strike/stay away but also our roles in it. All of this based on the fact of the speed with which the medium i.e the internet/Whatsapp/ mobile telephony allowed us to relay or receive messages, and how close, personal and beyond government control it is. We determined what we wanted to read and what we wanted to believe on this social media platform as individuals, as groups and by default as people with access to this one aspect of the internet.

This to the extent that even where in some cases exaggerated/dishonest stories were received or relayed on the platform, a good number of Zimbabweans chose, quite literally, to believe these stories in aid of what they wanted the strike either to become, or to continue as. And mainly in either video or pictorial format especially when posting about something burning or equally dramatic.

More significantly was the fact that in the build-up to what was initially a civil servants planned strike, the various incidences that occurred at the Beitbridge border post, at Africa Unity Square, at Rainbow Towers Hotel, in Chitungwiza had all been varyingly posted on social media. On Whatsapp they were posted and re-posted to various ‘groups’ thus extending the reach of the information/knowledge about sometimes unrelated events/actions. In the process, Whatsapp replaced what would have been routine/ regular mobilization strategies of bigger meetings and mainstream media campaign strategies. The Whatsapp groups became the small town meetings and gathering points. And here I mean all sorts of groups, from those related to churches, families, sports, social clubs, informal traders, formal companies and human rights/civil society organizations.

The particular significance of this is that the mobilization strategies of old are not always going to be as effective. And that the existence of social media, where it is an integral part of combining evidently direct causes such as those relating to late payment of salaries, will always find credence particularly because of the speed at which information can be shared and above all, owned and believed in order to be minimally acted upon by millions of citizens at a time. That on its own, is a potential revolution waiting to happen. Hence someone wanted it shut down. Even if temporarily.