Kenya’s Crisis of Memory and Imagination 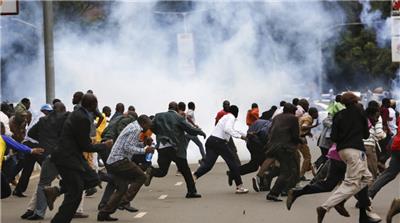 Kenya today finds itself in the throes of a crisis. In the run up to next year’s scheduled general election, weekly opposition protests and the subsequent brutal crackdown, have deeply polarized the country and left at least three people dead and many others, including police officers, wounded. Though now suspended, a threat to restart the demonstrations if dialogue doesn’t happen still hangs in the air. But beyond the rhetoric, the teargas and the scenes of bloody confrontation, this is above all a crisis of memory and imagination.

We have been here before. Almost every election in the multiparty era has been preceded by protests and demands for reform. The contestation has mainly been about two questions: the rules governing elections; and who sets and administers them. The latter question is the immediate spark for the current weekly demonstrations with demands for the reconstitution of the Independent Electoral and Boundaries Commission. However, in the background, and sadly barely mentioned, lurks the even more critical issue of wider reforms to the electoral system.

Nearly two decades ago, as the country prepared for another election, near identical scenes of protest over the composition of the then Electoral Commission of Kenya elicited a vicious response from the Nyayo government led to the deaths of 13 protesters on Saba Saba day in 1997 and the formation of the Inter Parties Parliamentary Group which negotiated a raft of reforms. These allowed the country to proceed to the polls later that year.

In our collective memory, the IPPG process was as a seminal moment during which the autocratic President Daniel Arap Moi was forced to accede to the people’s demand for change. George Kegoro, in March described it as “an elite platform that Kenyan political actors and civil society crafted in 1997 to save the country from the disaster that might have resulted from a threatened opposition boycott of the General Election of that year”. There are many parallels with today’s impasse including the threat by the opposition Coalition for Reforms and Democracy to boycott the 2017 elections if the IEBC is not replaced. Given that, many are citing the IPPG as a model for resolution. “It is time for another IPPG-like moment in Kenya,” as Mr Kegoro presciently wrote. The insistence by the governing Jubilee coalition and its supporters that Parliament is the appropriate forum for resolving the dispute can also be seen in this light.

However, this telling ignores a few inconvenient facts of history. The IPPG was not crafted by the opposition and civil society to save Kenya. On the contrary, it was, as Rok Ajulu described in the New England Journal of Public Policy, “a KANU platform … designed to blunt the impact of the reform agenda of the opposition and its allies in the National Convention Executive Council [the civil society coalition that had spearheaded demands for change].” The NCEC correctly saw the IPPG as a tool “to cool the fire raised by … the demands of the country for electoral reform, and in the process to legitimise the Moi re-election machine,” and opposed it.

While the IPPG achieved some reforms, including allowing the opposition a role in appointing ECK commissioners, it was ultimately betrayed and many of the negotiated reforms were not enacted into law following the early dissolution of Parliament. Moi’s successor as President, Mwai Kibaki, would a decade later rubbish the very agreement he had had a hand in negotiating as a non-binding “gentleman’s agreement” and ignore it when appointing ECK commissioners, fatally undermining the ECK’s credibility and setting the country on the path to the 2008 post-election crisis.

Many of the arguments we hear from government types today in favour of a Parliamentary process are a rehash of Moi’s justification for using Parliament, the “legitimate representative of the people” as a forum to exclude them. They highlight the question at the heart of the push for constitutional transformation which, despite the 2010 constitution, we have failed to resolve: Is reform to be a people-driven or state-driven process?

This is evident in the continuing delegitimization of the street as a proper avenue for political participation and the idea that state institutions are the only acceptable forums for political negotiations. We see it when Boniface Mwangi’s peaceful demonstrations are violently dispersed and hear it when the government attempts to arrogate to itself the power to determine where and when protests can happen.

It is this collective failure to imagine alternative spaces where national questions can be debated and resolved by inclusive collections of wananchi, and not just by politicians or public officials, that is at the root of many of the state’s current legitimacy problems. Sadly, our political processes continue to be more concerned with solving the problems of politicians rather than those of the people.

Going forward, we must insist that any talks on fixing the electoral system not be sequestered in Parliament or participant limited to politicians. This is Kenya’s problem, not Raila Odinga’s or Uhuru Kenyatta’s. We must demand an inclusive national dialogue involving a wide array of stakeholders, including organized civil society and academics. These groups were major drivers for the 1997 “No Reforms, No Election” movement that was locked out of Moi’s IPPG talks. It is time they helped us finish what they started.