Home » Democracy » Magufuli and The Politics Of Information Sharing

Magufuli and The Politics Of Information Sharing 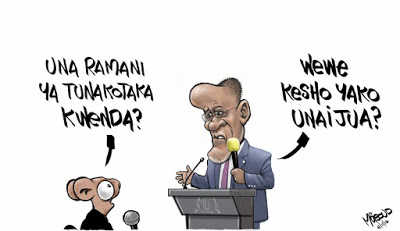 On November 20, 2016 the President of Tanzania, Dr. John Magufuli, sacked the chair of the Tanzania Revenue Authority (TRA) Board, Bernard Mchomvu. According to The Citizen, the “sacking was announced through a State House statement, which, however, did not specify the reasons for his removal.” The ‘rumor mills’ in a city that was once dubbed ‘Rumorvsille’ took over.

Five days later, Daily News reported that the President revealed that Tsh 26 Billion were “allocated for TRA’s expenditure but the board approved a decision to deposit the funds in fixed accounts in three different commercial banks.” So, he directed that the money should be returned, fired the chair and dissolved the Board. Informative.

“When the President gives out reasons on matters like these on [the] dissolution of TRA board openly”, affirms a comment on the Daily News report, “it therefore puts to rest any speculations and unnecessary rumours!” And that, it concludes, “is what should always be whenever an issue elicits much interests in our streets.”

However, for those who tend to argue that there is more than one side to any story, the presidential revelation is necessary but not sufficient. They want to know when did this Board meet. Who was there? Was their decision tied in any way with the actions of TRA officials, who were fired last year and the one who was transferred earlier this year after a computer was reported as stolen? More significantly, what ‘professional rationale’ informed their decision?

Well, “and four other members appointed by the Minister with professional knowledge and experience in finance, commerce, economics or law from among institutions of financial, commercial, legal or economic nature having no vested interests in the Authority.” Hence the question: If all of these were there, what financial ‘professionalism’ and fiduciary ‘prudence’ informed them?

Curiously, The Governor of BOT, Professor Benno Ndulu, has just been (mis)quoted in Mwananchi as saying that there is nothing (legally) ‘wrong’ with putting money in a fixed deposit account. One cannot help but wonder whether he was also part and parcel of TRA’s Board meeting that approved the depositing of the Tsh 26 Billion. What is more puzzling is whether, ‘technically speaking’, the dissolution of the Board has to do with the chair and “four other members”given that the other senior government officials have not been fired from their other posts. This query is particularly relevant given that the second schedule of the TRA Act stipulates that “five members shall form a quorum for a meeting of the Board.”

Such questions brings us back to where we began. If public information sharing is anchored on informing the citizenry about important matters in our polity as aptly provided in Article 18 of the Constitution of the United Republic of Tanzania, why should it remain fragmented? Is it because some issues are ‘too sensitive’ and hence disclosing them is ‘a matter of national security’? How does one decide what information is for ‘public consumption’? Does the government’s communication strategy include a set of clear criteria for sharing information that is for ‘public interest’ in a timely way?

Or do we simply have to rely on the good will and discretion of the personality in the presidency? Must access to public information depend on whenever he/she feels like revealing the ‘truth’, be it in the middle of a celebratory speech on a graduation ceremony or anywhere else? Is it a matter of spontaneity or constitutionality?

Interestingly, yesterday we had a chance to listen, ‘live’, to a phone call between President Magufuli and Dar es Salaam’s Regional Commissioner, Paul Makonda. Populist rhetorics and stunts aside, this public event underscored the need for ‘clear communication’. When they were closing their conversation, the President said:

“Kwa sababu saa zingine, ufafanuzi huu ungekuwa umeshatolewa mapema, wananchi wasingekuwa na sababu ya kuja kuuliza haya maswali” [Because, alternatively, if such clarifications were presented earlier own, citizens would not had any reasons to come and ask these questions]

That is exactly what we need from the Presidency: Clarity.