Magufuli’s Three Years in Office: Confusion as a Strategy? 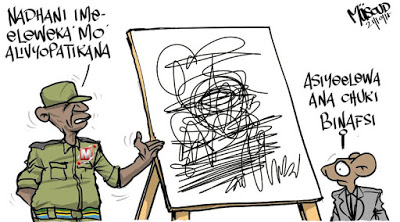 If you want to sum up President John Magufuli’s three years in office, then something that happened last week can give you a picture. The controversial Dar es Salaam Regional Commissioner, Paul Makonda, announced war on the LGBT community a week ago. Three days later, the Ministry of Foreign Affairs issued a statement saying that the RC’s war was personal and the government is not supporting it.

The statement from the ministry was short and a bit apologetic. It came after the government received a lot of negative publicity from the LGBT community around the world. Reading between the lines, it was clear that the government succumbed to international pressure. But, no action has been taken to the person who caused the furor in the first place –Makonda, who has long been known to be President Magufuli’s blue-eyed boy.

The end is thus; locally, the government enjoys the support of those who think the LGBT community is a curse and internationally, the government has distanced itself from taking part in hunting people who are involved in sodomy and same-sex relationships. This is confusing. But, to some extent, confusion has always been the center of Magufuli’s regime. Methinks, the President is a master of confusion.

Take an example of the times when he was the Minister of Works. He once visited the Hai constituency and praised Freeman Mbowe as the model politician. He said he had no problem working with people like the Chadema Chairman.

In power, Magufuli has acted in the complete opposite. If there is one political party that has suffered a lot during this presidency, Chadema is comfortably the candidate. As I write this piece, hundreds of its supporters are in courts facing countless allegations.

All top national leaders of Chadema are facing court cases; including Mbowe himself who was hailed as the model opposition politician in the past by Magufuli. In Magufuli’s first days in the office, Mbowe was quoted as saying the president was actually implementing what they were preaching in the last ten years.

The romance is gone. Confusion reigns.

Another good example is the mining agenda. The government has embarked on a mission to make sure that Tanzanians are benefiting from mineral riches bestowed on our land by the creator.

In public, Magufuli has lamented that Tanzania received a raw deal in the past because some people were not careful. When one newspaper mentioned former presidents as some of those people who gave us the raw deal; the government was furious and the paper was banned.

The question still hangs in the air; if former presidents are not responsible for what happened in the past, then who are the people that the president is always lamenting that have caused us all the loss in minerals revenues?

The President is also claiming that his presidency does not care about people’s political affiliations. It is the government of all. But, talk to any opposition politician, and he (she) will tell you that the democratic spaces in the country have been shrinking and their situation is maybe the worst for the last 13 years.

Women activists will also tell you that the issue of gender balance is low on this government. This government, suddenly, does not seem to be the government of all.

In the international arena, the story is still the same. Tanzania is still claiming to be the friend of Palestine, while we have now established a proper relationship with Israel. We were never Israel enemies but we always sided with Palestine. The current state is, at most, confusing.

This is like saying that during the apartheid South Africa, we could friends to both the ANC and the Boers’ regime. This is unthinkable but practical in Tanzania.

To me, this is nothing but confusion.

I understand that confusion is one of the most potent political strategies. I am not one who believes that the confusion experienced under this regime is coincidental. It is not. It is a strategy in itself.