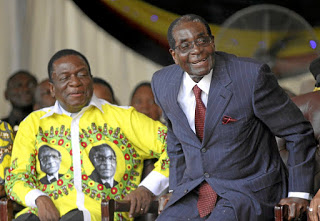 Zimbabwe’s quest for a new path under the auspices of the new dispensation and reengagement by Mnangagwa has vapoured into thin air faster than anyone could have imagined as the country is back again under the international spotlight. The November 2017 Euphoria has fast fizzled to Armageddonian despair.

Mnangagwa’s reckless and divisive utterances during the Mwenezi rally held over the weekend, where he openly issued threats targeted at human rights lawyers and doctors should leave any peace loving and citizens in general with opposing views worried.  Mnagagwa said:

It raises the fears that Zimbabwe has quickly slided back into that era of gross human rights abuses, disappearance of people whose views are seen as politically incorrect, illegal policing of fellow citizens by violent party activists instead, one party state kind of situation, forced migration and displacement of opposition leaders and supporters.

After a spirited and yet deceitful campaign portraying himself as a reformist, Mnangagwa had indeed managed to deceive Zimbabweans and the international community. But like the proverbial leopard that doesn’t change its spots, Mnangagwa has exposed his true colours.

Since the November military coup in 2017,  Mnangagwa has been trying so hard to portray the ‘good boy’ image,  that of a reformer who is determined to drive Zimbabwe to the promised land of milk and honey. That approach was beginning to bear fruits with appearances at Davos and at least  ‘favourable’ coverage from some once hostile international media outlets.

Mugabe’s  37 years iron fist rule reduced a once beautiful nation into a pariah state  with alarming  human rights abuses, bad governance, a disappearance of the rule of law and rampant corruption by political elites.

From where we stand, today,  Zimbabwe finds herself, once again in a precarious situation with Mnangagwa’s rule under serious scrutiny, both locally and internationally as he seems to have failed to resist dipping from book of rules he and other leaders co-authored with Mugabe.  The recent events in the Southern African country paint  a gloomy picture, dashing hopes for a new dispensation and a different path that departs from Mugabe’s pariah days.

I argue that Mnangagwa missed, rather a number of ‘golden opportunities’ to redeem himself from his horrendous past in Zimbabwe’s darkest history. The man simply failed the test, here is why?

Firstly, after removing Mugabe through a military coup, Mnangagwa had an opportunity of emerging as a responsible leader ,’ to unite a divided underachieving impoverished nation that had been polarised by hate politics, violence and intolerance by Mugabe. In my opinion, Mnangagwa’s first port of call should have been to call for an all-inclusive national dialogue that would initiate  discussions on the country’s polarised political environment, the economy, national peace and reconciliation programme, and re-engagements efforts after the pariah years of Mugabe’s misrule. The national dialogue process’ thrust was to  discuss and lay out transitional mechanisms whose sole purpose was to deal with electoral reforms with particular time-frames leading to a national election.

Secondly,  just a day after the election was conducted and before the release of results of a generally peaceful election were announced Mnangagwa, squandered another opportunity by unleashing soldiers on the streets of Harare resulting in the deaths of 6 innocent civilians. Even with a simmering dispute around the results, most observer missions, particularly the African brothers were preparing to turn a blind eye on the chicanery around the results and endorse the election. However as the African brothers were still chuckling behind the scenes the demon in him (Mnangagwa) suddenly flared up and he deployed the army to kill innocent civilians who were protesting on the streets of Harare.  With a likely endorsement from his erstwhile African brothers, there was really no need for Mnangagwa to deploy the army as this exposed him and put his leadership under the spotlight. The 1stof August protest should have been dealt with differently. I argued during that time,  Mnangagwa had literally gotten away with murder (rigging) had he not unleashed trigger happy  soldiers who spoiled the party for him by killing civilians.

As the shootings happened, Mnangagwa did not come out in the open to take responsibility that he had indeed deployed the army leaving many to speculate that it was his deputy Chiwenga. It did not end there, Mnangagwa proceeded to appoint a commission of inquiry led by former South African president, Kgalema Mothlante. I argue that there was insincerity around the setting up of the commission.  If the truth be told, the setting up of the commission was meant to be a Public Relations (PR) exercise to ‘please’ the international community, in particular the British and Westerners.

Equally, the commission’s terms of reference were quite clear that it appeared a witch hunting exercise to blame the MDC Alliance for having caused the chaos. This then brings me to my third point, of yet another missed opportunity by Mnangagwa, in that in the first instance he should have “consulted” all the stakeholders  on the composition and terms of reference for the commission. Rather than the backlash he got after appointing some individuals with questionable backgrounds to be part of the commission.

Consequently,  despite the controversies around the composition of the commissioners, the commission’s recommendations also presented an (fourth) opportunity around implementation. In hindsight the fact that the recommendations are still to be implemented and there seems to be no desire to do so. This, raises fears that it was just a window dressing exercise and this has come out clearly from his utterances in Mwenezi.

Despite, Mnangagwa’s outright denial that he deployed soldiers on the 1stof August 2018 and blaming the opposition for causing the violence that happened during the shut-down in January 2019, his shocking utterances in Mwenezi and his interview on France 24have exposed him as the architect of the whole saga.  Mnangagwa boasted: “We should be on the lookout as our enemies are not resting, but ensure our eyes are always wide open. We will crush our enemies, and they are being crushed.” It is now quite evident, beyond any figment of doubt  that he was well aware of the goings on and all this is part of a wider crackdown on the main opposition, the MDC Alliance and the civil society. To sum it all, the unfolding events in Zimbabwe show that  ZANU PF is in now back to its default mode of violence.

Essentially, the utterances by Mnangagwa in Mwenezi are a declaration that, firstly ZANU PF is politicking about the new dispensation, secondly they are not prepared for any reforms before the next election,  thirdly there is going to be more clampdown on activists, with raids on CSOs,  fourthly rural areas are once again declared no go areas for the main opposition and civil society. In light of these, I also wish to highlight that the proposed meeting by the First Lady Auxillia Mnangagwa to meet with the wives of traditional leaders, is worrisome as it might be part of a broader strategy by ZANU PF  to close the rural areas in preparation for the next election in 2023.

Therefore, as this is happening, Zimbabweans should not look for  any miracle in the revival of the economy. The  structural economic implications of the Mnangagwa administration are dire; there is no hope. The levels of poverty in Zimbabwe will worsen, income has been eroded, inflation is galloping out of control,   industrial productivity is slowing down (Miners scaling down), prices are off into the sky, investors are giving Zimbabwe a wide berth and yet the party state has increased extractive taxes. Notwithstanding Zimbabwe’s political elites getting ‘solidarity’ from the region the contemporary complex concoction of widening factional fights in the political elite ranks; the widespread political polarity and the on setting economic meltdown will slowly but surely blow Zimbabwe into another vortex of poverty, disease and political conflict.

In conclusion, I argue that by inciting violence, the outcomes so far cement Mnangagwa’s continued trajectory on  Mugabe’s type of politics of a vampire state. The vampire state entails the Mugabe style of politics: of criminalising some fellow citizens; degrees in violence; plunder of national assets; anti-west rhetoric; nationalistic-military authoritarianism; endless foreign trips to despotic nations, like Russia, Belarus and China in search of elusive alternative capital; and finally living in opulence and extravagancy whilst the nation wallows in disasters and poverty. In essence, Mnangagwa is aligning  his regime with the eastern bloc mainly to achieve, one key objective; to seek sanctuary from the likely censure from the West, given his now resort to dictatorship, as warned by his spokesperson, George Charamba, that the January 2019 military crackdown was a “ foretaste of things to come”. It’s back to Armageddon!