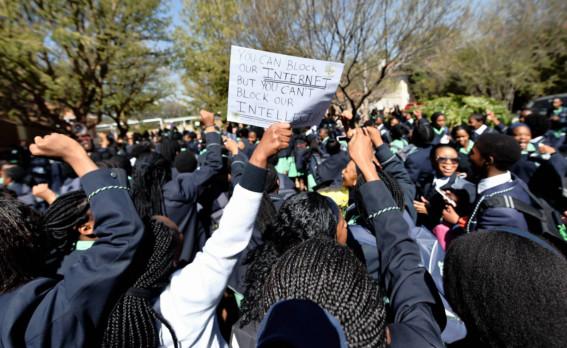 On June 12, 2017 two voice clips in which a 17-year old, Grade 11 learner from Pietermaritzburg Girls High School refers to her Black classmates as ‘k****rs’ were uploaded on social media. In the clips, she’s heard using the racial slur because her name had been pronounced and spelled incorrectly by another learner.

According to reports, some staff and learners claimed that the girl was “stressed” due to exam season. During an assembly called to address the matter students were told to “’stop whining’ because no-one is going to care in five years’ time…” While the learner has since been suspended, following an online uproar, it can’t be ignored that the initial reaction of the school tacitly endorsed racism. They failed to articulate a clear anti-racist stance, also not taking corrective action swiftly enough. By reacting the way they did, they effectively let white children know that their racism can be excused, also shifting the burden of responsibility to Black learners by suggesting that their complaints are the problem.

Black children should be allowed to be children and not have to fight to assert their humanity in a space meant to both educate and protect them. They should not be burdened with the responsibility of adults who fail them and those who refuse to see their humanity.

The incident echoes of Pretoria Girls High School, where last year Black learners protested against not being allowed to wear their natural hair; being accused of plotting when walking in groups and being told they are making “funny sounds” when talking in our native languages.

After this protest, more reports emerged from even more ‘Model C’ schools of how Black learners at different schools across the country have been subjected to having swimming caps put over their heads to determine whether their hair is “neat”; receiving demerits for speaking in our native languages and being told their natural hair is “untidy”. This is a result of both the abuse of process in the form of code of conducts to discriminate and exclude, as well as the arbitrary implementation of these codes. It’s clear that our education system, like many other South African systems, continues to suffer from colonial, apartheid hangovers perpetuated by those who want to continue to use our schools as a means of maintaining white racial superiority.

While some Education MECs responded swiftly to instances of allegations, as we have been saying at amandla.mobi, dealing with it one school at a time in an unsustainable way of addressing what is clearly an institutional problem. Also, it undermines the transformative role schools can play in changing a fundamentally anti-Black society.

In her reflections on education, prominent Black feminist Bell Hooks, refers to education as a “practice of freedom” because she understands that the impact of the classroom can and should go beyond teaching required curricula. She refers to this as “talking about that quality of education that is enabling and empowering and that allows us to grow”, working against systems that reinforce domination and oppression.

This is particularly important in a South African context in which Black people make up the demographic majority, yet remain in many ways the ‘outliers’ of our society and insttutions.  This is particularly visible in these schools, which still view white children as the default. This is reflected in the rules about hair and content that is consumed through representations of whiteness and the inability to effectively respond to the concerns of Black learners and protect them equally.

To really challenge the things that reinforce racial superiority and re-educate those who perpetuate it, also affirming those who are on the receiving end, government needs to take the lead.

Education MECs across provinces should review schools codes of conducts and ensure that they are neither discriminatory in any way nor arbitrarily implemented. These should also adhere to the guidelines set out in the schools act and made with wider consultation of stakeholders, beyond School Governing Bodies (SGBs) and must include learners themselves. They should also be deliberate about recognising and undoing the inherent tendency to marginalise Black children and have them conform to ways of being that aren’t our own. Over and above this, the untransformed management structures of Model C schools needs to be addressed and all staff trained on how to respond to racism in its various manifestations, with the understanding that they themselves, along with students and parents of students are not immune to what is a societal problem.

While there is a lot to be done to ensure much more equitable access and experience of education for Black children in the country, these are important steps that can contribute towards that, at least for those in these ‘Model C’ schools.

* This is a slightly edited version of a post originally published by Sunday Independent.

Featured image: Pupils of Pretoria High School for Girls picket inside the school premises while Gauteng MEC for Education, Panyaza Lesufi, met with the school
management following allegations of racism at the school. Photo: Phill Magakoe