Home » Democracy » One Year After Mugabe: A Revolution Still not Televised

One Year After Mugabe: A Revolution Still not Televised 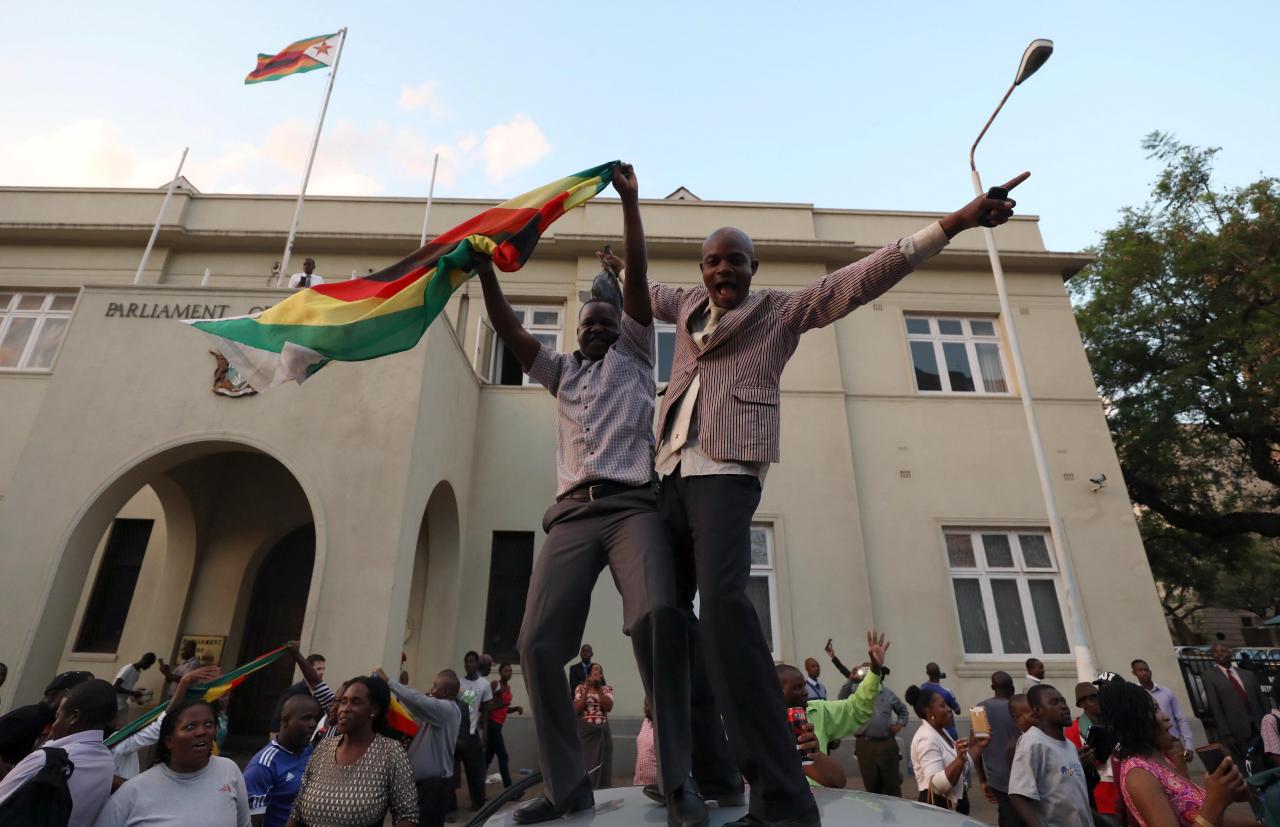 On 15 November 2017, Robert Mugabe, Zimbabwe’s longest serving ruler was confined to his private residence in the affluent suburb of Borrowdale in Harare, Zimbabwe.  This, while armed soldiers took control of the Zimbabwe Broadcasting Corporation’s (ZBC) headquarters major stations and patrolled the streets of the capital city.

In what was self-evidently a ‘coup d’etat‘ but euphemistically referred to as a ‘military assisted transition’, the country had entered into a period of potential serious political instability.  All instigated by succession and factional battles in the ruling Zanu Pf party at the end of which an emboldened Mnangagwa faction and its military actors took a risk that Mugabe (and his wife) never thought possible.  Also one that SADC probably thought would never happen.  At least not in Zimbabwe.

By 18 November 2017 the military and ruling party members were exhorting Zimbabweans to march on the streets.  And by 19-20 November 2017, march/gather in Harare, they did.

The ruling Zanu Pf party, for the first time without Mugabe readily available to lead it, took advantage of the popular support and called for a central committee meeting that resolved to remove him from power.  And where he would refuse they also undertook to use the constitutional option of an unprecedented Parliamentary impeachment.

In the meantime, the military was negotiating with its would be commander in chief (at least legally)  to resign.  Mugabe refused.

As it turns out, it was only when Parliament had started impeachment proceedings at a local hotel that Mugabe’s resignation letter arrived.  What were rather contrived and real celebration were seen occurring on the streets of Harare with the military’s permission.

But perhaps more significantly in what remained of the ruling party as seen when Mnangagwa became president thereafter. Not only via his party but also a very public swearing in ceremony attended not only by the then chair of SADC but more importantly by the main opposition leader Morgan Tsvangirai.

Less than six months on from these events those behind the removal of Mugabe’s ouster managed to perform another shocking political feat.  They won a general election even as the opposition decried the results as not being truly reflective of the will of the people. Opposition marches were held and tragically lives were lost (the subject of former South Africa president Kgalema Montlante’s Commission of Inquiry as appointed by Mnangagwa.)

The international observers that were present noted electoral discrepancies but the most important ones fell short of rejecting the electoral outcome.  The constitutional court’s judgement finalized the matter with a unanimous ruling in favour of Mnangagwa thus paving the way for him to serve as president for the next five years.

Many Zimbabweans, especially those sympathetic to the opposition or with an intense dislike of the ruling party have refused to accept this political reality.  Those of the other factions of the ruling party either known as the ‘Generation 40’ (Mugabe)  or ‘weevil’ (former Vice President Mujuru) factions have remained not only bitter on social media but also actively supporting anyone who opposes the current ruling establishment.

Whatever their feelings, hindsight now favours those who are in power.  The future not so much so.  This is because the ruling Zanu Pf establishment owes so much to so many global players.  The latter being those that are close to private capital in its local and global economic and political parameters.

For local and relatively powerless ordinary Zimbabweans who never really had a direct influence on not only the coup-not- a-coup events of November 2017 but the complicated dynamics of the 2018 general election, there’s a general tragedy of expectations.

Assumptions that the departure of Mugabe would lead to some sort of better change, ill-defined as it was when people marched the streets in support of the ‘coup-de-tat’ or the July 2018 elections, have come to naught.  What has emerged and broadly spoken for, is a sense of not only de-ja-vu but more significantly a return to an ephemeral national consciousness that waits for elite driven political events to occur first. All before intentions and questions are asked about those that would seek political power are addressed or answered.

There are however four specific realities that Zimbabwe is faced with going forward.

The first being that the ruling Zanu Pf party is in power, for the umpteenth time and  for another politically controversial five years. And in its exercise of power, its primary target is performance legitimacy.  Not necessarily with the people of Zimbabwe but more significantly with private global capital.  All with the aim of being seen to return to international legitimacy via the West, East and the Global South.

Secondly, the fact that there is a loose coalition of the opposition which is never going to proffer an ideological let alone issue based alternative to the ruling establishment leaves a lot to ponder.

Save for a shallow populism, again seeking endorsement, like Zanu Pf, from global capital and its political backers in the global north. All in the vainglorious hope that time (age), economic collapse and a potentially distrusting global capital will spur them on to an electoral victory in the next elections in 2023, the opposition remains hapless. And all mixed with what can only be described as ephemeral religious political fervor akin to ‘waiting for Godot’, to quote Samuel Beckett.

Thirdly and as a direct result of the above immediately mentioned two factors, is the reality that the Mnangagwa government has no intention of being people centered let alone behave in any way that would be harmful to business (private capital).  As long as the latter forgets (and possibly forgives) their previous transgressions when they were under the tutelage of a radically nationalist but unfocused Mugabe.  Zanu Pf is intent on ensuring it courts back big business.  Therefore, its understanding of what it calls a new dispensation is effectively neo-liberal.

So when people argue that this is in reality not a new dispensation, they misconstrue the new to be more political than it is economic. Or they misread the assumption of the new residing in the political as opposed to the pro-business economic policies that will be announced next week in the projected national budget for 2019.  ‘Liberal politics’ will be benevolently permitted but it is ‘liberal economics’ (free market) that will be the supreme priority.

Being ‘open for business’ will not translate to being open to organic challenges for state power. And with the support of private global capital and its local offshoots, so long they both get want they want. That is, profit or as politely put, ‘returns on investment’. Fourthly (and finally) is the question that emerges from a ‘between a rock and a hard place’.  Is there an alternative? There always is. Given the internal contradictions of neoliberalism and the emergence of a progressive global and local left.  With or without Zimbabwe’s faltered, faulty not so  new dispensation. If it ever was one. But alternatives will always remain in vogue. As Gill Scott Heron once sang, ‘the revolution will not be televised.