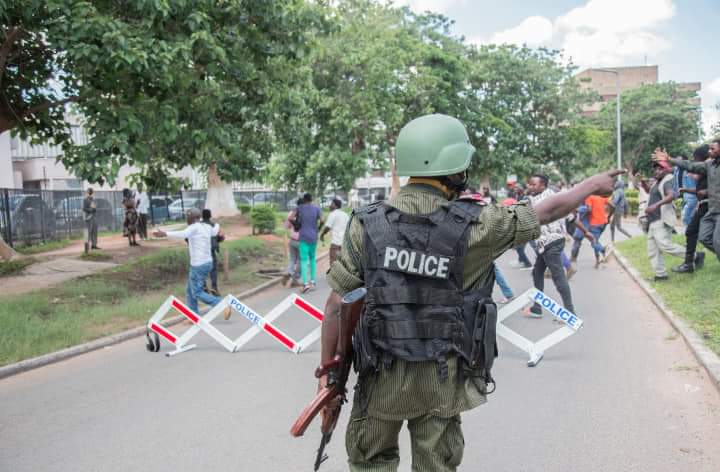 THE environment was tense and politically charged as Zambia’s capital, Lusaka came to a standstill on Wednesday 23rd December 2020. Gunshots were loud and teargas smoke filled the air as police struggled to control opposition political party supporters on the streets. Two men Nsama Nsama Chipyoka a public prosecutor and Joseph Kaunda an opposition party supporter died of gunshot wounds during the fracas.  Inspector-General of Police Kakoma Kanganja confirmed the deaths but said they occurred in “unknown circumstances” while officers tried to break up the gathering.

President Edgar Lungu only responded to the “murders” over 24 hours after they happened by describing the killer as an assailant, a description that purports to exonerate the police from the deaths which would qualify for extra-judicial killings. This development adds a further stain on Zambia’s deteriorating human rights record.

President Lungu has directed the Inspector General to use every resource available to fully investigate these murders as quickly as possible demanding to have a report by Monday, 28th December 2020. He described the deaths as avoidable and unnecessary accusing Zambians of abandoning the country’s values and now believing that politics or politicking must be the country’s daily bread.

The Human Rights Commission (HRC/Commission) called upon the government to immediately establish an inquest to establish the identity of individuals responsible for shooting to death of the two.

The Law Association of Zambia observed that it has become fashionable for the police to use live ammunition and kill unarmed and innocent citizens in the process citing a recent incident of February 13, 2020, were a Grade 9 Pupil was shot dead by police who were targeting protesters. They lamented that the practices by the police fall below internationally accepted standards for policing and crowd control.

A consortium of civil society groups also condemned the killings and appealed to the police to exercise maximum restraint and build a peaceful culture ahead of the 2021 polls and avoid deploying exercise war style machinery and use of excessive force as witnessed in this case.

Preliminary investigations by the Human Rights Commission had established that Mr.  Nsama, a State Prosecutor working for the National Prosecution Authority (NPA) and Joseph Kaunda, a Kafue based UPND sympathiser were shot dead, about 10 metres from each other near the NPA offices.

The Commission expressed shock at the indiscriminate use of live ammunition by the police in an area surrounded by public offices such as Cabinet Office, the Ministry of Justice, the British High Commission, and others including private places such as the Restaurant where the majority of workers around go to eat from.

The Commission said the unnecessary display of warfare tactics and use of excessive force by the police in the recent past has been unprecedented.

“The killing of Mr Nsama is a classic example of the unreasonableness, unjustifiable, unnecessary, reckless and arbitrary use of excessive force by the Zambia Police Service. As a result, lives continue being lost through extra-judicial killings, which is the unlawful killing of an individual by the state.

Many have been widowed and orphaned while relatives, friends and colleagues have lost their beloved ones at the hands of state agents, who have continued to go scot-free, thereby creating a vicious cycle of impunity. The socio-economic deprivation, the emotional pain and the political tension caused by such gross violation of the right to life are unbearable and the Government has an inescapable obligation to stop that.” Commission spokesperson Mwelwa Muleya said in a statement.

The Commission calls upon the Government to create a conducive governance environment anchored on respect for the rule of law, constitutionalism and human rights while maintaining law and order in order to protect, and not to eliminate, lives.

The entire fracas was triggered by police callout on the United Party for National Development, leader Hakainde Hichilema to face police interrogation related to the purchase of a farm about 15 years ago. The opposition leader denied wrongdoing, and described the questioning through his spokesman, Anthony Bwalya as “an attack on democracy.”

Political tensions are rising in Zambia ahead of elections set for August 2021 as the country became the first in Africa to default on debt payments during the pandemic and is seeking a loan from the International Monetary Fund. Hichilema was arrested and charged with treason in 2017, months after an election that Zambian President Edgar Lungu narrowly won. He spent four months in prison.

The Minister of Home Affairs Hon Stephen Kampyongo had a day earlier issued a strong warning to members and sympathisers of Zambia’s leading opposition figure Hakainde Hichilema to stay away from the streets as he attends to the police call out to assist with investigations into an unspecified matter.

This warning was echoed by Lusaka Province Minister Bowman Lusambo who is no stranger to controversy who added that the “police know what to do” should supporters escort their leader as he was expecting only one suspect to show up at the police service headquarters in Lusaka.