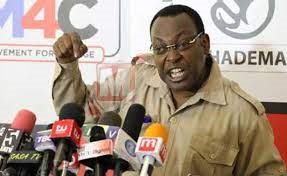 The chairman of Tanzania’s Chama Cha Demokrasia na Maendeleo (Chadema), the main opposition party, Freeman Mbowe has been charged with terrorism. Mr. Mbowe was arrested on the 21st of July 2021 was secretly detained at the Oysterbay police station for four days.

He was produced in court on Monday (26th July 2021) to face terrorism-related charges after lawyers, opposition leaders, and human rights organizations piled pressure on the government demanding to know his whereabouts.

After having been under police custody for over 100 hours, he was secretly arraigned in court without legal representation.

Reading the charge sheet, Senior State Attorney, Ester Martin assisted by Tulimanywa Majigo, before the Chief Resident Magistrate, Thomas Simba, said that defendant Mbowe was brought before the court to be joined by three other defendants facing terrorism charges. The other three were brought to the same court in 2020.

Mbowe is alleged to have conspired to commit terrorist offenses between May and August 2020 at the Aishi Hotel in Kilimanjaro Region including burning fuel stations and public rallies using explosives.

In the second offense, Mbowe is accused of providing funds for financing terrorism in violation of the Terrorism Offenses Act and the case has been adjourned until August 5, 2021.

The state’s attorney has told the court that the investigation into the case has been completed, ready for submission to the High Court of Tanzania.

Mbowe’s arrest, detention, and prosecution evoke memories of arbitrary arrests and detention of opposition politicians and journalists during former president John Magufuli’s six-year rule. Mbowe, Zitto Kabwe, and Tundu Lissu were constantly harassed and arrested during his presidency with the latter surviving an assassination attempt in 2017 forcing him to go into exile abroad.

In 2020, Lissu returned to face-off with Magufuli in the presidential poll as the Chadema candidate. Magufuli won the vote amid claims of rigging by opposition politicians. Mr. Magufuli died in March 2021 after a short illness. His then deputy Samia Suluhu Hassan took over the presidency for the remainder of his term according to the Tanzanian constitution.

This article was originally produced for Sauti Kubwa. Additional reporting by, Yustino Ndomba and Daniel Ominde.