Home » Democracy » The Zimbabwe Peoples Charter and the democratic struggle

The Zimbabwe Peoples Charter and the democratic struggle 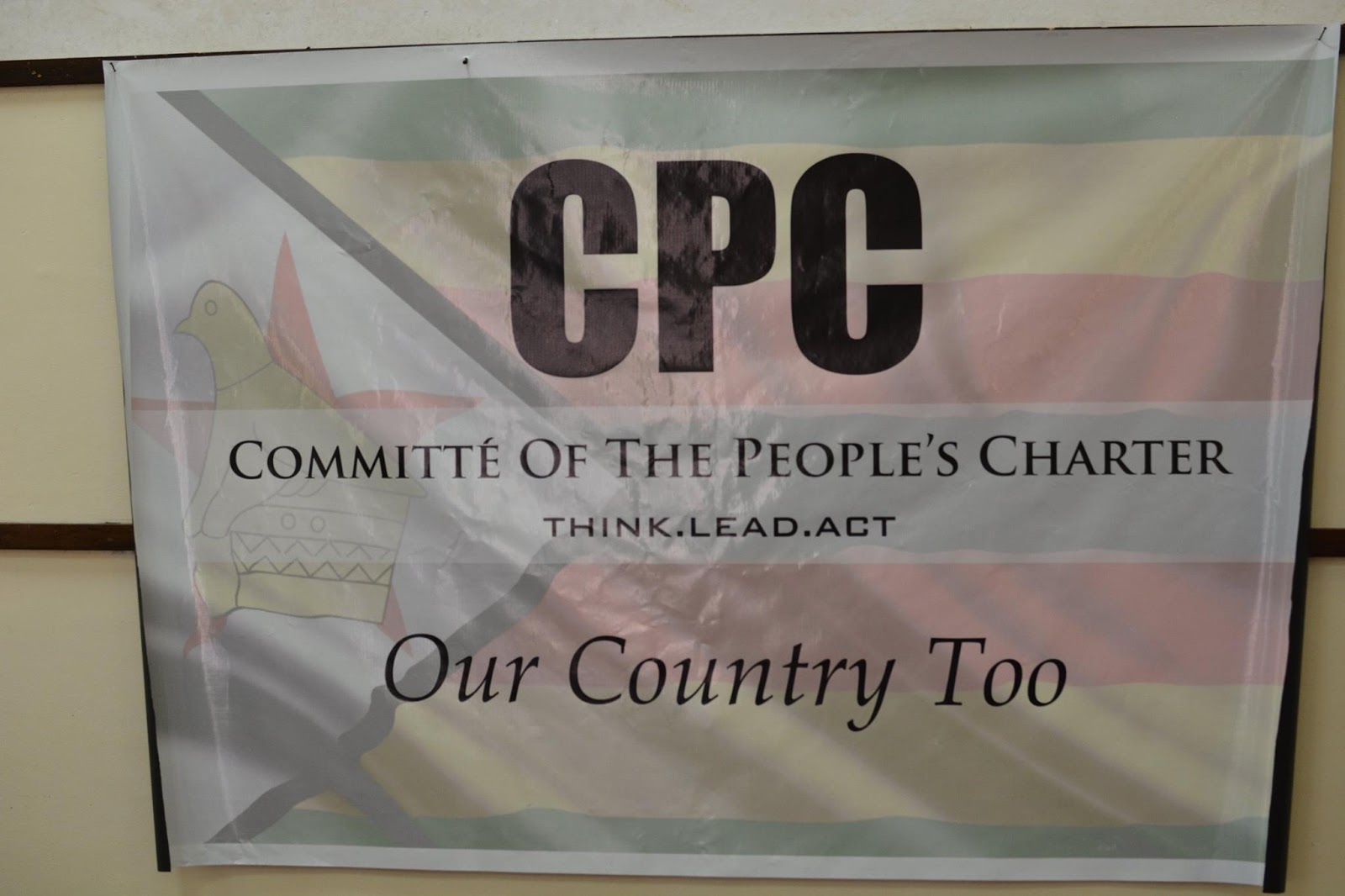 February 9, 2017, marked the ninth anniversary since the adoption of the Zimbabwe People’s Charter. The Charter, being a product of wide consultations with the masses throughout the country was debated and produced by the more than 3 000 representatives of workers, students, churches, business, women and youth organisations.
Fundamentally, a critical interpretation of the People’s Charter is based on the view that Zimbabwe, since colonialism, has remained a country lacking the rule of law, a country characterised by the militarisation of arms of the state and government.

The People’s Charter, therefore, calls for the establishment of a social democratic Zimbabwe, in which the people are guaranteed safety and security and a lawful environment free from human rights violations and impunity. It still occupies an important role in our politics.

It seems, however, that when the Charter came into existence, there seemed to be a de facto obligation on the civic society and all social movements and struggling to transform Zimbabwe to define at some point their position vis-a-vis the Charter.

The first major meeting of the stakeholders was called for in 2011, only as a means of defining their position with regards to the Charter. It was also a meeting aimed at charting a way forward and that the civil society and social movements would be able to establish ‘our’ identity in the Zimbabwean body politics.

It was also that meeting that the Committee of thePeople’s Charter (CPC) was conceived as a political, economic, social and democratic accountability mechanism established in the interests of the people of Zimbabwe.
Its main aim was to bring the Zimbabwean government of the day to account in relation to the national economy, gender equality, youth empowerment, a democratic political environment, free and fair elections, constitutional reform, media freedom and Zimbabwe’s national value system, as aptly espoused in the Charter.

Moreso, defining a position vis-a-vis the Charter involves more than its simple endorsement or rejection. In a way, the Charter can be interpreted as an ambiguous document, despite its pithiness and simple language.

The range of possible meanings contained within the Charter has resulted in it being interpreted in a variety of ways ‑ though sometimes contradictory. However, such semantic disputes are by no means politically inconsequential, as they involve fundamental theoretical and strategic questions.

It is the meaning of the constitutional reform clauses of the People’s Charter that generated immense dispute to date. These call for a new Constitution of Zimbabwe, which must be produced by a people-driven, participatory process.

In Article XI of the Global Political Agreement, the rejection of the Charter was imminent, as the civil society movement unashamedly endorsed such clauses in direct contradiction to the dictates of the Charter.

A snapshot of the Charter’s demands on the Constitutional reform are as follows: “The People shall have a constitutional reform process, which is characterised by the following: -Comprehensive consultation with the people of Zimbabwe wherein they are guaranteed freedom of expression and information, association and assembly. The collection of the views of the people and their compilation into a draft constitution that shall be undertaken by an All-Stakeholders’ Commission composed of representatives of government, parliament, political parties, civil society, labour, business and the church with a gender and minority balance.”

I would argue that not many civil society organisations accorded the Charter any pertinence to their struggles to date and from the outset never perceived the Charter as relevant to its exigencies.

The signing and adoption of the Charter in 2008 was a realisation from the civic movement that there was a need in our democratic struggle to have a framework of ideals, aspirations to attain the revolutionary struggle. But we reflect on the fact that a few months after the many organisations appended their signatures to the Charter, the struggle veered off the road, as the collective movement faced its biggest test.

Clearly, I should highlight that some of the key components of the People’s Charter were neglected both when the elections came and at the consummation of the coalition government.

While acknowledging the shortfalls on the constitutional reform process, the civic movement and prodemocracy movements capitulated on the electoral framework, as expounded by the Charter.

While the ink in March 2008 had not dried up, the civic movement’s shortcomings were exposed by the ‘strategic’ move to openly declare allegiance and campaigning for the MDC led by Morgan Tsvangirai in an election that fell short of the demands of the Charter.

Section 2 of the Charter acknowledged that “all elections in Zimbabwe remain illegitimate and without merit until undertaken under a new democratic and people-driven constitution, Equal access to the media. One independent, impartial, accountable and well-resourced electoral management body. A process of delimitation, which is free from political control, which is accurate, fair, transparent and undertaken with full public participation. A continually updated and accurate voters’ roll, which is open and accessible to all. Transparent and neutral location of polling stations, agreed to through a national consultative process devoid of undue ruling or opposition party and government influence, which are accessible to all including those with special needs”.

The 2008 election never met an inch of that demand and this partly explains the five-week delay in the announcement of the presidential results.

As Lenin would say, that at all times, the revolutionary organisation must maintain political independence, I posit that it was, therefore, wrong for the civic movement to abandon freshly conceived the principles on the altar of political convenience.

Also key is the debate around the national economy, and the Charter calls for people-centered economic planning that guarantees social and economic rights.

It enunciates the state’s responsibilities to “initiate public programmes to build schools, hospitals, houses, dams and roads and create jobs and above all equitable access to and distribution of national resources for the benefit of all people of Zimbabwe”.

Such demands are non-negotiable until they are realised. The current government’s populist economic framework in guised is guised as centred around a pro-poor initiative while in reality it is pushing oligarchic capitalism, is certainly not attainable and befitting for our people, emerging from the background of an equally skewed colonial legacy.

To this day, the Charter remains the beacon of hope and the clearest statement in the struggle for a better Zimbabwe.

The People’s Charter is, indeed, a revolutionary programme for the masses, which could have gained significant gains for the masses.

Consequently, an admission should be made that key components of the People’s Charter were neglected in the transition to an inclusive government.

The social movements, working class, the youth, the church, the women, whose signatures were appended to the People’s Charter, illustrates its weight and, therefore, it should never be undermined or misinterpreted.

It is a living document, a People’s Manifesto that belongs to the people of Zimbabwe and that will never change anytime soon.

Essentially, what needs to be done going forward is interrogation and robust engagement of the tactics we take towards the total attainment of the People’s Charter objectives until it is envisaged. The current struggles should embrace the Charter as a living manifesto that will transform our society for the better.

Therefore, the civic society should remain independent, and never should we compromise on the aims and aspirations laid out in the People’s Charter. It still remains a revolutionary programme that is rooted in the people with a clear mandate.

The Charter acknowledges that: “All people in Zimbabwe live in a society characterised by the tolerance of divergent views, cultures or religions, honesty, integrity and common concern for the welfare of all. All people in Zimbabwe are guaranteed safety and security, and a lawful environment free from human rights violations and impunity.”

As a result, we must have a conscious strategy. We must be disciplined, mobilise, train and educate the young and new comrades in our social and political movements. It can only be by recruiting and ideological training that will help the movement remain focused.

The work of the civil society and social movements should not be haphazard, but rather systematic and consciously laid out. We cannot run away from the People’s Charter, as it basically provides us adequately with that framework. The task at hand is to reach out to the lowest members of our society and eventually win the broadest masses.

As we celebrate the nine years since the adoption of the Charter, we have not totally failed; despite that yes, there have been detours, breakdowns, and accidents, but never has the ultimate trajectory and the aim of achieving the democratic revolution been lost.

Let us continue to work, intensifying our engagement with the grassroots until we achieve the objectives of the People’s Charter.