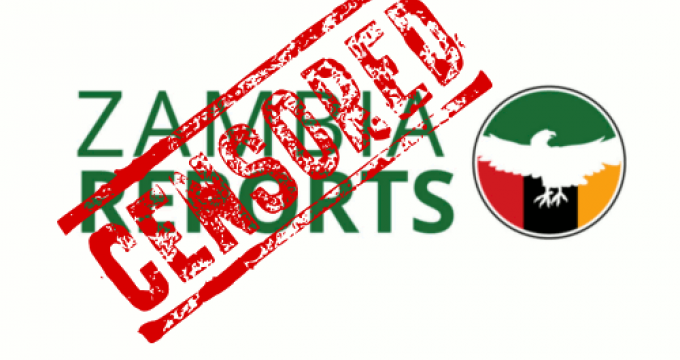 Zambia’s press freedom record continues on a downward spiral with a government decision to shut down some independent broadcasting houses on Monday 22nd August, 2016 on allegations of unprofessional conduct in the pre-election and post-election period. This comes a few months after the biggest independent newspaper, The Post which was very critical of the ruling party and government was ground to a halt for alleged tax violations.

According to a statement from IBA Chairman Brigadier Justin Mutale, the IBA board met on Monday morning and resolved to withdraw licences for the three independent media houses.

Brigadier General Mutale said the decision followed what he described as the unprofessional conduct in which the three stations had conducted themselves in the recent past, which had posed a risk to national peace and security.

Earlier on Monday Muvi Television had published a story alleging that the Electoral Commission of Zambia had deleted votes from the final vote for President elect Edgar Lungu from a named constituency and allegedly quoted the commission spokesperson who later denied having given any interview on the matter. This was probably the story that triggered the action among other previously documented violations of the electoral code of conduct by the three media houses.

The IBA invoked its powers under Section 29 (1) (ii) of the IBA Amendment Act of 2010 which prescribes that the Board may cancel broadcasting licence if the cancelation is necessary in the interest of peace and security, welfare or good order.
The Press Association of Zambia (PAZA) has described the suspension of the licenses as illegal as the three media houses were not given an opportunity to be heard as required by the IBA Act. PAZA President Andrew Sakala said the IBA Board must therefore give the three broadcasting stations an opportunity to state their case before any action could be taken against them.

“We urge the IBA Board to follow the law to the latter and exercise its powers as a regulatory board in a cautious and judicious manner” Mr Sakala said.

Brigadier General Justin Mutale said the Authority had observed that before, during and after the August 11 2016 elections, Muvi TV, Komboni Radio and Itezhi Tezhi Radio have been conducting themselves in an unprofessional manner contrary to the provisions of the IBA Act.

“It has therefore become necessary to suspend the licences of the three stations in public interest,” Brigadier General Mutale said.

The stations have been given 30 days in which to appeal the decision of the Board as provided for in the IBA Amendment Act of 2010.

Public Reaction to the Closure of Broadcasting Houses

The decision to shut down the media houses has been described by some as a form of dictatorship on the part of the state and a clamp down on media freedoms. Others felt that the move was justifiable given the tensions that came with the elections partly fueled by inflammatory media stories.

“where the peace of our dear nation is threatened because of false and unconfirmed reporting, we expect the law to take its course- whether others see it as a politically motivated move or not. Muvi tv has- in recent times- been broadcasting a lot of unconfirmed and false news. One of the notable ones is the removal of 8000 votes from President Lungu on the figures he got in Lundazi. This information has not been confirmed by ECZ. And looking at the current tension the country is going through, it was not wise for them to air such a fabricated story that has serious potential to damage the peace the country has been enjoying. So, in as much as I do sympathise with Muvi tv and its workers, I feel the move is inevitable; at least until the political frucuss is over. I rest my case.”

“We know that LUNGU is the one behind this……if u close muvi tv for siding with the opposition then they should as well close down ZNBC for siding with a wrong ruling party coz it does not just make sense…….shame on pf.”

Zambian authorities have warned that they will not hesitate to take decisive action against any broadcaster found to be unprofessional in their broadcast. Muzala Munjako Lukama Mubana supports the decision by the government.

“IBA is on point and should be supported but this suspension is and should not take ages to lift the affected Media houses should be cautioned and educated on the importance of disseminating correct information especially at a time as this. In as much as we would all want to enjoy the freedom of expression we need to do so responsibly. Fr a long time we have seen the protection of the Media by Misa Zambia, though I do not agree with them entirely on some positions they have taken especially when the Post was closed, I commend them for a Job well done. However, I wish to highly commend IBA for protecting Zambians from falsehood this is something I have been waiting for a balance in the right to be protected. Misa Zambia on the Medias side and IBA on the peoples side. If you know what escalated the Genocide in Rwanda you will appreciate the action taken this far.”

On July 1, 2016 with reference to the closure of the Post newspaper Law Association of Zambia (LAZ) member Franco Kapijimpanga said there was a thin line between the political promise by President Edgar Lungu to deal with Fred M’membe and The Post and the issue of ZRA collecting taxes from the newspaper.

“When you receive an oppressive order or an order that you think is wrong, there are ways in which you can challenge it. You go and apply to set it aside, not disobeying it. ZRA’s mandate is to collect taxes and there is nowhere it says they shouldn’t collect tax from The Post or that maybe Post should not pay tax; that is not the issue, the issue is fair treatment of The Post. Is it the only institution that owes ZRA? It is not. There are several, including some mines, that have not been remitting royalty. Those are colossal sums of money.”

And Kapijimpanga said it was very difficult to separate tax requirement and the politics at play surrounding the closure of The Post because President Lungu recently made a promise to deal with the newspaper.

“If the executive is out of line, let us call a spade a spade. If the police are irresponsible, let us call it for that. This is the Zambia that we desire,” Kapijimpanga said.

State of Freedom of Expression

The 2016 Freedom House Country Report on Zambia noted serious violations on Freedom of Expression and press in 2015:

Freedoms of expression and of the press are constitutionally guaranteed, but the government frequently restricted these rights in practice in 2015. Although the Patriotic Front (PF) led government has pledged to free the public media—consisting of the Zambia National Broadcasting Corporation (ZNBC) and the widely circulated Zambia Daily Mail and Times of Zambia—from government control, these outlets have generally continued to report along progovernment lines. Many journalists reportedly practice self-censorship.

The ZNBC dominates the broadcast media, though several private stations have the capacity to reach large portions of the population. Roughly 17 percent of the population accessed the internet in 2014, according to the International Telecommunication Union the Freedom House report states.

“Journalists at public, community, and privately owned outlets faced stepped-up harassment and attacks by government officials and PF supporters throughout 2015, especially in retaliation for hosting opposition figures or criticizing ruling party officials on the air. In July, armed PF supporters in Kitwe entered the offices of Radio Icengelo and disrupted its operations just before the UPND’s Hichilema was scheduled to speak on one of its programs. In August, Central Province Minister Davies Chisopa of the PF ordered the dissolution of UN-supported Mkushi Radio’s board over its alleged bias toward the UPND.

“The same month, ZNBC radio producer Martin Maseka, who also leads Zambia’s broadcasters’ union, was suspended from his job at the station for publicly criticizing Information Minister Chishimba Kambwili’s threat to fire ZNBC staff who had been protesting questionable management practices at the broadcaster. In October, Kambwili threated to revoke the broadcasting license of Lusaka’s Radio Phoenix, saying it disseminated antigovernment propaganda. Also that month, Christine Ngwisha was dismissed from Radio Phoenix, days after interviewing Kambwili on one of the station’s live programs; Kambwili had complained that the absence of callers-in during the interview indicated that the station supported the UPND.

“In December, PF supporters in Chipata disrupted a live broadcast on Breeze FM featuring opposition Rainbow Party president and former PF secretary general Wynter Kabimba, assaulting a security guard and inflicting property damage. Following the incident, the station cancelled all its political news programming for fear of becoming a target of violence. A week later, Post newspaper journalist Peter Sukwa and Feel Free Radio journalist Kelvin Phiri were attacked by PF supporters while investigating allegations that non-Zambians were being registered as voters in Vubwi, on the border with Malawi. One of the journalists reported that an attacker had urinated into his mouth, and had poured fuel on him and threatened to set him alight. A deputy home affairs minister, Colonel Panji Kaunda of the PF, condemned the attack and called on police to make arrests.

“Government officials frequently bring lawsuits in response to critical or unfavorable reporting. In May, Post newspaper owner Fred M’membe was arrested along with one of the newspaper’s reporters for publishing a letter from the Anti-Corruption Commission indicating that a presidential aide was being investigated. They were charged with publishing classified information, and the case against them remained open at the year’s end. Although artistic expression is generally free, in June artist Fumba Chama (also known as Pilato) was arrested and charged with conduct likely to cause a breach of the peace in connection with his satirical song about Lungu. His case was discontinued in July.”