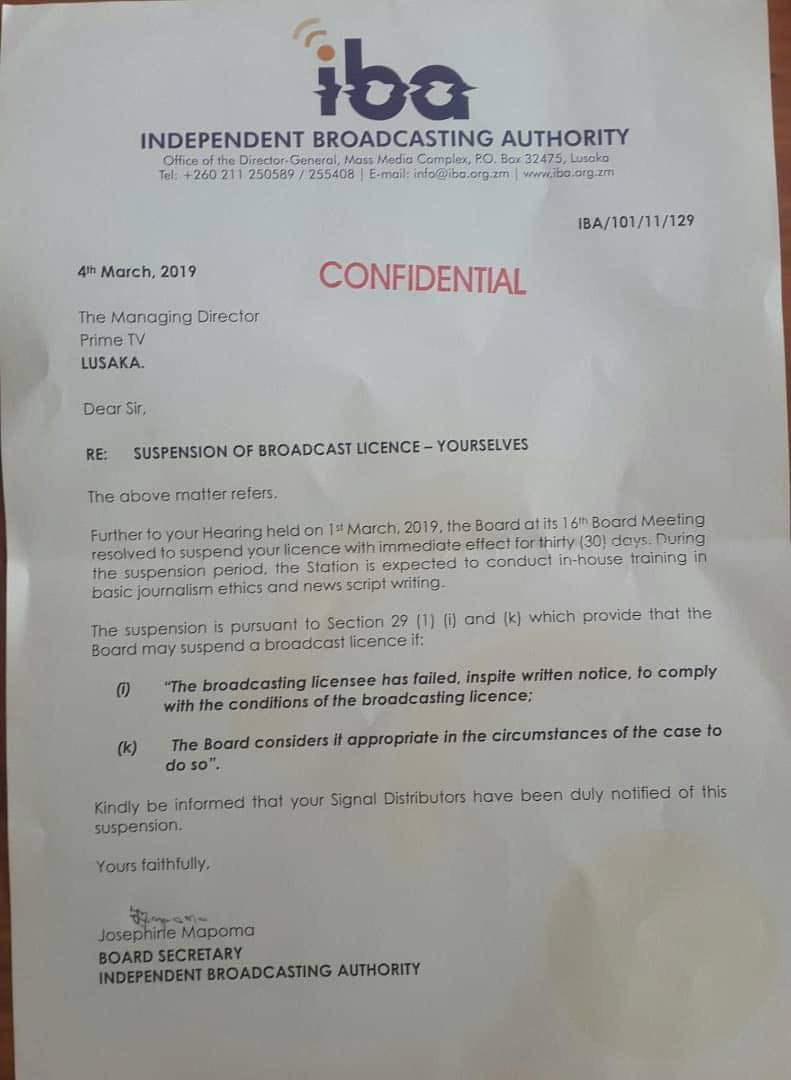 Zambian authorities have continued to use state institutions to muzzle the independent press. The crackdown seems to always heighten around election periods. The latest victim is Prime Television which has received a one month suspension of broadcast license together with private radio station Valley FM and revoked two licences of Ngoma and Kafue radio stations for breaches associated with content relating to the coverage of recent by-election in which the ruling party lost.

Announcing the suspension IBA Board Secretary Josephine Mapoma says Prime Television has been suspended for exhibiting unprofessional elements in its broadcasting through unbalanced coverage, opinionated news, material likely to incite violence and use of derogatory language.

She adds that during the suspension the station is expected to conduct in house training on basic journalism ethics and news script writing.

A few days before the suspension, media freedom watchdog The African Freedom of Expression Exchange (AFEX) firmly condemned the recent attacks by affiliates of Zambia’s ruling, Patriotic Front (PF) party against Prime Television based in the capital, Lusaka.

The privately owned TV station has come under attack following its reportage on the Sesheke parliamentary by-elections in Western Zambia which the ruling party lost convincingly.

“We also deplore the complicity of the media regulator, IBA in these attacks that are obviously calculated to silence the critical media house. Prime TV, like any other media outlet in Zambia, has a constitutionally guaranteed right to carry out its journalistic work freely and without interference from any quarters. The hostility to which Prime TV has been subjected is therefore an affront to article 20 of Zambia’s republican constitution. Zambia’s governance system is hinged on the principle of democracy where freedom of expression is critical to citizens’ participation in the country’s governance processes. It is in line with this principle that AFEX is urging officials of the PF party to cease its intolerant attitude towards divergent views and opinions from critical media outlets in Zambia.” Their statement said.

Governance Elections Advocacy and Research Services (GEARS) a leading governance civil society organisation in Zambia mourned the assault on media freedom being occasioned by Independent Broadcasting Authority (IBA) against media houses perceived to be critical of government and the ruling party.

According to Executive Director Macdonald Chipenzi, the decision by the IBA to continuously harass, intimidate and suspend such institutions is a threat to democracy which preaches existence of free and diverse media outlets for the flourishing of diverse and alternative opinions in the development of the Nation.

“The selective  punishment  being applied only to media stations critical of government and ruling party is overt for all to see. We, therefore, call on IBA to be seen to be impartial and treat all media outlets equally if the desire is to enforce professionalism and ethics in news contents, reportage, coverage and analysis among all media houses. The sad part is that the suspension of Prime TV is coming at the time when ruling party officials complained against the station for allegedly disabling it from winning the Sesheke Central Parliamentary by-election election.” He said

The Sesheke electoral outcome has not sat well with government and ruling party which has used state institutions to harass, intimidate, transfer, demote and retire several civil servants, teachers and now media on account that they contributed to the ruling party’s electoral loss during that by-election which is covertly done using other reasons.

In the view of GEARS, the same IBA which is now being used as a tool of media suppression and oppression has not moved on other media outlets that favourably reported and covered the ruling party and unprofessionally and unethically covered and reported on the other players in the Democratic Process.

Mr Chipenzi urged the Prime TV and other affected stations to seek judicial redress on this matter and pursue justice to the latter.

“The actions of the IBA against selected media outlets is already placing a chill hand of unfair, not free and not independent reportage of the electoral process ahead of the Kafue, Bahati and Roan by-elections yet to be held as the other media may be timid to courageously cover and expose  electoral irregularities, blackmail and corruption associated with electoral campaigns. It also instil serious fear of unfair or total black outs of critical voices by media stations ahead of the 2021 general elections for fear of being suspended or closed down by IBA. The suspension and revocation of broadcasting licences is also insensitive to the families that dependent on Prime TV and other media outlets affected for their livelihoods thereby contributing to an already high unemployment rate in the country.”

On January 26, 2019, the Secretary General of the ruling Patriotic Front (PF) party, Davies Mwila, dismissed Prime TV reporters from a press briefing he was addressing. He also declared publicly that Prime Television is barred from covering all activities of his political party. The comments by the Secretary General of PF also incited cadres of the party against journalists working with the TV station.

In the most recent attacks against the station, a group of young people believed to be a pro-PF vigilante group reportedly attacked three reporters of the station in separate incidents within a space of two weeks.  On February 14, 2019, members of the vigilante group attacked Wells Chifunda who is a court reporter for Prime TV. Six days prior to the above incident, the supporters of the party on February 8, 2019, physically assaulted and confiscated a laptop belonging to Lloyd Kapusa, a reporter for Prime TV while another reporter, Kazela Habwanda of the TV station was also attacked by the group in a separate incident on February 5.

Some state actors also encouraged these attacks by openly antagonising the media outlet in their public pronouncements. On February 13, 2019, the Minister of Information and Broadcasting, Dora Siliya at a press briefing accused Prime TV of reporting the violent incidents that happened during Parliamentary By Elections in Sesheke, a town located in the western province of Zambia in a sensational manner.

The Deputy Media Director of the PF party, Antonio Mwanza, was also quoted by an online blog, TP News, on February 13, 2019 as saying that “Prime TV must be closed down…the IBA [the media regulator] has already been directed to revoke the licence….”

Following the hostile declarations by these powerful officials, the Independent Broadcasting Authority (IBA) on February 15, 2019, sent Prime TV a letter requesting for the station’s editorial policy and broadcast recordings of its political show, News Bulletin and Oxygen of Democracy Programme. The request followed a complaint by the Secretary General of PF party accused Prime TV of biased and unethical reportage in the said political news bulletin.

He says if there was any interference and he does not agree, the noble thing he could have done was to resign and not allow to be used by anyone.

Not long ago, the Minister for Lands and Natural Resources, Jean Kapata, a senior political party official of the PF party threatened to cause an attack on Prime TV. Kapata was quoted saying “to Prime TV, we are not warning you we are telling you that if you continue this type of reports, disparaging the government day in day out, these women that you are seeing here shall come and close down your studio.”

The IBA again on February 28, 2019 summoned the management of Prime TV and demanded that the station renders an apology to the Secretary General of the PF party within 14 days for alleged biased reporting on the party.

On the other hand, opposition political parties and civil society organizations have been complaining about the monopoly by the public media houses Zambia National Broadcasting, Times of Zambia, and Zambia Daily Mail which are exclusively giving political coverage to the ruling PF only while blacking out other voices.