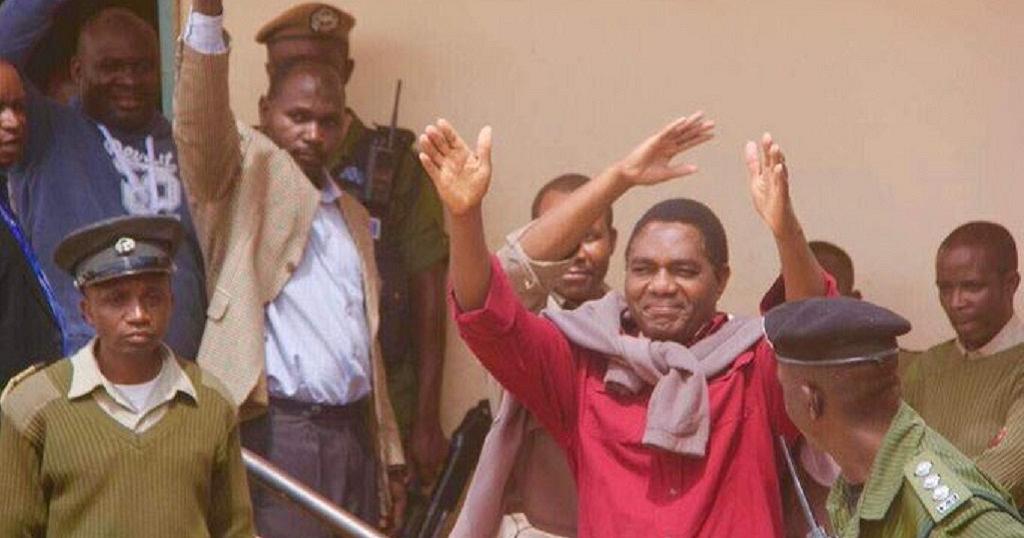 Zambia’s main opposition party, United Party for National Development (UPND) has continued to receive a bashing from the Patriotic Front (PF) government with the church and civil society raising alarm at what they describe as an accelerated move towards a dictatorship. Zambia now has a situation where opposition leader, Hakainde Hichilema remains in indefinite detention and opposition in the National Assembly has been crippled by the government. Hichilema is in jail on charges of treason on allegation that his motorcade blocked President Edgar Lungu’s motorcade as they both drove to a traditional ceremony in western Zambia last April.

Hichilema was recently committed to the High Court and forcefully airlifted from Lusaka Central Prison to a maximum remand prison in Central Zambia. The prison is famous for housing hardcore criminals and inmates on death row. His lawyers says Hichilema’s safety could not be guaranteed while his wife and family members have complained of great difficulties in accessing the incarcerated leader despite a recent court order granting wider visitation rights.

When parliament resumed sitting on Tuesday 13th June, 2017, another shock was to hit Hichilema as the speaker of the National Assembly Patrick Matibini referred the matter in which the UPND leader is alleged to have issued disparaging and contemptuous remarks against him to the Police Inspector General for criminal investigations. He also referred him to the Director of Public Prosecution for possible prosecution in line with laws of the National Assembly.

Hichilema was not the only one to receive the knocks, 48 out of his 58 Members of Parliament were also banished from the house for one month without pay. The opposition MPs suspension from the house relates to what the speaker describes as the unauthorised absence of the UPND Members of Parliament from the House on Friday 17th March, 2017, when President Lungu, delivered the State of the Nation Address on the Application of Constitutional Values and Principles to the House.

The ruling has far reaching implications on the legislature. Committees will not be sitting because most members are back benchers and most committee chairs are opposition MPs. Bills also can’t pass properly given that even the remaining 10 UPND are likely to also stay away. It is even worse that the 14 independent MPs usually vote with the ruling PF together with the three Movement for Multi-Party Democracy (MMD) whose party is in alliance with the PF.

There are genuine fears that the PF may bulldoze its way and pass controversial bills considering that there will be no opposition voice in the house. Opposition members are already raising fears that PF may succeed in passing legislation to revert to a one party state and also enact a law to dissolve the Law Association of Zambia, whose criticism of government has greatly unsettled the ruling party.

There was a plot to dissolve the Law Association of Zambia spearheaded by MPs from the ruling party that failed. PF Kasama MP also published a private members bill to facilitate for the enactment of a law that would bring in place a new law society. It is possible that such a law may be pushed in in the absence of the opposition.

Some analysts have argued that whilst the Speaker acted within the bounds of the law as he has the authority to suspend any MP who stays away from the House without permission, the mass suspension of 48 opposition MPs was punitive, unprecedented and a brazen assault on parliamentary democracy. Political analyst Shishuwa Shishuwa observed that the UPND is the leading parliamentary opposition party with 58 MPs (10 of whom had permission to be absent from the National Assembly on the material day), and suspending such a high number of lawmakers, especially at a time when its leader is in prison on a non-bailable charge of treason, suggests an organised effort to weaken the opposition.

Speaker Matibini argued that the suspended MPs had broken the oath of allegiance to the President.

“Therefore, by taking the oath of allegiance, the UPND Members are expected to be respectful to the Head of State and Government. Therefore, by boycotting the presence of the President in the House, when they previously swore allegiance to the President, the Members were being disloyal, disobedient and in fact, violated their oath of office…” he said.

The suspended MPs have sought judicial review of their suspension.

UPND Parliamentary Chief Whip Garry Nkombo addressed the press flanked by his fellow suspended MPs and warned that posterity will judge Speaker of the National Assembly Dr Patrick Matibini for his emotional decision to suspend 48 opposition MPs. He expressed fear that the Patriotic Front wanted to manipulate the Constitution in the absence of the UPND MPs.

He charged that the suspension would not change the MPs one bit but that they would emerge stronger. Nkombo reminded the speaker that the suspected MPs were elected members and not appointed or nominated.

“This is how dictatorship begins, this is how the dictatorship asserts itself. And for now maybe to also just say on behalf of all the constituencies that are represented by the members affected here is to say just be steadfast, we are coming home for a month, it will be such a joyful thing to be with yourselves. And finally it always is a good thing to remember that when you are half way up, it means you are halfway down. UPND is holding half of the seats in this country. We can only appeal to all right minded people of this country to see what is going on, to see that the state institutions are being manipulated on a daily basis so that by the time they finish with us if they ever manage, there will be no country to talk about,” said Nkombo.

The Oasis Forum, a consortium of leading governance civil society organisations has launched a lawful peace-building initiative and appealed to Zambians to participate in public activities.

“We now live under a cloud of fear that prevents us from expressing who we really are. The Bemba people have a saying, “lmbwa ya mukali tayi chenjela”. Loosely translated, it means that a child raised to be fearful of his parents will not prosper. We are indeed a very poor nation in every respect. Gone is our national pride. We have come to a point in time where we have to choose prosperity   over poverty; peace and unity over destruction   and despair.   That choice is the power that lies in the hands of every Zambian citizen, regardless of race, tribe, creed, gender or political   affiliation,   to say that   enough   is enough.   If we do not participate   in the governance of our country, we will only have ourselves to blame if we lose all that we hold dear. Silence is consent. We must speak out to reclaim our nation and once again raise our flag as a symbol of our national pride. Zambia is bigger than any individual   in the nation.” Linda Kasonde, Oasis Forum chairperson said. Linda is also President of the Law Association of Zambia.

The background to this matter is that whilst the PF retained power by winning both the presidency and the majority of seats in the National Assembly last August, the election was marred by serious irregularities that resulted in a presidential petition and more than 80 parliamentary petitions. The decision on the presidential petition was inconclusive as the Constitutional Court disposed of the matter without ever hearing the evidence and fell short of declaring Lungu the winner as required by the Constitution. The petitioners’ case was not heard, they petitioned the High Court on the constitutionality of being denied their right to be heard as stipulated in Article 18 of the Constitution. This case remains before the High Court and the UPND argues that the party will not recognise Lungu’s Presidency until its legal challenge is conclusively disposed of – a position that appears to greatly inconvenience the governing authorities.