Home » Diplomacy » SHOULD OBAMA INVITE MAGUFULI TO THE WHITE HOUSE?

SHOULD OBAMA INVITE MAGUFULI TO THE WHITE HOUSE? 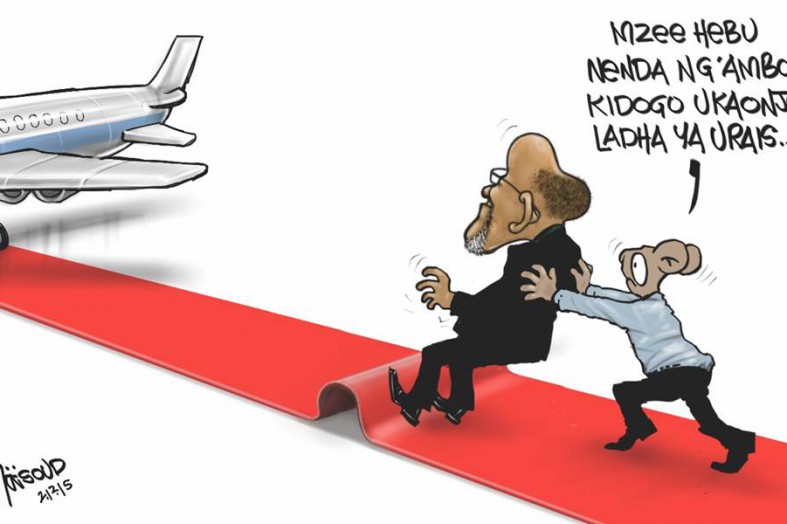 “However, I don’t see Magufuli travelling outside Tanzania in the next 1 yr” – Emmanuel Tayari

Did the Ambassador of the United States of America in Tanzania visit President John Magufuli at the State Souse like the Chinese one? It is a question someone asked me recently. I did not know the answer.

When I asked her why is it (such) a big deal, she said there is a feeling that Magufuli is sidelining the US. It is a feeling I did not share given that I thought the Tanzanian president is primarily hosting those who have asked for an audience with him at Ikulu (Tanzania state house).

Yet it made me recall a guest column that has somewhat gone ‘viral’ in the African social media. Tantalizingly entitled ‘Africa: What Obama Still Owes Africa (a Visit to Nigeria for One Thing)‘, it has a section that starts with the following advice: “Invite Tanzania’s newly elected President John Magufuli to the White House….”
Tellingly, the guest columnist is not some of my fellow Africans within the continent who still demand – and hope for – Obama to do something to ‘save’ us if he is our ‘Messiah’ because of his Kenyan heritage. Rather, it is Johnnie Carson who is thus profiled therein:

What I find particular interesting in is how he describes Magufuli, i.e., “a reform-minded academic-turned-politician.” Although the “Zanzibar election remains unresolved“, the seasoned diplomat nevertheless suggests, “it is important” for Obama “to reach out to Tanzania’s new president early in his tenure to continue to foster the strong relationship between Dar es Salaam and Washington.”

More significantly, Ambassador Carson points out that all this “is particularly important since President Magufuli does not have any major ties with the United States.” In other words, the message is this: We need to create ties that bind us sooner rather than later.

In the wake of ‘new’ revelations about the apparent ties between the Millennium Challenge Corporation (MCC), Symbion Power and and Hillary Clinton in Tanzania, it seems the sooner the better. On December 19, 2015 The Citizen had this to say about what it sensationally dubbed ‘Magufuli nightmare over MCC funding‘:

“Tanzania now stands to lose $472 million (Nearly Sh1 trillion) in development funding from the US in 2016. The MCC board deferred a vote on Tanzania’s eligibility to receive the funds….The MCC which acts as President Barrack Obama’s development funding arm issued a brief statement on its meeting on Wednesday in which it revealed Tanzania’s fate… recently faced political unrest following a power struggle also suffered a similar fate. No specific reasons were cited in their statement but MCC recently expressed concern over the political impasse in Zanzibar as well as the arrests of several people over the cybercrime law in the October elections.”

After citing the MCC Board’s statement as saying it “deferred a vote on [the reselection of] Tanzania and Lesotho for compact eligibility until relevant governance concerns in both countries have been addressed,” The Citizen then quoted the US Ambassador to Tanzania, Mark B. Childress, as thus affirming their rationale:

“I remain hopeful that the Government of Tanzania will take steps to resolve MCC’s governance concerns in the near future. The Board could then vote to re-select Tanzania and approve compact development. The board’s governance concerns reflect longstanding MCC principles. The nullification of election results in Zanzibar halted an otherwise orderly and peaceful electoral process. The use of the Cybercrimes Act of 2015 during the elections to arrest individuals accredited by the National Electoral Commission inhibited fundamental freedoms of expression and association.”

Now it appears there are serious ‘governance concerns’ in and on MCC that have hardly been addressed. In his analysis of Clinton’s controversial emails, Chuck Ross is connecting the dots. However, it seems the Ambassador who is advising the US President to invite the Tanzanian President was/is well aware of what was/is going on.

Ross’s article dated October 4, 2015 reviews the email exchange between Carson and Clinton that indicates the latter supported an ex-Ambassador Joseph Wilson who consulted for Symbion. It is important to recall that Symbion acquired the controversial power plant behind the Richmond and Dowans scandals in Tanzania. And it is also useful to note that both Clinton and Obama visited this power plant in Ubungo, Dar es Salaam in separate occasions.

Curiously, this is what happened, according to Ross’s article dated December 17, 2015 that aptly triangulates her released emails:

Such a context makes one wonders why Ambassador Carson (really) wants President Obama to invite President Magufuli to travel all the way from Ikulu to the White House. Is it (only) to help “Burundi” and “Eastern Congo” so as to promote “stability in the Great Lakes region”? Or aid Clinton in her bid for the presidency?

Perhaps it is to promote American corporate interests in ‘power’.