What explains Tanzania’s Reluctance to Intervene in Cabo Delgado? 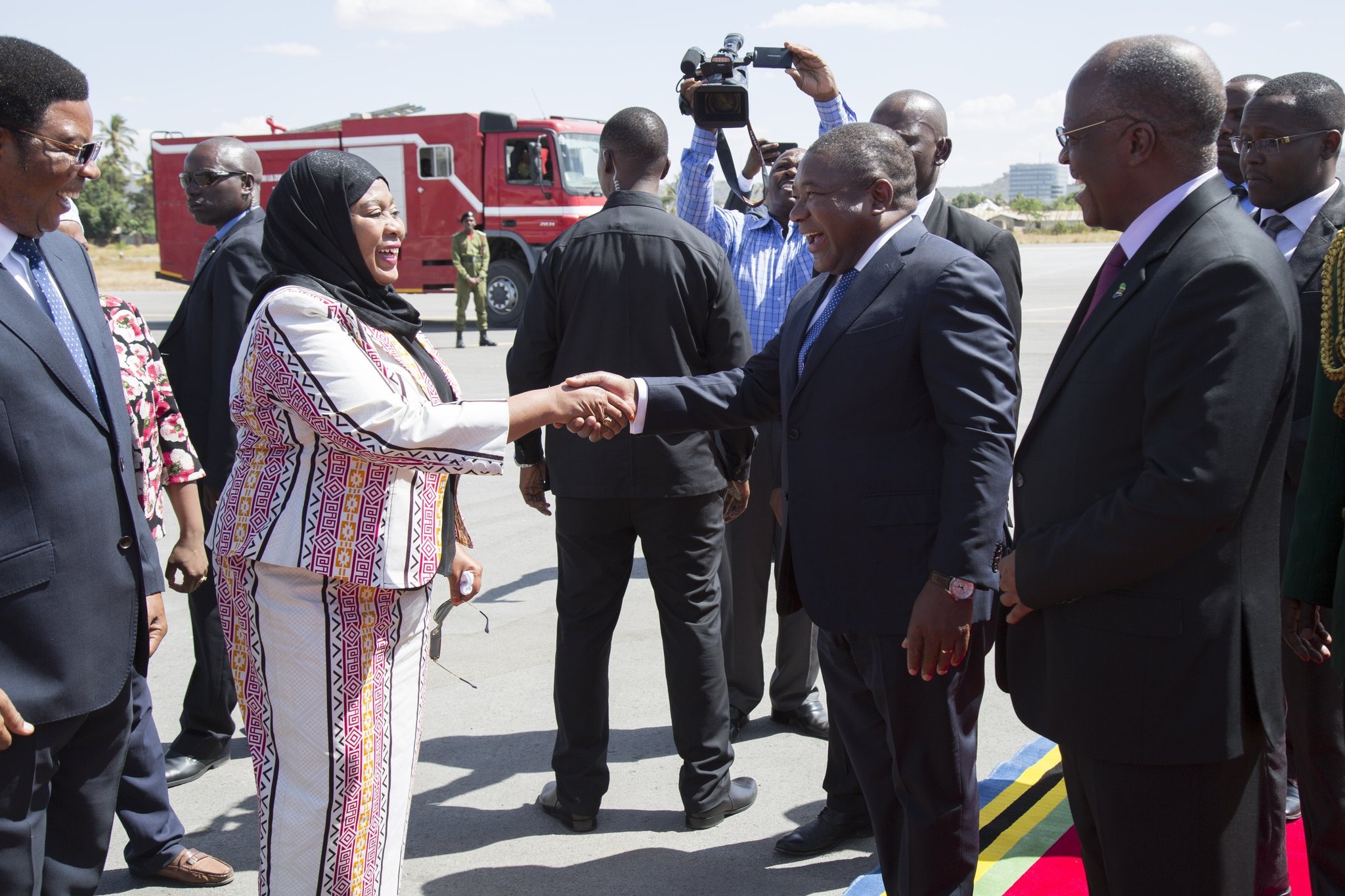 On 11 January 2021, Filipe Jacinto Nyusi, the President of Mozambique and chairperson of the Southern African Development Community (SADC) landed in Chato district – Geita region, for a long-awaited meeting with his (then) counterpart and northern neighbour – John Pombe Magufuli. A press conference convened a day earlier by Palamagamba Kabudi, then Tanzania’s Minister for Foreign Affairs and East African Cooperation had revealed that the trip would focus on bilateral ties, including exploration of avenues for enhancing mutual trade, and investment. There was, surprisingly, no public reference to a growing security problem in Cabo Delgado, a large province in northern Mozambique, and one that borders Tanzania. Nonetheless, Minister Kabudi mentioned an important hint that the trip should have taken place sometime in 2020, but Tanzania’s general election – which took place on 28 October – was a stumbling block.

Based on Minister Kabudi’s information, President Nyusi had sought to visit his counterpart in either September or October 2020, a period when the security situation in his own country, especially in the Cabo Delgado province, was deteriorating. Insurgents – known locally as Al Shabab – had attacked Macimboa da Praia, a district capital in August 2020, and occupied important public installations. The occupation of Macimboa da Praia, a town very close to the country’s natural gas endowment and budding installations was significant, for it embodied “the insurgencies growing strategic competence.” Mozambique defence forces were losing ground, in spite of disparate support from mercenaries, and there was a need for structured, reliable and external (state-sanctioned) support.

It is ironic that Tanzanian authorities were putting emphasis on commercial relations, as underlined by Minister Kabudi’s messaging, at a time when security cooperation was a dominant priority for President Nyusi. It is also worth noting that a significant cross-border attack by the insurgents and the only major incident to date, against a village located on the Tanzanian side in October 2020 did not seem to help Nyusi’s course. According to a recent budget speech, the two leaders “agreed to strengthen bilateral relations, improve trade volume and investment, and cement good neighbourliness.” Nyusi went back with such misaligned promises and ended up witnessing a further advance of the insurgency.

A major attack on Palma, a district that hosts the country’s Liquefied Natural Gas (LNG) project took place in March 2021 and heightened the leader’s desperation for assistance. Alarmed by the rapid pace of deterioration, SADC initiated a consideration for deploying an intervention force in April. While President Nyusi attended Magufuli’s state funeral in Dodoma and delivered a moving eulogy, there is no indication that he got an opportunity to broach the security assistance issue to his new counterpart – President Samia Suluhu Hassan. Having made no tangible progress in convincing Tanzania, President Nyusi requested bilateral support from Rwanda – a non-SADC member – in May, and soon after a Rwandan delegation visited Cabo Delgado for reconnaissance. In late June, SADC endorsed a recommendation to dispatch a standby force, as soon as possible, and in early July, Rwanda initiated deployment of a 1000 strong, mixed contingent of police and soldiers.

Tanzania is the only SADC member-state that has openly expressed its ambivalence about military intervention. In May, even before SADC had taken a decision on the recommendation to deploy troops, the Tanzanian foreign affairs Minister – Ambassador Liberata Mulamula – revealed the country’s position that authorities weren’t ready to send troops, and hinted at concerted dialogue between various stakeholders, as well as development assistance as preferred solutions. Besides, a press release on the meeting that endorsed the SADC deployment, and which was attended by President Samia, mentioned President Nyusi’s appeal for “collective effort” from SADC members and avoided any direct reference to the deployment decision. It is obvious that Tanzania is not ready to send its own troops to Mozambique, through a bilateral arrangement. What is not clear is whether authorities will consider contributing troops to the SADC standby force.

There are several overlapping factors that appear to be informing Tanzania’s reluctance to intervene bilaterally, and which will most likely underpin a consideration of whether to join the SADC standby force.

The first is a limitation arising from its current policy priority. Since the beginning of the 2000s, Tanzania made a decision to focus on economic diplomacy, with the intention of exploiting its historic sacrifices particularly in Southern Africa, and notable reputation for stability around the world, to spur economic growth. The country’s leadership role in an African Union-backed operation to depose a renegade army officer in Comoro’s Anjouan in 2008, pointed to a commitment to establish a balance between the pursuit of economic interests, and the fulfilment of international obligations. However, the emphasis on economic diplomacy gained overwhelming momentum during President Magufuli’s tenure and has been maintained by President Samia, as confirmed by Ambassador Mulamula’s recent speech in Parliament.

While the country remains, in principle, a commitment to supporting peacekeeping, and conflict resolution around the world, it is no longer willing to do so in a manner that would undermine its economic or financial standing. After all, there are fairly popular sentiments that the country would have been fairly ahead economically if there had been a degree of restraint in allocating the nation’s treasure and blood to idealistic courses.

Another factor emanates from the cost of intervening in a neighbouring country, such as Mozambique. Tanzania’s support for liberation in Southern Africa, particularly in Mozambique was associated with cross-border raids from forces funded by apartheid South Africa, and the then Southern Rhodesia (Zimbabwe). Broad, and shared feelings of marginalization in the two southern regions of Lindi and Mtwara, as documented by recent research, have been attributed to the brunt of the war borne by the local population, and the successive governments’ failure to implement targeted, and corrective development initiatives.

The two southern regions of Lindi and Mtwara remain volatile, as symbolized by the violent natural-gas related protests in 2013. The presence of natural gas reserves and a plan to construct a major Liquefied Natural Gas (LNG) plant in Lindi have raised the strategic importance of these regions. A deployment to Cabo Delgado would imply accommodating a significant amount of risk, even though security forces have so far been successful in preventing another major attack.

A good, recent case of the cost of intervening in a neighbouring country is embodied in Kenya’s decision to go on a foray in Somalia in 2011. The short-term repercussions, in terms of major targeted attacks such as the infamous Westgate mall and Garissa University incidents, were painful, and the long-term though tenuous benefits in the form of prevention of frequent domestic attacks have come at a huge price. Nonetheless, Al Shabaab remains a potent force, albeit in rural Somalia, and Kenya is struggling to justify its withdrawal mainly because the group remains a threat to the country’s security. It is relatively easy to intervene militarily, but withdrawing isn’t straightforward.

In 1978, Tanzania made a controversial decision to intervene in Uganda following Idi Amin’s attempt to annex the Kagera salient. The successful deposition of the reviled dictator caused a lot of (brief) euphoria amongst Ugandans, but incidents of indiscipline among Tanzanian forces, and the inability to withdraw sooner due to the need to stabilize the country, left authorities in Dar es Salaam in a serious dilemma. Although Tanzania’s intervention played a notable role in shaping Uganda’s security trajectory, it would take more than two decades after the withdrawal for the country to achieve the capacity to assert its territorial integrity.

If there is a lesson to be learned from the challenge of addressing security challenges arising from non-state armed groups, whether Islamist or not, is that the problem is usually systemic, and resolution is likely to take more than a generation to unravel. The critical challenge for interested outsiders lies in committing to this lengthy timeline and accepting the resource implications.

Coordination and intelligence sharing is essential

Evidence suggests that a significant number of insurgents in Cabo Delgado are of Tanzanian origin and may have escaped a crackdown against militants in the Pwani (coastal) region, and other areas of the country between 2017 and 2019, that is, during President Magufuli’s short-lived tenure. The implication is that Tanzania faces an inherent risk from the ongoing situation in Cabo Delgado, and needs to maintain close coordination with those in the frontline.

Tanzania has learned a lot of vital lessons from its recent counterinsurgency work in the coastal region and is therefore in a position to exercise some form of leverage, in what is increasingly becoming a crowded space, through sharing the knowledge. This is important, in light of reports of growing sentiments in Mozambique, particularly among a section of FRELIMO (ruling party in Mozambique) elites that the worsening of the security situation in their country is linked to Tanzania’s initial failure to suppress the problem in its borders, and eventual blunder in allowing a good number of the insurgents to flee, and enter the neighbouring country. In other words, Tanzania is being blamed for refusing to address a problem it exacerbated.

In recent years, Tanzania has supported peacekeeping, and peace-enforcement operations in Darfur, Lebanon, and the Democratic Republic of Congo (DRC). The support is useful in fulfilling Pan-African – and international – obligations, and allows security forces to gain vital war experience, which could include tactics for dealing with new security threats. There have, notably, been losses, particularly in terms of deaths of soldiers (for instance in Darfur, and Congo DRC), but these have been limited, and have had no significant political impact to the extent of affecting decisions on troop contributions.

Transnational security problems, such as violent extremism, require supranational collaborative efforts. As such, it is important for the country to ensure the focus on economic diplomacy does not undermine the ability to coordinate and collaborate effectively, especially on matters that would advance its own security interests. It is in Tanzania’s best interest to secure both its economic and geopolitical frontiers.