Chinese Foreign Minister’s Visit and a New Scramble for Africa 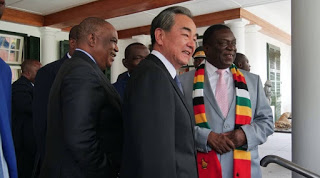 The recent visit to Africa by the Chinese Minister of Foreign Affairs, Mr. Wang Yi, was a pregnant diplomatic statement and reaffirms China’s strong influence on the continent, politically and economically.

Although some pundits viewed the visit as a low-key event, different interpretations can, however, be presented to decipher the meaning of Minister Wang’s visit to Africa and Zimbabwe in particular.

Firstly, the visit is a routine for a Chinese foreign minister to visit Africa at the beginning of each year. However, this visit is significant in the geopolitical dynamics, where the West is also trying to exert its influence on the continent.

For decades, Western imperialism had set a permanent mark on the continent, particularly after the infamous 1884 meeting convened by the German Chancellor Otto Eduard Leopold, better known as Otto von Bismarck, the meeting which regulated European colonization and trade in Africa during the New Imperialism period and marked the first Scramble for Africa.
Significantly, the Chinese minister flexed his muscles during his five-nation a tour that saw him visit Egypt, Djibouti, Eritrea, Burundi, and Zimbabwe, meeting foreign affairs ministers, presidents, and their deputies.

In Zimbabwe, President Emmerson Mnangagwa had to cut short his holiday to meet the Chinese diplomat. Thus then shows the influence China has on the continent.

Chinese imperialism
Secondly, apart from China’s sending an indirect message to its foes, what we can then draw from the visit, the discussions that happened between the Chinese official and leaders of the countries visited and other of such initiatives like Forum on China-Africa Co-operation (FOCAC), clearly shows the emergence of Chinese imperialism on the continent.

Unlike the Berlin 1884 initiative, the Chinese have been clever in their approach to exploiting Africa’s resources in the second Scramble for Africa.

The second Scramble for Africa’s raw materials has seen the West losing its economic influence to China due to the latter’s non-interference, mutual respect, mutual trust, and mutual support.

China vs US battlefront

Thirdly, for China, Africa has been used as an area in which to challenge the West and, in particular, America’s global hegemony. The emphasis by the Chinese of non-interference is a direct reference and mocking of the West, in particular, America, which is constantly accused of meddling in other countries’ internal affairs, something re-emphasized by Minister Wang during his visit openly challenging the West to lift sanctions against Zimbabwe.

In the same vein, the comments made by Mr. Zhao Baogang, the Chinese deputy ambassador to Zimbabwe, while commenting on the new Parliament being constructed by the Chinese in Mt Hampden seems to buttress my argument.

The Chinese deputy ambassador said that the new Parliament was important in the decolonization of Zimbabwe, thus casting aspersions on the former colonial master Britain.

Fourthly, on one hand, the selection of Zimbabwe was not a coincidence, mainly because China’s relationship with Zimbabwe has been one of the most visible in the last decade.
In the early 2000s, Zimbabwe announced a “Look-East” policy anchored on China, with ruling party politicians referring to China as an “all-weather friend”. In a way, Zimbabwe is unique in Africa in that it has more aggressively pursued an active and engaged relationship with China than other African states, hence the visit.

On the other hand, the visit to Zimbabwe by the top Chinese diplomat was an opportunity to show a face of unity following a diplomatic spate last year over a dispute on Chinese assistance to Zimbabwe as well as a four years ago when Zimbabwe kicked out all mining firms out of Chiadzwa.
First, in 2016, the relationship between Harare and Beijing took a dip after then President, the late Robert Mugabe’s government kicked out all miners from Chiadzwa diamond mines.

Then, affected Chinese firms included Anjin and Jinan, but the Zimbabwean government had to later bow to Chinese pressure and re-admit Anjin back into the mining fields.

Last year, the relationship again hit a low after Zimbabwe’s government said it had only received US$3,6 million in aid from Beijing in 2019 ‑ 40 times lower than the figure claimed by China.
Representatives of both countries tried to show a face of unity despite the spat and persistently re-emphasized the friendship between the two countries.

Speaking during the same occasion, Minister Wang said bilateral relations between China and Zimbabwe for the past 40 years had become “stronger and trustworthy”.

“We have become stronger friends and we have a deeper trust in each other. We have become even more steadfast in our commitment to bilateral co-operation.”

Trust was lost and that’s the reason why China had to release a statement correcting the figures of the aid they had given to Zimbabwe.

While at it, I will, however, agree with some pundits who allude that while economics remains important in the China-Africa relationship, it’s just one part of a much broader political and military and technological agenda.

Lastly, there is absolutely no doubt that the Chinese are a bit annoyed by Mnangagwa’s inconsistencies in his foreign policy.

In my opinion, I think that the Chinese are disappointed by Mnangagwa’s dalliance with the Russians, and at some point, the British, and that is why some pundits were now alluding to the fact that the Chinese were now vouching for Chiwenga to take over.

In 2017, Chiwenga led a coup just after his return from China, toppling his long-time boss Mugabe.
Last year, he spent much of his time in the giant Asian country receiving treatment and upon his return, it was only Mr. Zhao, the Chinese deputy envoy, to receive him at Robert Gabriel Mugabe International Airport in Harare.

Could it be that the Chinese are preparing him to take over? Hence this then explains why Mnangagwa cut his leave also to meet Minister Wang. So much has been happening behind closed doors and perhaps one can also view this visit as a “make up” between friends who had had a fight.