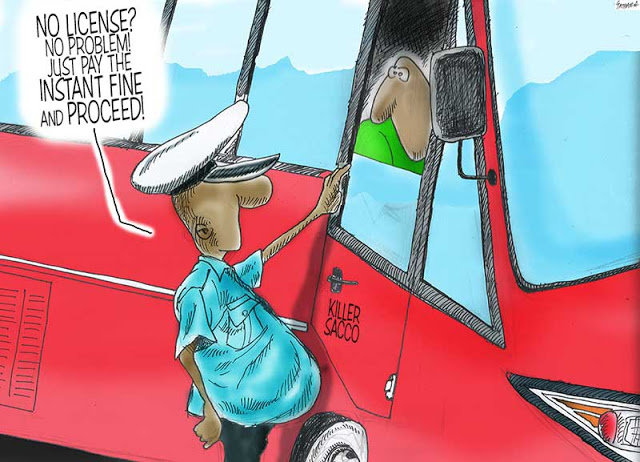 Last week in Kenya, the Cabinet Secretary for Transport, James Macharia, unveiled the latest government weapon in the war to, in the hackneyed words beloved by our media, “bring sanity to our roads” – instant fines. He gazetted a new list of list of “minor traffic violations” and the corresponding penalties to be paid on the spot without subjecting the motorist to the horror that are Kenyan courts.

For many motorists, any chance to avoid spending interminable hours at the traffic courts for a 30-second ritual where one gets to either admit guilt and be fined an outrageous amount, or deny charge and still get to pay a similar amount as bail, is welcome. In fact, if one was to deliberately design a system to incentivize corruption, it would be hard to beat the combination of our lumbering court system coupled with the humongous penalties prescribed by the traffic act.

But it would be a mistake to take it for granted that the government’s attempt to bypass it is designed to or will actually either ameliorate the dangers on our roads or eliminate the opportunities for graft. History teaches us otherwise. This is in fact not the first time government is using a public uproar over the road carnage as a pretext to institute a new system of fines.

Four years ago, following yet another series of nasty accidents, Parliament passed amendments to the Traffic Act that saw a tenfold increase in fines (the very fines the latest regulations are meant to bypass). The bill was signed into law by then President Mwai Kibaki in November and within four months, police were hailing it as a “success”.

Nearly a quarter of a million arrests had been effected and the government had collected half a billion shillings in fines. The number of deaths on the road, however, had barely budged. Kenyans continued dying at a rate of 300 per month even as the state inflated its coffers -such was the definition of success. Perhaps it was the fact that there were expensive election campaigns to be funded rather than the deaths on the roads that was at the forefront of our politicians’ minds when they passed the 2012 amendments. And as another election looms, we cannot discount the possibility that instant fines are just another money grab.

In a statement laying out the case for instant fines, the Director-General of the National Transport and Safety Authority, Francis Meja, noted that one of the challenges the system would inevitably face was in collection of the fines promising the NTSA would push for electronic and mobile payment platforms.

His concerns are borne out by the proceedings of the police vetting exercise conducted by the National Police Service Commissions. The comical attempts by traffic police officers to explain away their astounding wealth and numerous MPESA transactions have been the source of much public merriment and outrage. However, it is unclear how the instant fines will do much more than cap the bribes which will inevitably be demanded – with the unintended consequence of making it cheaper for rougue operators to stay in business.  In 2012, the matatu industry opposed the draconian fines saying they would only result in higher bribes. It is not difficult to see why they are now supporting the new system.

The fate that befell the cashless transit payment system is illustrative. Launched with much fanfare and backed by the best companies in Kenya, it came a cropper, as ably described by Ken Griffith in a 2014 piece, at the junction of crews who must pay matatu owners a fixed amount per day before they get paid and cops under pressure from superiors to hit their MPESA targets. Thus the crews, who are incentivized to do as many laps as possible, need to have ready cash to bribe cops and so would sabotage the cashless system. A similar dynamic was at work when cops insist on manning city roundabouts already governed by traffic lights.

Because instant fines do little to address the structural and systemic roots of the bad behavior on the roads, we can safely predict that they will do little to ease the carnage but will make money for the government. After all, there’s an election coming, remember?