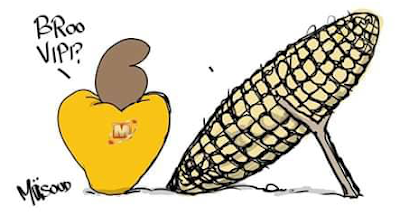 Tanzania has just witnessed a tale of the sacking of two Charles’. One, the Minister who was responsible for agriculture and, another, for industries. What has been dubbed ‘koroshow’ is behind this, not least because the cashew board has also been dissolved alongside other related reshuffles. Korosho is a Swahili word for cashew.

For politicians from the opposition camp, this is that moment when they remind both the electorate and the government that ‘we told you so.’ Zitto Kabwe, the leader of ACT Wazalendo, continues to be a ‘thorn in the flesh’ of the ruling party and its government as he boldly presents facts after facts to shows what it takes to resolve the cashew crisis.

As for the President, apart from firing and hiring, he has also asked the military to get ready to ship thousands of tons of unprocessed cashew if traders won’t buy them for the stipulated price by Monday. The ‘koroshow‘ has turned into a ‘koroshodown.’

My task here is not to gauge their prospective solutions as I don’t really know what they will actually achieve. In that regard, the best I can do is to wait and see. For me, the interest is to revisit potential solutions from scholars who have researched the matter in the past with the hope that we will be more attentive to the likes of them.

Let us start with Dr. Blandina Kilama whose PhD dissertation was on ‘The diverging South: comparing the cashew sectors of Tanzania and Vietnam.’ In an article aptly entitled ‘Crisis Responses in the Cashew Industry: A Comparative Study of Tanzania and Vietnam’, the economist looks at the impact of the global financial crisis on the crop. She shows how, compared to Vietnam, Tanzania only managed to protect the cashew farmers and not the processors.

One may argue that her article is outdated as it was published in 2009. However, the effects of the economic crisis she was referring to continue to linger. Moreover, it seems we are repeating some of the same mistakes. At that time, this is what she sharply observed:

“In Tanzania kernels production has fallen from 2006/07 to 2008/10, same with earnings falling in 2007/08 season…. As cashew continued to loose its price in the world market, processors found it difficult to buy cashew, while auctioning together with exporters. For example, the Premier Cashew Industries (PCI) halted processing cashew in 2009; similar option was thought by BUKO in Masasi.”

Dr. Kilama wrote that nearly a decade ago but it sounds as if she is writing it now. In the case of Vietnam, in contrast to Tanzania, she notes, everyone made profit then. Why? Mainly because of an “incentive of 4% reduction in interest rates on loans taken for productive purposes that was introduced to curb for the credit tightening occurring due to decline in international trade.”

Now let us go back a decade earlier. Dr. Joyce Nyoni and the late  Prof. Seithy Chachage published a research report on the ‘Economic Restructuring and the Cashewnut Industry in Tanzania.’ Among other things, they observed that the “buying of the crop was delayed and exporters could not export….” It is interesting to note that they referred to this as  a “crisis of cashewnut marketing in the buying season 2000/2001.” They also quoted one farmer saying:

“The government announced that we should not sell cashewnuts below the set price of Tsh.540/=. So we listened to them and when buyers came offering between Tsh300/= – 350/= we did not sell since we were already told that “walanguzi” will come to swindle us. Now they have left and we still have nuts in the house not knowing what we will do. It would have been much better if we had sold, even at a low price than having no money, while cashew is the main source of our income. The government has betrayed us and decided to let us suffer.”

Yes, that is not a farmer who is being quoted today – it is one who was quoted nearly two decades ago. Such cases from the past indicate that what we have is not simply a cashew crisis but a cyclic cashew crisis. And how do you resolve something that is cyclic?

By going back to the root cause and uprooting it once and for all!