Home » Elections » Lessons For Kenya From The Trumpocalypse

Lessons For Kenya From The Trumpocalypse 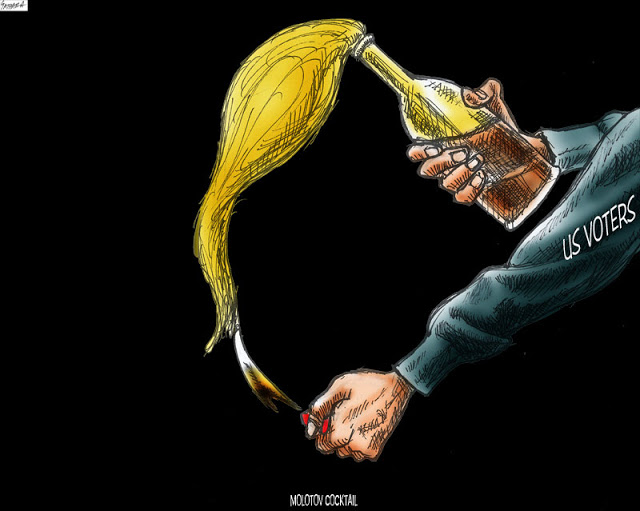 To describe Donald Trump’s victory over Hillary Clinton in last Tuesday’s US presidential election as a shocking upset is probably the understatement of the year. It is a seismic political upheaval which will rock, not just the American political system, but the entire edifice of Western liberal democracy, to its core.

Coming just months after the Brexit referendum in which citizens of the United Kingdom voted against all expectations to leave the European Union, which has been the lynchpin of that continent’s peace and prosperity for nearly three-quarters of a century, Trump’s win is, as the Financial Times declared, “another grievous blow to the liberal international order” and “a thunderous repudiation of the status quo”.

Little captures just how thunderous that rejection was than the fact that a national exit poll suggested that as many as 61 per cent of voters viewed Trump as “not qualified” to be President. He is the only candidate to ever be elected who did not have a smidgen of either governmental or military experience.

Over the coming days, there will be much soul-searching and head-scratching over how this came to pass and what it means. But at this early stage one thing is abundantly clear from Brexit and Trumpocalypse: large numbers of people in the West feel they have somehow missed out despite living in the one racial, geographic and ideological polity that more than any other has benefited from the existing globalized system.

Demagogic campaigns on both sides of the Atlantic profited from perceptions that the system was not working for the people, that unaccountable governing elites had signed them up to global trade agreements and policies, particularly on immigration, without their consent.  “Take our country back” was a common rallying cry. Substantial portions of the unhappy population became prey to a narrative that demonized immigrants as terrorists and free loaders and recommended retreat from the global system as a solution to domestic woes.

Trump’s triumph highlights fundamental questions about the structure and accountability of the post-Cold War global order, questions that have for too long been swept under a neo-liberal carpet. As Los Angeles Times’ journalist Vincent Bevins noted, “both Brexit and Trumpism are the very, very wrong answers to legitimate questions that urban elites have refused to ask for 30 years.”

The focus has tended to be on economic growth which disproportionately benefited a few at the very top with little attention paid to widening inequality. In the past, elites have ignored the voices of those who lost out in globalization by, for example, hiding behind high walls and riot police to escape anti-WTO protests in the last decade.

This time, however, they had run out of places to hide.

There are valuable lessons here for Kenya’s elite. Like their counterparts around the world,  Kenya’s punditry has predictably reacted with horror at the calamity that has befallen the US. “America does the unthinkable” wailed the Daily Nation, which bemoaned the fact that the US electorate had rejected “a smart politician with 30 years of experience” in favor of “a foul-mouthed casino owner and showman with an alligator-sized ego and, reportedly, the sexual morals of an alley cat”.

However, the fact is Kenyan voters, faced with a system that for 50 years has functioned to enrich a small coterie of politicians at their expense, has been regularly electing local versions of Trump -from a president indicted for crimes against humanity to members of parliament and governors implicated in corruption and drug trafficking. Like their Western counterparts, Kenya’s ruling elite have steadfastly ignored the demands for reform and accountability, the stark and growing inequality and the rumblings of discontent from the masses who have little to show for a half century of independence.

In that time, the political system has largely functioned to legitimize the power of rulers rather than to give voice to citizen concerns. What journalist and constitutional lawyer, Glen Grenwald, wrote of the West following the Brexit vote is just as true here. “Instead of acknowledging and addressing the fundamental flaws within themselves, [elites] are devoting their energies to demonizing the victims of their corruption, all in order to delegitimize those grievances and thus relieve themselves of responsibility to meaningfully address them.” Few will have forgotten President Uhuru Kenyatta’s attempts to fault ordinary Kenyans for the failure of his administration to deal with insecurity and corruption.

As in the West, the increasingly desperate electorate has fallen prey to populist, nativist and xenophobic rhetoric which has tended to blame religious and ethnic minorities as well as refugees. And elections have proven to have little to do with the ability of candidates to actually solve problems but rather seem to produce a rogue’s gallery of the corrupt, the bigoted and the criminal.

Democracy works when governments are evaluated on their performance, and when citizens watch whether governments keep their promises, and oust those that don’t measure up. Such accountability improves the provision of public goods, boosting incomes and welfare and reinforcing the sense of national belonging.

On the other hand, when the citizenry feels disillusioned about its ability to meaningfully participate in decision-making and to hold public officials to account, then politicians are evaluated on much less noble attributes: their capacity for patronage or even to what extent their election constitutes flashing the finger to the oligarchy –their ability to be what film maker Michael Moore described as “your personal Molotov cocktail to throw right into the center of the bastards who did this to you!”

Trump’s election is therefore a wake up call. There is a crisis of accountability and inclusion in democracies around the world and it calls us to engage in the wok of re-imagining and reforming our governance systems so they better respond to the circumstances and problems of ordinary people rather than those of the elites who lord it over them.