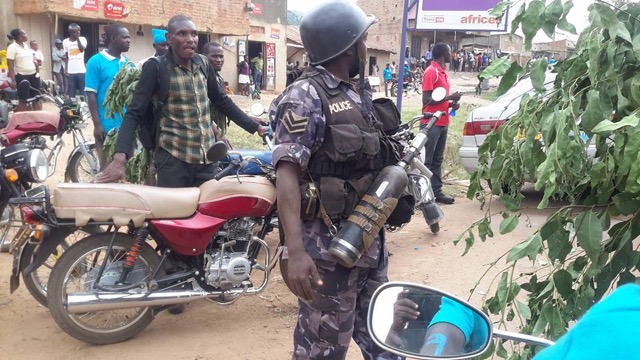 On January 26, 2016 Uganda marked 30 years of President Yoweri Museveni’s rule after he walked into the capital, Kampala with child soldiers in ragged clothes armed with AK 47 rifles and machine guns. 30 years later, judging by the look of things, Mr. Museveni is still bent on hanging onto power. He seems to delight in the steady misery he has instigated.

A day later on January 27 2016, Ugandans woke up to what sounded like war drums from the Inspector General of Police, General Kale Kayihura who according to The Observer newspaper stated; “We shall not hand over power to the opposition to destabilize the peace which we fought for.” According to the same article, the Police Chief further said: “We are going to change you from having sticks to rifles and get ready to defend this country in case of any attack” while passing out Crime Preventers at the Police Sports Gala in Kapchorwa district. It is not hard to discern that the Crime Preventers were being urged to get ready for war. Without a doubt Gen. Kayihura is not anxious to avoid controversy and seems oblivious to the fact that his statements-which are not only treasonous but disrespectful and an affront on the office he superintends-can be used against him in domestic courts of law or in the International Criminal Court.

It is worth noting that the Police Chief’s statements come against a backdrop of President Museveni’s own pronouncement coached in similar terms. According to a Daily Monitor story published on January 18 2015, Mr Museveni, while speaking in Kabale, said he was not ready to hand over power to the Opposition leaders because they are like wolves ready to tear Uganda apart.

To date this declaration has never been denied and each passing day incumbent Museveni’s words are being emphasized with reckless abandon by deliberate statements made by those who are close to the seat of power.

A few days ago Prime Minister Ruhakana Rugunda also threw a spanner in the works when he stated that if the opposition rigged the elections, NRM would not surrender power.

The writing is now on the wall, those who claim to have restored rule of law do not believe in its tenets. It is also clear that the NRM does not believe that the Electoral Commission can deliver an election free of rigging.

Recently the Secretary General of National Resistance Movement Organization Honorable Justine Kasule Lumumba made a dishonorable threat to the young people of Uganda. She said that those young, who are actually adults and have a right to contest electoral malpractice, will be shot if they dare turn up in the streets to show their displeasure about the election rigging. This creates fertile ground for an interesting debate on the upcoming election; Is Justine Lumumba planning to rig the elections? Has she already rigged the elections? Are these threats heads up on what their post rigging propaganda is? What is the intention of threatening Ugandans from contesting the outcomes of the upcoming elections?

Madam Lumumba, this is wise counsel to you, we have seen many who came before you and were used only to be dumped, your time is coming and what legacy do you want to leave behind? If I were you, I would just silently prepare to be part of the new Uganda without issuing threats.

It is not only disturbing but also quite regrettable that the men who pride themselves in going to the bush in 1980 for electoral malpractice have chosen to sound war drums again. Yet then and now, in a civilised society, war was and is never the first option to resolve a dispute, even if it is an election malpractice especially since Uganda has always had a functional Judiciary ready to administer justice to parties at crossroads.

I would like to believe that we had a justice system in 1980 and putting faith in the systems of the day could have entered the record as one of the routes they had taken. A civilised way of handling disputes would have saved the innocent lives of Ugandans who died in the jungles of Luwero but a small group of people thought otherwise. Sadly, an illegitimate government robbed Ugandans of their victory and now claims it has a right to further entrench itself in the lives of the citizenry. Perhaps I am being too civil for the order of the day; these men took to the bushes to hunt their animal for once and for all. No wonder someone always says he hunted down his animal.

In the midst of all abuse, Ugandans should be encouraged to be bold enough and remind these men and women who are sounding war drums that Uganda is bigger than their egos. This New Uganda for all is unstoppable and the time for threatening us to go silent has long gone. The time is ripe for us to stand for our rights to determine a future without violence, a future of freedom, peace and respect for all Ugandans irrespective of their differences.

We should purpose to shape our country peacefully and with determination a new Uganda that will unite its peoples will come.

As a child through my teenage I have seen the same man as President of Uganda. I am now a grown man, who has heard the same threats and promises for 30 years. This time all the threats must be treated with the contempt they deserve and the same promises should be ignored for they amount to nothing.