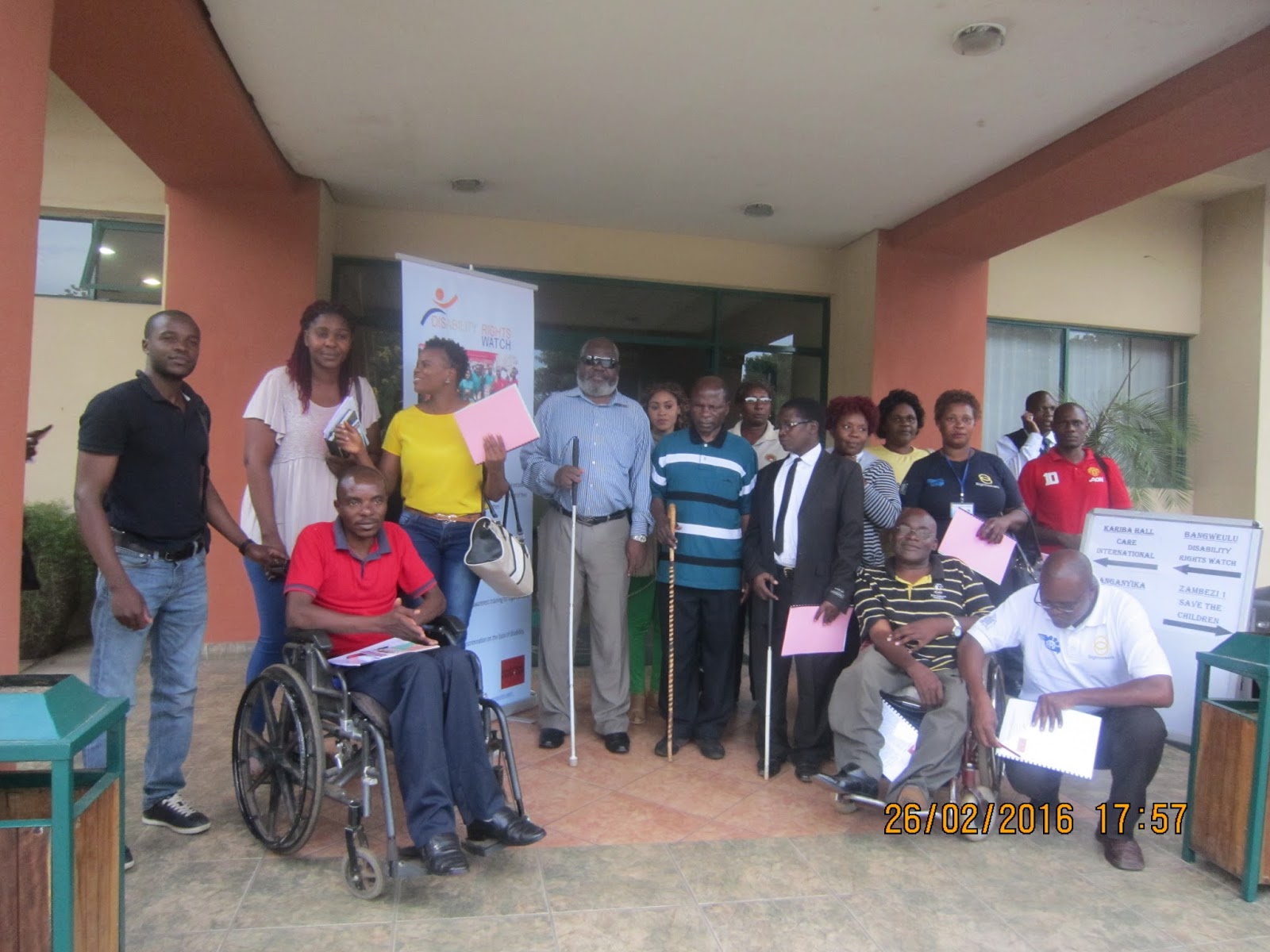 Zambia goes to the general elections in August this year under a new constitution that has significantly altered the electoral environment. The amended constitution stipulates that a winning presidential candidate must poll at least 50+1 percent of total votes cast. Also, positions of city mayor and council chairperson new now electable for a period of 5 years.

Zambia’s 2016 elections will not only be historical on account of the constitutional changes but also because it is the first time that the country will have developed and implemented measures to ensure that persons with disabilities effectively participate in the entire electoral process.

The electoral commission was compelled through litigation and advocacy to produce an action plan and budget to ensure that persons with disabilities are catered for in this year’s election. The Commission has proposed to spend K2, 800, 000 an equivalent of USD250, 000 to procure 5, 600 ramps to be used by persons with disabilities in this year’s election.

The commission has further proposed to spend K467, 000 an equivalent of USD42, 000 on production of information communication education materials targeted at persons with disabilities and engagement meetings with them. If Zambia succeeds to have such an accessible general election, the country may well be a model for other countries in Africa to follow.

Disability Rights Watch (DRW), a leading human rights watchdog on disability in Zambia has been pursuing the enforcement of the High Court Judgment in which Electoral Commission of Zambia (ECZ) was found to have unlawfully discriminated against persons with disabilities on whose behalf the Zambia Federation of Disability organisations sought court action. This discrimination was contrary to Article 23 of the constitution as read with Section 19 of the Persons with Disabilities Act.

Among other things, ECZ has been ordered to erect temporary ramps for use by persons with disabilities in all polling stations, ensure that all polling booths are  accessible to persons with disabilities. The commission has also been ordered to provide a tactile ballot guide for blind or partially sighted voters who wish to cast their vote in secret.

DRW has since got ECZ to produce an action plan on they will ensure that persons with disabilities will cast their vote like all Zambians without disabilities. DRW President, Wamundila Waliuya said as well as raising awareness of the planned action plan, his organisation will also put in place a robust programme to ensure at ECZ implement the action plan accordingly.

Mr Waliuya explained that in delivering judgment the judge had the option of directing the ECZ to postpone the elections on grounds of discrimination but opted instead to give the ECZ very specific orders to progressively make the entire electoral process accessible to Persons With Disabilities.

Reads part of the court judgement, the judge added:

“I am therefore reluctant to take an action which would put the nation on that course for the following reasons. Firstly and most importantly, the Petitioner and members of the organization are not the only participants and intending participants in the elections. Their individual and group rights and interests must be weighed against the rights and interests of the larger majority of the other participants and intending participants. From a purely common sense positions, the interest of this larger majority must prevail. There are also other interests which in my considered view are paramount as against those of the Petitioner and the organisation’s members. These are the interests of other stakeholders in the electoral process such as the tax payers who have partially funded the elections, the general electorate, the co-operating partners, various election observers and indeed political parties who are geared, at great costs to participate in the elections.

“Secondly, by the very fact that the remedies are couched in such a manner that they require me to grant them immediately, which would require the postponement of the elections, there are an indirect attempt by the Petitioner to invoke the provisions of Section 28 of the Electoral Act.” Reads the judgment in part.

Frank Musukwa of Zambia Deaf Women and Youth, based in Kitwe, Zambia, says he feels deaf issues remain under- or misrepresented. He observes, for instance, that there is neither activity nor budget for Sign Language Interpreters during the course of entire electoral process in the media. He argues:

“The right to vote is a unique and singularly important indicator of citizenship in a democracy, in Zambia and throughout the free world. For too long, people with disabilities have been in the shadows in exercising this basic civil right. The causes of voter disenfranchisement are myriad, but they include physical inaccessibility, a failure to provide registration and voting materials in accessible formats, a lack of private and independent voting for many citizens, and the denial of the right to vote on the basis of erroneous assumptions about a person’s capability because of his or her disability.”

In arriving at his judgment, the judge was aware to the fact that ECZ uses rented buildings. However, the judge considered his judgement realistic because the recommended disabilities friendly structures were only temporary and would not affect the building structures.

However, a meeting between disabled persons’ organisations and wider civil society to look at the action plan and chart a way forward ahead of the 2016 elections, stakeholders bemoaned the fact that the measures ECZ reported as done were not visible and doubted how the over ambitious budget the commission had drawn would be resourced.

There were also concerns about the effectiveness of the proposed processes in the action plan such as audits of polling stations as there was no evidence that persons with disabilities would be involved. It was also not clear what audit checklists would be followed in the process and the nature of collaboration put in place with the Ministry of Education, which owns most of the infrastructure to be used as polling stations.

The emphasis of the action plan was only on physical access to the polling booths by having ramps installed at the expense of other accessibility aspects noted in the polling stations audit done by ZAFOD prior to the 2011 litigation. These issues include poor lighting, lack of accessible sanitation facilities at polling stations. There was also need to address circulation areas and narrow doors and a number of other barriers where polling stations are set up.

Persons with disabilities resolved to play a more active role to monitor this year’s elections and to support the awareness raising efforts of wider civil society. DRW has since pledged to write to ECZ on the areas that needed clarity and to engage with FODEP in a process to review monitoring checklists and train monitors in disability inclusion.