Home » Freedom of Expression » Africa and the Internet as Religion

Africa and the Internet as Religion 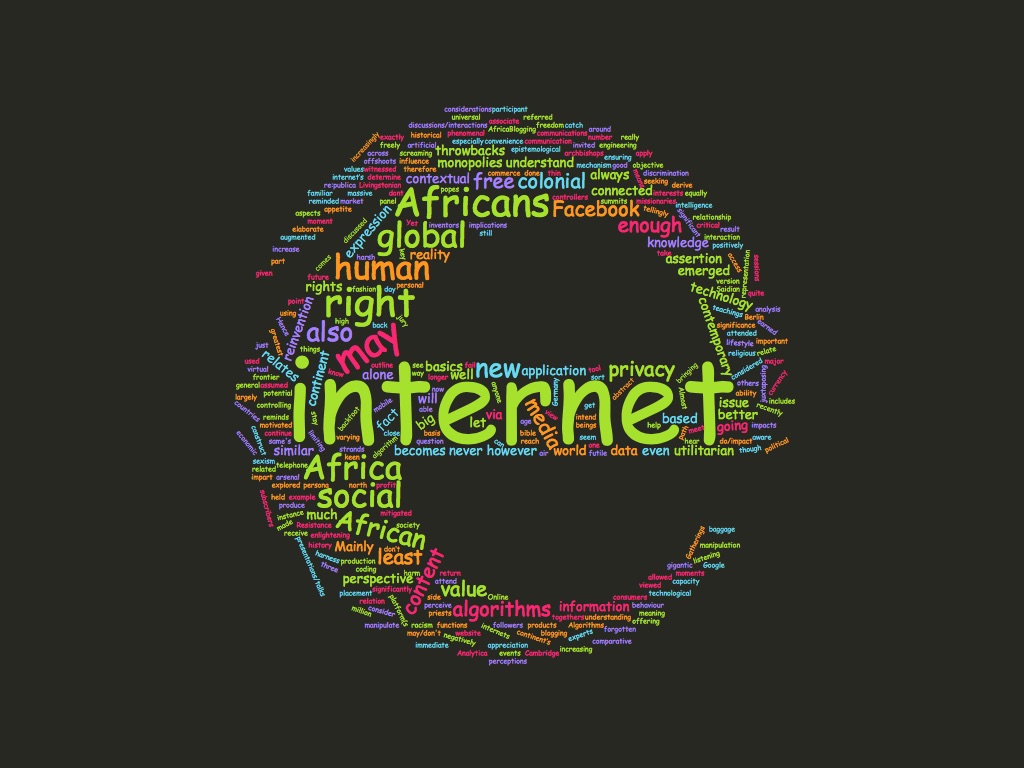 The internet’s relationship with Africa is always going to have moments of colonial throwbacks. Mainly because it is not just a technological construct that emerged from thin air.  It is a representation of technology that comes with the historical, social and contemporary baggage of racism, sexism, discrimination and even manipulation of human behaviour.

This is an issue I was reminded of while listening to presentations/talks from experts on the internet, algorithms and privacy a the recently held re:publica 2018  three day meet up in Berlin, Germany.

These discussions/interactions were very much aware of the fact that the internet has done more good than harm (social media, engineering, communications, augmented/ virtual reality, internet of things and artificial intelligence).  The point however was to elaborate on what is least discussed about it.

As an African who had been invited to be on a panel about blogging in Africa via the website AfricaBlogging, I was always going to be keen to see, hear and understand the continent’s placement and interaction with the internet and its offshoots.

What emerged (for me at least) was the very harsh reality that in Africa we don’t take a critical let alone objective appreciation of the internet.  At least in relation to how it impacts our rights (both positively and negatively, for instance, juxtaposing the right to free expression and the right to privacy). Or how we may/don’t consider immediate comparative analysis of how the internet may be used to manipulate our own perceptions of political, social and economic events using algorithms based on its major currency, big data.

So Cambridge Analytica may not be that much of an issue on this side of the world.  Yet it should be.

This also includes considerations on what exactly are the internet and social media  global monopolies such as Google and Facebook really up to on the increasingly connected continent. A participant in one of the sessions made an all too familiar assertion that ‘in Africa the internet is Facebook and Facebook is the internet.’ This assertion is based on the given fact that the application has around 177 million subscribers. And is also offering what is referred to as ‘free basics’ to an increasing number of countries.

What then becomes important is how Africans derive meaning from the internet and its utilitarian value.  In general, this value has largely related to its social media aspects as they relate to a phenomenal increase in the capacity of us Africans to receive and impart information.  And as it relates to the human rights of freedom of expression, access to information and in part the right to freely associate.  The jury is still out on how the application relates to the human right to privacy.

The catch is that even these universal values may not apply equally over and about the internet across the world. (I dont quite know if any African in Africa has earned the right to be forgotten by the internet.)

As a result a key question is what do the inventors let alone controllers of the internet intend for it to do/impact on the African continent?  And what would it be similar to?

In my very personal view, the reach of the internet and its mitigated content (algorithm anyone?) is as enlightening as it can be limiting.  It sort of reminds me of varying strands of missionaries bringing the bible, its teachings with both an outline of a new and ‘better’ lifestyle as well as more significantly, the Livingstonian perspective on the significance of ‘commerce’.

The internet connected (free basics) mobile telephone therefore becomes not only a tool of this profit motivated perspective but also a controlling mechanism of how we as Africans may be able to perceive of the internet.

As abstract as it may seem, we are in the age of the reinvention of the African persona.  Both as global human beings but more tellingly as those that are on the backfoot of this no longer so new technology and its epistemological (knowledge production) implications. Almost as though it is the contemporary version of the colonial ‘new frontier’.

As Africans, we have not explored enough of what this all means.  Nor will we be allowed to do so, especially via the same platform(s).  We are viewed as a market for its products as well as potential reinvention.  Mainly as the ‘Saidian’ ‘others’ and as consumers of the  internets’ massive arsenal of the convenience of communication never before witnessed in global human history.

But it is here to stay.  Algorithms and all.  We are better off, as Africans,  seeking to harness to our contextual interests and ensuring that we produce enough content for its gigantic ‘content appetite’. And also understanding how it functions, at the moment on ‘big data’.

We should be screaming back at the global north and the monopolies that have the greatest internet influence over it on the basis of our own ability to understand for example coding, algorithms and more significant its contextual utilitarian value.

Where we fail, we will continue to attend society and internet ‘get togethers’ in similar fashion to those that attended, as Africans, global religious summits, by being considered as those that were on the right path to new knowledge but never close enough to help determine the same’s future. Gatherings that had and now have high priests, popes, archbishops and followers of ‘the way’.  Hence we return to colonial throwbacks. Online. Resistance may not however be as futile as assumed.