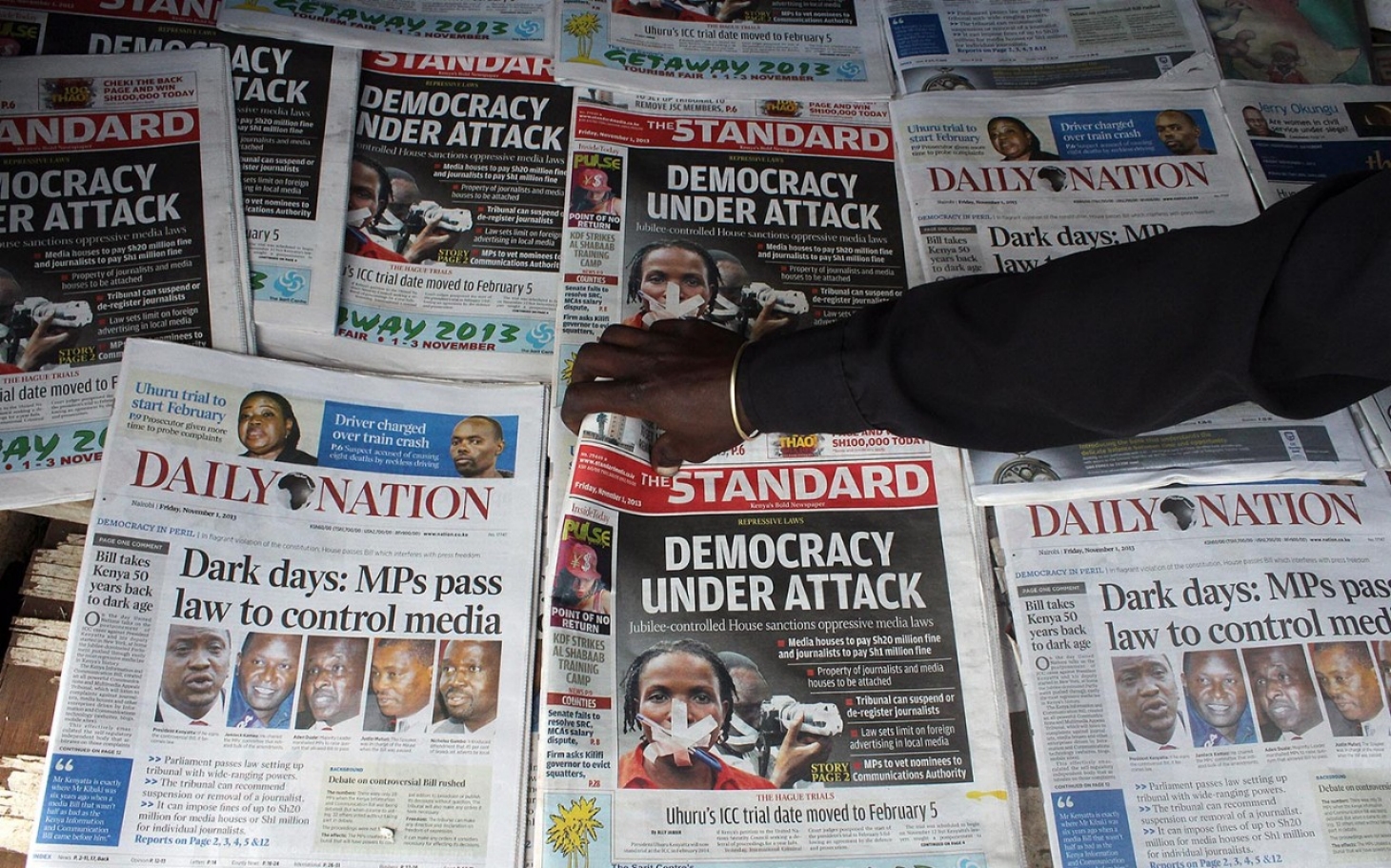 The last few weeks have been rather trying for Kenyan media. The government’s criminal overreaction to the mock swearing in of Raila Odinga did not end with the shut down of the three leading television stations for over a week. Even after they were allowed back on air, the Uhuru Kenyatta administration has continued to throw a tantrum, with the President chasing journalists out of one of his official engagements and the state singling out three from the Nation Media Group, Linus Kaikai, Larry Madowo and Ken Mijungu, for special attention, forcing them to seek protection from the courts.

Faced with this onslaught, the media has been quick to don the costume of public interest and proceeded to play the part of innocent victim. In a piece published on the CNN website, Madowo condemns the “shutting down [of] networks that have such a massive following [and] public trust … by a rogue government.”

“Our job as reporters is to record history, whether the government of the day approves of it or not,” he continues, declaring Kenya “one of Africa’s beacons for vibrant media [which] should not be dimmed out by an administration intent on censorship of independent voices, reducing the country to just another African dictatorship where critical journalism is outlawed and reporters constantly fear for their lives.”

Madowo deserves an Oscar for that performance. For while the government’s actions have been completely illegal and anti-democratic, outrageous in the extreme and deserving of full condemnation, Kenyan media has not behaved much better. The fact that he was forced to hawk his piece to CNN is telling. “This week, the @dailynation refused to print my column for the first time in nearly 4 years,” he had tweeted in explanation. In fact, a few days later, his column was to be cancelled entirely. And he wasn’t the only one targeted by the supposedly “vibrant media” which now seemed eager to do the government’s dirty work.

On the eve of Odinga’s “inauguration”, a leaked internal memo from Nation Media Group (NMG) Editor-in-Chief, Tom Mshindi, suggested that he and Kaikai, NTV’s General Manager, were “aligned” on not providing live coverage for the event. That was before Kaikai that evening, in his capacity as Chairman of Kenya Editors Guild, blew the lid off a secret meeting at State House between of “a section of media managers and select editors from the main media houses” and President Kenyatta, his deputy, William Ruto, the Attorney-General as well as Cabinet Secretaries for Interior and ICT. It was at this meeting that the media was ordered not to cover the Odinga event live.

Ultimately, NTV did cover the event precipitating its being illegally switched off by the Communications Authority along with KTN and Citizen all of whom continued to stream their coverage on the internet. Kaikai would pay the price for his defiance as a quick reorganization at NTV has reportedly seen him sidelined on decisions regarding what content is broadcast and now even seems set to leave the group along with Madowo. At the moment, the two along with Ken Mijungu, the very people police were seeking to arrest, have been effectively banned from going on air and Madowo’s political talk show, Sidebar, appears to have been cancelled.

All this is part of a trend. Kenyan media houses have become adept at sacrificing top journalists to appease the government. Just as. in the current crisis, media owners and top management have been happy to throw journalists under the bus, so in 2014, The Standard fired 3 of its journalists after top editors were similarly summoned to State House over a story the government disputed.

In 2015, NMG fired world-famous cartoonist, Godfrey GADO Mwampembwa, after his cartoons drew the wrath of the Kenyan and Tanzanian governments. In 2016, Denis Galava was fired from his post as the Daily Nation’s Managing Editor for Special Projects, after he penned a New Year’s Day editorial that was, according to The Star, “deemed critical of President Uhuru Kenyatta’s administration”.

Madowo’s notion that Kenya’s “vibrant” media conducts “critical journalism” is also quite misleading. We are talking here of establishments that are content to unquestioningly run press releases from State House as news, a habit which left the media badly exposed a few weeks ago after a claim by the Presidential Strategic Communications Unit that Kenyatta had been appointed a UNICEF global champion for youth empowerment turned out to be false. Further, many will not have forgotten that this same media houses were happy to pocket millions of public shillings for running illegal government advertisements during the campaign period. Or the role it played in allowing, and even encouraging, the delegitimization of civil society.

All this explains why many Kenyans have been ambivalent about supporting the media during the present onslaught. Poetic justice, some have called it, wondering why they should stand up for a media that does not stand up for them. There is a lesson for the media in all this. Protection does not come from courting the government, but rather from courting the people. In the end, as the Daily Nation’s own public editor wrote, it is the public that is “the best protector of press freedom”.