Home » Freedom of Expression » Press Freedoms Under Threat In Kenya

Press Freedoms Under Threat In Kenya 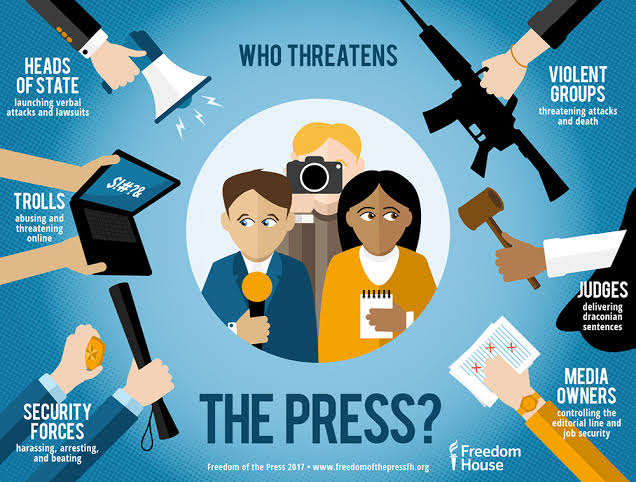 The arrest and detention of two Kenyan bloggers, Robert Alai and Patrick Safari over pictures of dead Kenyan security officers that shared on their Twitter timelines has once again shone the spotlight on government threats to media freedom in the East African country.

The pictures posted by the two showed some of the bodies of 12 police officers killed when their vehicle ran over a landmine suspected to have been planted by members of the Somalia-based Al Shabaab terror group. The bodies had been piled in the back of a government pick-up in a disrespectful manner.

The government, perhaps predictably, took a dim view of his actions, with the National Police Service and the National Cohesion and Integration Commission (NCIC) both urging the photos to be taken down. The police declared in a statement that the bloggers had chosen to “callously disregard common decency of showing respect to the departed and their families”. The NCIC chimed in claiming that the pictures would cause despondency among the country’s armed forces and could be construed as “propaganda for war which is not protected under the constitution”.

Both institutions seem apparently oblivious to the irony of claiming that it is not the actual treatment accorded to the officers’ bodies that showed disrespect but rather the reporting of it that was the problem. It is however not surprising. Such attempts at shaming Kenyans into silence are always employed whenever the government wishes to hush up criticism of its apparent lack of regard for officers and troops.

In January 2016, after nearly 200 Kenyan soldiers were killed in an Al Shabaab attack on their base near the Somali town of El Adde, the government also attempted to suppress any images that would highlight the scale of the failure, even going as far as to arrest and question a number of bloggers and journalists who posted pictures of the attack (though not necessarily of the dead) on his Twitter timeline. The government-sponsored hashtag #HonourOurHeroes was deployed to suggest that those demanding the truth about how many people died and for senior officers to held to account were somehow the ones dishonouring the troops, not the clumsy attempt at a cover up.

Earlier this year, on the third anniversary of that massacre, Al Shabaab militants attacked the DusitD2 hotel complex in Nairobi, killing at least 21 people. The New York Times published pictures which showed bodies of some of the dead, sparking a wave of online outrage from Kenyans on Twitter, calls for the deportation of their incoming bureau chief and threats of deregistration by the Media Council of Kenya – a state-funded body which regulates media in Kenya. At the time, while agreeing with the general consensus that the NYT was wrong to publish the pictures, some, including me, warned that allowing, and even encouraging, the government to get involved would establish dangerous precedents.

Today, those chickens are coming home to roost. The legitimization of the use of state power to intimidate and threaten the media has further emboldened those who are wont to shut down dissent. It is worth remembering that the Kenya government has had a long-standing ambition to censor the publication of pictures from terrorist attack. One attempt in 2014 sought to amend security laws to criminalize the publication of photographs of the bodies of terrorism victims without the consent of the police. It was fortunately declared unconstitutional for violating the guarantees of freedom of expression and of the media.

The government is well aware that the High Court in that judgment clearly disagreed with the idea that “images of dead or injured persons” even those “likely to cause fear and alarm to the general public or disturb public peace” amounted to propaganda for war. Though it is yet to state what laws the two bloggers are supposed to have broken, following a court appearance, they will however be jailed without charge or trial for at least two weeks while the police apparently investigate “claims they might have received the photos from an Al Shabaab sympathizer”. This despite the fact that a police officer has reportedly been arrested on suspicion of being the source of the images. The point of all this seems less to secure convictions than to harass and intimidate citizens and journalists into silence. It is little more than an abuse of both police powers of arrest and of the court process. In addition, the whole saga may also be a ruse to distract from uncomfortable questions regarding the whereabouts and quality of armored and mine-resistant vehicles that the government procured for the police three years ago to protect officers form exactly this sort of attack.

The media in Kenya should be very afraid. In essence, the government is looking to punish reporting that paints it in a bad light. If this sort of harassment is allowed to stand, it will not be long before regular journalists find themselves similarly treated when their stories rub the government the wrong way.