Home » Freedom of Expression » The complexities of Social Media in Zimbabwe

The complexities of Social Media in Zimbabwe 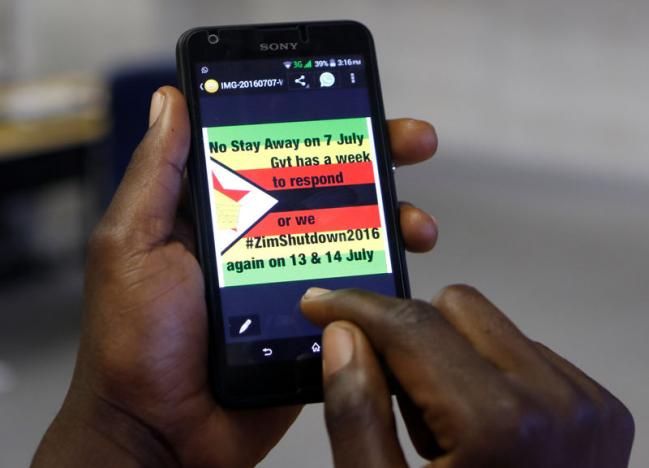 For the past two months, Zimbabwe has been dominating the regional and international news headlines following a “wave” of protests, mainly in the capital city Harare. Most significant are the events of July 6, which many commentators and some sections of the media are attributing the successes to mobilisation through #hashtags on social media.

However, this article will not delve much into the discussion of who did what during the shutdown/stay away protest events, but if the truth be told without fear or favour, we certainly cannot undermine or downplay the role played by social movements in that regard.

While images of running battles between protesters and the police in Zimbabwe were dominating the virtual networks and the international media, one would have thought that Zimbabwe was degenerating into another Syria or Afghanistan.

Consequently, it is in my humble opinion still that some elements behind the protests in Zimbabwe are rather self-serving individuals who have an appetite for the camera and attention. From whatever angle one may look at it, it is an undeniable reality that the numbers have failed to grow and are not convincing at all to mount pressure on President Robert Mugabe to relinquish power.

The protests have failed to capture the disenfranchised common man and woman in the streets of Glen View or Dzivaresekwa in building a critical grassroots movement that has a clear political programme of action to fight the Mugabe regime.

We cannot continue lying to ourselves that the protests have been a success and had the police not acted in the barbaric manner they did, it would be a different case altogether. Arrests and detentions should not be a yardstick for measuring success. And this is a call of action to the political parties and the civil society to mobilise the masses in all parts of the country rather than celebrating false victories.

The challenges our society will continue to face is the building of “cults” within our democratic movements. Movements should not be built around cults/individuals, but an ideological programme that responds to the needs and aspirations of the masses. The struggle needs selfless leaders, who are not obsessed with front page headlines and selfies, but the conviction.

The revolutionary task at hand is to build grassroots movements that are deeply rooted in the lowest classes of society with a collective plan of action going forward.

Over the years, there has been too much dependency or trust in individuals rather building strong institutions and movements to confront the challenges the citizens are facing.

We put so much belief in our “leaders” and that has resulted in some of them being permanent figures within our structures and movements because we desperately thought they would lead us to the promised land. Equally, instead of galvanising all the forces to pull from one end, there has been a competition for space, with some individuals wanting to be seen doing something, or rather, being the leading face of some imagined movement.

The events of the previous months have shown us such individuals, who, with the help of the media, became instant heroes by posting selfies on social media. Some have already retreated to safer zones, leaving behind their “followers” in a quandary, who had put so much trust in them. And that is dangerous for any movement that seeks to transform society!

However, it is now a revolutionary’s duty to calibrate and distill peoples’ grievances into its coherent revolutionary form. As Frantz Fanon puts it, the anti-colonial struggle starts as a trade union strike here, a student strike there, a pamphlet there etc. The revolutionary sharpens it until it becomes an outright eruption.

Tyranny takes time to erode, it does not happen overnight, as most self-serving leaders are becoming so impatient to think that they can wage such a struggle portraying false bravado to capture headlines. Real revolutionaries are patient, they prepare and mobilise for it. Clearly, what is missing is to distill the many fractions of the struggle into one cogent force.

The misconception and false claims by the self-serving individuals that were behind the July 6 shutdown are rather misplaced and unfortunate. The failure of the August 31st shutdown is a clear testimony that there is need for much work on the ground, rather than merely holding press conferences and venting anger on social media. The masses can never be substituted by anything, they are the vehicle towards transformation and hence, they need to be mobilised.

The fundamental political and socio-economic realities are far more complex than merely exchanging of WhatsApp messages, and updating timelines on Twitter and Facebook.

Revolutions usually occur when there are necessary social, political and economic conditions, that include mass poverty, unemployment and also in societies where there is illegitimate dominance of one political elite or cabal to the exclusion of others. And the prevailing environment is conducive.

The political repression by the political elite that desperately wants to cling to power, keeping power to themselves and close family members, should be the rallying point to mount mass resistance against the Zanu PF regime. Now, the confluence of these genuine concerns, challenges and problems in Zimbabwe provide ready material conditions for the political revolution to occur.

Therefore, like we witnessed with the success of the July 6 protests, the shutdown was as a result of the reality of repression, unpaid salaries of civil servants, corruption by police officers, banning of imported goods from South Africa, political dissent, growing unemployment and the kleptocracy of the illegitimate political elite that does not want to hand over power to anyone outside its circles.

While the socio-economic conditions are ripe, what is lacking is decisive strategic leadership that taps into or embeds itself into the organic structures of society, not on social media alone. Those pretending to be at the forefront keep themselves divorced and distant from the grassroots because of their obsession with their own views of their own world.

That organic grassroots organising and mobilisation of the people cannot be ignored. There is a clear perception/observation that the current political leadership has done nothing to improve the lives of the people and has totally failed the people. Claim no easy victories!!!!