Home » Freedom of Expression » The Disappearing Trial: “I never came to your court seeking for justice!”

The Disappearing Trial: “I never came to your court seeking for justice!” 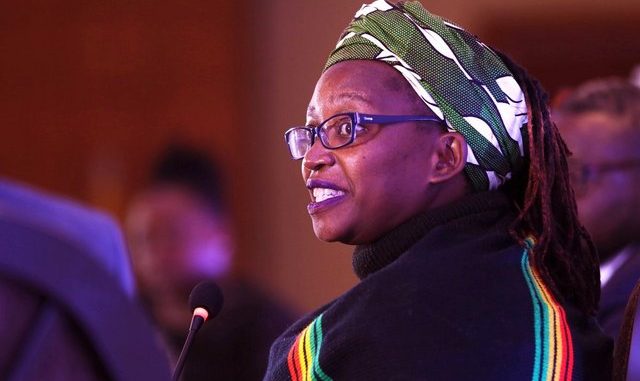 It is common parlance in countries that use the English legal system that “not only must Justice be done; it must also be seen to be done.” One must travel the path of strict adherence to the cardinal principles of the right to a fair trial to achieve this justice.

The case against Dr. Stella Nyanzi in criminal case number 1115 of 2018 at the Buganda Road Chief Magistrates Court leaves a trail of concerns as to whether she was accorded a fair trial. It has to be said that many accused in Uganda face similar, or worse fate, during their trials.

The first question that needs to be interrogated is whether the case against Dr. Nyanzi Stella should have proceeded to its conclusion in the very first place.

On November 2, 2018, Dr. Nyanzi was arrested over what the police described as offensive communication on her Facebook profile, which she posted on September 16, 2018. She was charged on two accounts of cyber harassment and offensive communication under sections 24 and 25 of the Computer Misuse Act, 2011. The charges were sanctioned and the prosecution ensued despite the fact that the two sections are being challenged in the Constitutional Court.

It is important to note that this trial different from the prior charge in which she was accused of calling the Ugandan President, Yoweri Museveni “pair of buttocks”.

Chapter Four Uganda, Uganda Law Society, and Unwanted Witness Uganda are challenging the impugned sections for being inconsistent with or in contravention of Article 28(2) and 29(1)(a) of the Constitution of the Republic of Uganda and should, therefore, be declared null and void. The first petition against the law was filed in February 2016.

It is therefore imprudent to proceed with a criminal trial when the constitutionality of the charges are in question.

In Davis Wesley Tusingirwe case, the Constitutional Court agreed with the Charles Onyango Obbo case and issued a stay of all matters in the Anti-Corruption Court:

It was argued that temporarily staying the criminal proceedings at the HCACD would greatly and adversely affect the operations of this country’s criminal justice system and that it would cause a stampede. We find that this is not necessarily so. First, the position at law is that where the constitutionality of any proceedings, Act, act or omission is being questioned and a prima-facie case is made out, then such proceedings, Act, act or omission should be stayed.

During the trial of Shaka Robert at Buganda Road Chief Magistrates Court in criminal case number 328 of 2015 where he was facing offensive communication charge, related submissions made in court by counsel and the court stayed the proceedings pending the determination of the petition.

In Geofrey Kazinda v the Attorney General, the Court of Appeal referred to Justice B.J Odoki in which he concurred with Justice Mulenga that the trial court only enjoys discretionary powers on whether to halt proceedings or not if a party to the proceedings before the court is the one who petitioned on his or her own to challenge the sections for which they are being charged. The import of this is to avoid frivolous petitions to the Constitutional Court with the intention to stall prosecutions.

In Stella’s case, the two offences were already being challenged by other individuals and reputable organizations. The question then is why do we continue to see a rise in prosecutions based on laws that are being challenged in the Constitutional Court?

Was Dr. Nyanzi afforded a fair trial, especially in regard to the right to a defense and equality of arms?

The Constitution of the Republic of Uganda provides for the framework of what amounts to a fair hearing in the determination of civil rights and obligations or any criminal charge against any person under Article 28.

Inter alia, the Article requires that an accused person shall be given adequate time and facilities for the preparation of his or her defence; and be afforded facilities to examine witnesses and to obtain the attendance of other witnesses before the court. The strict adherence to these minimum constitutional rights is in question.

Indeed, these concerns formed the basis of the application for revision to the High Court by the defence team. A total of nine grounds were raised in Application Number 24 of 2019 requiring the High Court to examine the lower court record to determine the correctness, legality or propriety of the trial of the findings and orders recorded since July 1, 2019.

Although the application failed, the revisional order by Hon. Justice Jane Frances Abodo raises questions as to whether the right to adequate time and facilities to prepare a defence and the right to a fair hearing in regard to the principle of equality of arms were observed, given the factors and circumstances of the case.

The right to defend oneself

Everyone charged with a criminal offence has the right to defend him or herself against the charges, in person or through a lawyer. For the right of defence to be meaningful, the accused must be given adequate time and facilities to prepare the defence.

In this case, Dr. Nyanzi was given only two weeks to prepare and argue her defence. Although the matter was adjourned seven times after the case-to-answer ruling on June 21, the period during which she had to prepare, summon, and present her defence was such a short time. The defence expressed interest to summon 20 witnesses.

In assessing what amounts to adequate time to prepare a defence, several factors such as the nature of the proceedings, the factual circumstances of the specific case, the complexity of the case, and the accused’s access to evidence and to his or her lawyer and expert must be taken into account.

A sober assessment of these factors makes it rather obvious that two weeks is such little time for an accused to prepare and present defence. Any concerns about the admissibility and or performance of any of the defence witnesses should not be a ground for the court to dismiss the defence’s case and justify restricting the defence period to such a short window – especially in a situation where the accused is on remand.

Access to information that is, or may be, necessary for preparing the defence is yet another important guarantee that appears to have been eroded in this case. It is on record that Stella’s lawyers requested a typed record of proceedings to enable her to prepare her defence. It is also on record that the trial magistrate outrightly rejected, citing that it would encourage laziness of counsel. She further said that the record of proceedings is voluminous and that the defence lawyers had always been present in court taking notes.

In the application for revision, the High Court ruled that the failure to give the defence the typed record was mitigated by other factors and that it did not in any way cause a miscarriage of justice on the case of the accused person. If indeed the record is voluminous, is that not an even more important reason as to why the accused should have been afforded the typed record of proceedings and adequate time to prepare? Neglecting to grant the access compromises the right of the accused to information necessary to prepare defence and threatens the object of natural justice in the adjudication of cases.

The last essential element of the right to a fair hearing that was violated in Stella’s case is the principle of equality of arms between the parties.

In any criminal case, it is important that both parties are treated in a manner that ensures that they have procedurally an equal position during the course of the trial. This is fundamental for their ability to make their case fairly.

In this case, it is noted that the prosecution had over three months to present three prosecution witnesses and make its case. It is therefore strange that after being put on defence, Dr. Nyanzi has been given only two weeks, in earnest, to prepare and present her defence. How is that fair?

The principle of equality of arms is crucial in criminal cases where the prosecution has all the machinery of the state against a citizen. This principle was violated by the sharp disparity in time granted to both parties to make their cases which affected the right to call and examine witnesses, access to information, and a spectrum of other rights that are essential for the exercise of the right to adequate time and facilities to prepare a defence.

*The American Bar Association’s Center for Human Rights is monitoring Stella’s trial as part of the Clooney Foundation for Justice’s TrialWatch initiative. Look out for the full report.