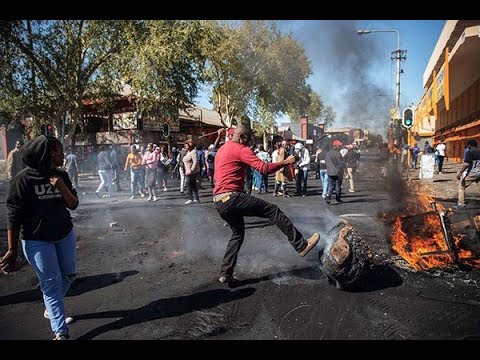 This recent week, if I owned Facebook, Google or WhatsApp and sitting far, far away from South Africa, Southern Africa and Africa itself I would be crunching the data of those that use my applications in those parts of the world.

Not literary mathematically crunching at it but waiting for the algorithms to give me key indicators as to how did images and videos of violence by black people against other black people in the comparatively economically rich Gauteng province of South Africa go so viral on my platforms.  I would know that some of the videos were made in real time by crosschecking again my platform for either Facebook live footage of the same or in the last resort mainstream global satellite media’s coverage with knowledge that they would also post it on my platforms for maximum impact and profit.

The key question however is would I have possibly known about it beforehand? Or at least done my very complicated mathematics or algorithms on the data to have predicted the potential violence based on what was being posted on the platforms I own?  Possibly, maybe or even probably.

And this is where my initial anecdotal narrative ends.

All based on the happen chance that most of what I will write henceforth, in this blog, is well informed from my reading of a seminal book by Shoshana Zuboff titled ‘The Age of surveillance Capitalism, The Fight for a Human Future at the New Frontier of Power.’  (See review here)

I am persuaded that we, in Southern Africa to be particular, are in the throes of the modification as opposed to the ‘conviniencing’ of our everyday behavior. Mainly via social media and as informed by the data the latter’s owners gather on us.  Not that it didn’t begin with soap, the mirror, through to paper, fixed telephony, the internet, mobile telephony, social media or as is now big data.

And this is not a bad thing in itself, even if our technological progress appears to have occurred by colonial default.

In fact, in our contemporary ‘technological’ state of affairs, it is probably enjoyable for a great many of us who now rely on our smart mobile phones for information which most times literally has to be audio-visual to catch our increasingly limited attention spans.

The anticipation is not in what we want to factually know but what we prefer to see, hear or say.  So when a video pops up in our WhatsApp group(s) and is shared many, many times as being a truthful event it is not for us to question its veracity. That’s an issue that does not really matter.  It’s for us to observe its gruesomeness, click our tongues in disapproval and oddity of oddities forward it to another WhatsApp group or re-share it.

In most cases, the most violent of images are allowable on various social media platforms that we choose to use or that we can afford.

And the outbreak of the violence in South Africa was testament to this.  Whether the images were true or false they definitively did one thing.  They raised emotions.  Not only in South Africa itself but also in the home countries of those most affected by it.  Within at least 48 hours of images urging South Africans to ensure that they shut down the ‘foreigners’ things quickly moved from the virtual to the real. The week beginning 1 September 2019 was the start of random but organized acts of violence against ‘othered’ African nationalities in the Gauteng province of South Africa.  Allegedly by South Africans.

A couple of days later social media was awash with counter narrative images and videos (real or invented) of revenge in the cities of Lusaka (Zambia), Lagos (Nigeria) and threats of the same elsewhere.

The neo-liberal World Economic Forum on Africa (WEFA) scheduled for Cape Town, South Africa went ahead amidst the reported withdrawal of a couple of African presidents who had been scheduled to attend. And that was a big thing. It indicated that for all the pretense at cozying up with global capital that WEFA represented the owners of  social media platforms  already knew, by way of data, the grumblings of the societal underbelly of South Africa.  At least in that country’s Gauteng province. By way of online behavioral data.

The escalation and immediacy of the violence that ensued was primarily motivated by the same. Whether the South African government knew beforehand will probably be the subject of history books. The likely fact of the matter is that it is most probable the owners of social media and even text messaging platforms probably had a rough idea, based on the algorithms they own and also have probably newly developed, that the likely course of real time action, i.e violence.

What remains interesting is the almost given predictability of human behaviour even in the aftermath of the xenophobic violence.     Even some of us who have never set foot in South Africa, let alone have any particular legal or financial capability of going there were besides ourselves in anger.  The demonstrations that were held and the attempts at the looting of South African related (not necessarily owned) companies in Zambia or Nigeria was an act of angst and a vainglorious attempt at economic envy catharsis.  All motivated by what we saw on our mobile phones and the perennially present social media applications.

What in effect got hidden between the Tweets, Facebook and WhatsApp posts was the tragic reality of the matter for Africans.  This being even if we invoke the liberation struggle to claim an evidently dying post-cold war  Pan Africanism as to why all Africans have a claim to the country that is South Africa, we know that that lure of the post-colonial metropolis is not going to go away. Particularly for many a young African.

Those that own social media platforms know this. They are studying our data and offering predictions of our potential behavior, at a price, to our governments and those that own real capital or would want to control futures markets.

I will end with another anecdote. If I owned my right to use a social media platform, I would retain my right to make a determination as to what it chose to show me but more significantly what I choose to believe to be the truth of what it shows me.  Not as part of a proverbial herd.  But as part of a critically conscious citizenry that knows who is trying to lie to us in order to profit from it.  Somewhere in Africa.