Home » General » Anglophone Crisis: the Cameroonian government forced to engage in a dialogue

Anglophone Crisis: the Cameroonian government forced to engage in a dialogue 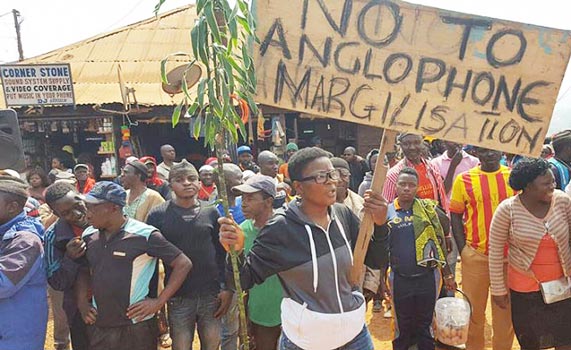 Deaf to the calls for negotiations coming from various sides of the issue for almost three years now, the Cameroonian government has finally been forced to open its doors to negotiations, specifically regarding the organization of the government.

Since May 9th, the Cameroonian Prime Minister, Joseph Dian Ngute, has been in the city of Bamenda to deliver a “message of peace from the President of the Republic” to the people. A step that seems to announce a new phase in the resolution of a crisis the has shaken Cameroon’s two anglophone regions since the end of 2016.

When the government turned a deaf ear

The Cameroon Anglophone Civil Society Consortium (CACSC), organization that brings together teachers and lawyers who are the first to move for strikes, calling for the return of a federal state, and the entity officially designated to negotiate with the government, is forbidden by the Ministre de l’Administration Territoriale – MINAT (Minister of Territorial Administration) and its leaders are arrested and imprisoned. The consequences of this attempt at decapitating the Consortium are disastrous: the group’s new leadership, located in the East, is made up of people who are more radical and who push the population towards civil disobedience.

Firmly sticking to its positions, the government, decides to militarize the zone. Abuses against population multiply, and the conflict’s sees its first victims. From ghost towns, we move into armed conflict, which devastates the two Anglophone regions and brings the government to its knees.

A conflict that leaves thousands of Cameroonians by the wayside

The conflict intensifies and victims start piling up in the two camps. As is the case with the secessionists, the army begins to lose men. Worse yet, civilians are caught between a rock and a hard spot, and forced, for some, to hide in the bush to survive. Recent data demonstrates the scale of the disaster: 1,850 dead, according to recent numbers published by International Crisis Group; more than 170 villages destroyed, according to the data collected by the Centre for Human Rights and Democracy in Africa (CHRDA); 35,000 Cameroonian refugees in Nigeria and close to 530,000 internally displaced.

But it doesn’t stop there. The ghost towns completely sink economic activity in the two regions, especially since shopkeepers who protest the deaths see their shops burnt to the ground. In January 2017, the internet is cut for 90 days, further reducing economic activities and leaving many businesses in pain. The Cameroon Development Corporation (CDC), the country’s second largest employer after the government, is in agony. In June 2018, a report on the impact of the Northwestern and Southwestern crises is published by the Groupement Inter-patronal du Cameroun (GICAM) estimating 2.14 billion CFA of material losses, with a shortfall of revenues approaching 270 billion CFA.

The document also states that the loss in tax revenue earnings is as high as 5.9 billion CFA and “8,000 jobs that depend on the informal sector” are being threatened, in addition to the 6,434 already lost. And this data only concerns the agro-industry.

The government is not swayed by this information and acknowledges neither the propositions to help the economy bounce back, nor the attempts at mediation made by some known personalities, like the Cardinal Christian Tumi, who proposes to hold an All Anglophones Conference to unite the forces of the region in order to explore the possibilities of ending the crisis. The conference is already scheduled but then, not having obtained the necessary authorization from the government, is postponed indefinitely in anticipation of the right conditions.

Outside pressure backs the government into a corner

Though the conflict is intensifying, the government categorically refuses to question its positions. Despite the economic abyss that the conflict has engendered, added to the war being led by Boko Haram in the Northern part of the country, the government stays its course, as the former Minister of Communication, Issa Tchiroma Balari, said at a press conference “Cameroon has a checkbook and a signature. Cameroon is still bankable; we can still borrow hundreds of billions.”

We can thus go into debt to the tune of hundreds of billions to fuel a war, but not to improve the lives of people who have been pushed to take up arms due to their despair.

In the meantime, the government creates the Commission Nationale pour la Promotion du Bilinguisme et du Multiculturalisme (National Commission for the Promotion of Bilingualism and Multiculturalism), whose purpose, even until today, remains unknown and the Comité National de Désarmement, de Démobilisation et de Réintégration (National Committee of Disarmament, Demobilization and of Reintegration), which has been a failure, in light of the fact that the preliminary conditions for disarmament have not been respected.

The country thus continues its slow descent into Hell, until Cameroon’s international partners get involved. First, the United States, who pulls back military aid that it has extended to Cameroon, because of the country’s infringement on human rights in the Anglophone regions. Then, the European Union adopts a resolution that puts Paul Biya’s government in an uncomfortable position.

Brought about through teeth-pulling, what chances does this dialogue actually have?

The fall of Prime Minister Joseph Dian Ngute in the Anglophone regions following international pressure should have already been carried out by the government as early as 2016. Today, the situation seems hopeless because too much blood has been spilled, and the positions of each side have become more radicalized. Plus, small armed groups and independentists have scattered into the farthest-reaching villages of the two Anglophone regions.

What is the takeaway from this dialogue? Difficult to say. The Minister met with the population as soon as he arrived and held meetings with the members of his party, the Rassemblement Démocratique du Peuple Camerounais – RDPC (Cameroon People’s Democratic Movement) – the party in power. He also met with the members of the Social Democratic Front (SDF), the traditional chiefs and the heads of labor parties. The goal of the meeting was clearly to gather propositions from these people about how to end the crisis. And this is what is the most disturbing: we have the feeling that the government will make the same error as in 2017 when, after several talks with the members of the Consortium, it decided to arrest the leaders and imprison them, to later turn around and ask with whom they would negotiate.

Though the dialogue seems to be open, the leaders of the opposition, such as Mancho Bibixi who launched the “coffin revolution”, Penn Terence and over 1,000 others, were already condemned, and are still being held in Yaoundé. Similarly for Sisiku Ayuk Tabe, interim president of the Federal Republic of Ambazonia (Ambazonia is the name given to the state of Southern Cameroonians, constituting the two Anglophone regions of Cameroon), as well as his collaborators are still being held in detention in the jails in Yaoundé.

With whom will the discussions take place if some of the protagonists are absent? Is the government sincere in its approach or does it just want to make itself look good in front of its international partners?