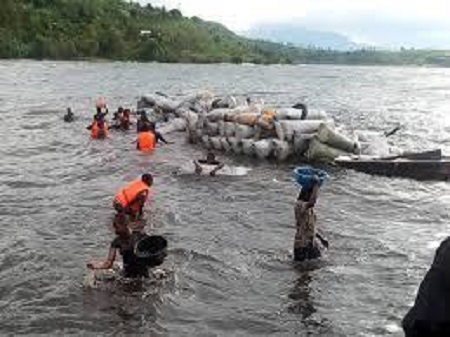 Every month now in the Democratic Republic of Congo (DRC)  we have an accident involving a water vessel on our rivers. Each time there are dozens, even hundreds of deaths mainly traders and Congolese travelers.

Recently, in the Kalehe locality in South Kivu Province, a boat capsized on Kivu lake, killing some 40 people and leaving many others missing. A few weeks later, another maritime disaster occurred in the same area. Again, there were about 2 deaths and 50 missing.

For 27th May, it is the great Bandundu that has just been struck. A whaling boat overturned and sank on Lake Mai Ndombe. The first provisional assessment is that there are more than 30 victims: men, women and children. Searching is ongoing to find hundreds more, still missing. According to several sources, the accident boat had onboard over 300 people, not counting luggage and goods. This suggests that the ship could have been overloaded – the owner of the ship has since been arrested.

All these shipwrecks in the DRC share two or three causes: overload, non-compliance with safety standards, poor condition of the boat. A wooden canoe with a capacity of 9 or 10 people can accommodate even 50. The Congo is a country of more than 80 million people who move a lot. The State needs to have good means of transport. Good roads, good planes and good boats.

Unfortunately, Congolese are forced to resort to these flying or sailing coffins. There is no difference between a cargo ship and a passenger boat. Without precaution, they embark pell-mell women, children, goats, oil cans, fuels … And the consequences are all these fatal accidents. The boat owners themselves do not worry about overloading the boats so long as they make money, which is their primary interest.

Following the Kalehe boat wreck which killed more than 40 people, the Congolese President, Felix Tshisekedi, visited the site to assess the damage and console the victims’ families. He offered a thousand lifejackets and ordered that passengers must not board any boat without protective equipment. This is not new, such instructions are never heeded or respected. Investigations have revealed that it is a Naval Force Colonel that is behind the sinking of Kalehe because he should not have allowed the boat to cast off, without inspection.

Thus, this accident should force the authorities to take drastic measures against all those involved. The government must also regulate and monitor transportation in this marine sector to prevent such loss of life.