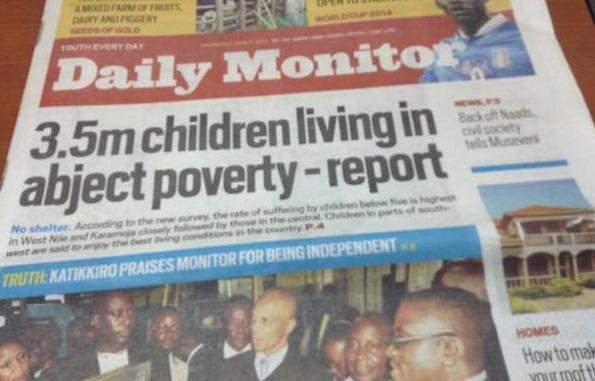 Donning a tired T-shirt that has since lost its original colour and shape – Kutosi, a 5-year-old boy in Bunamwani village, Mbale district wears a sweet, innocent face. He is one of the 3.7 million children in Uganda below five years of age living in poverty. This is half of the under-five population in the country. Of these, 1.6 million live in extreme poverty.

Kutosi lives with his parents and 6 siblings in a small, semi-permanent, one bedroom-house. At night, he humbles his little body on a papyrus mat to catch some sleep. When it gets cold, he uses his mother’s old ‘gomesi’ to cover himself. In a conversation, his siblings narrated to me how they often survive on one insufficient meal a day.

At 5, Kutosi is yet to start school. If the nearby government school had pre-school, chances are that he would be at school by now.

Under such circumstances, there is no doubt he faces treacherous obstacles to succeed in life.

Kutosi’s life is that of millions of children in Uganda – a young country, 57% of Uganda’s population is below 18 years of age.

They are born into broken social structures that condemn them to the consequences of child poverty. We fail them.

Child poverty is more than just money. It is about deprivation of two or more of the following basic child rights: Access to nutrition, health, water, education, shelter, sanitation, information and child protection.

Although child poverty in Uganda has reduced significantly in the past 10 years, the numbers remain alarming and simply unacceptable. Skewed income distribution has resulted in the rich getting richer and the poor poorer.

And as usual, it’s the marginalised in rural areas and urban slums who take the hardest hit and yet they ask not for much. At the vicious hands of disparities and lack of equitable opportunities, children in rural areas are 3 times more likely to live in extreme poverty than their peers in urban areas.

A recent joint situation analysis of child poverty and deprivation in Uganda by UNICEF Uganda and the government revealed nutrition is the most common form of deprivation accounting for 33% of stunting in children. 36% of children walk an hour’s return trip to fetch water. More than 11% of children are forced to engage in open defecation due to lack of latrines, and 15% of school-aged children have never attended school. Behind these percentages are real lives and hopes of a generation.

This stress is toxic to the ideal environment under which children are supposed to develop.

The good thing is, we know what we need to do to improve this absurd situation. The Integrated Early Childhood Development policy is quite elaborate on how these gaps can be addressed.

Eradicating poverty, in all its forms, is Goal number 1 of the Sustainable Development Goals (SDGs). There can be no more pervasive poverty than poverty that ravages the most vulnerable – children.

In a powerful and insightful brainstorming session at a recent event convened by UNICEF Uganda and the UN Foundation in Kampala, we reflected on the connection between Early Childhood Development and the Sustainable Development Goals. It is remarkable how interlinked they are.

Under the National Planning Framework of Uganda’s National Development Plan (NDP) II, human capital development is one of the key pillars towards achieving Vision 2040. A key component of this is investing in powerful early childhood development programs.

For these wheels – iECD, SDGs and NDP II – to roll back the circle of poverty, they will need necessary budgetary allocations, strong political support, existence of child-friendly laws and zero corruption.

It cannot be business as usual.

We must target our interventions to vulnerable and disadvantaged children. This is the only way we can address disparities among children to provide them with an equal chance in life. We owe it to them and to the future of this country.