Month of Breast Protests in Uganda 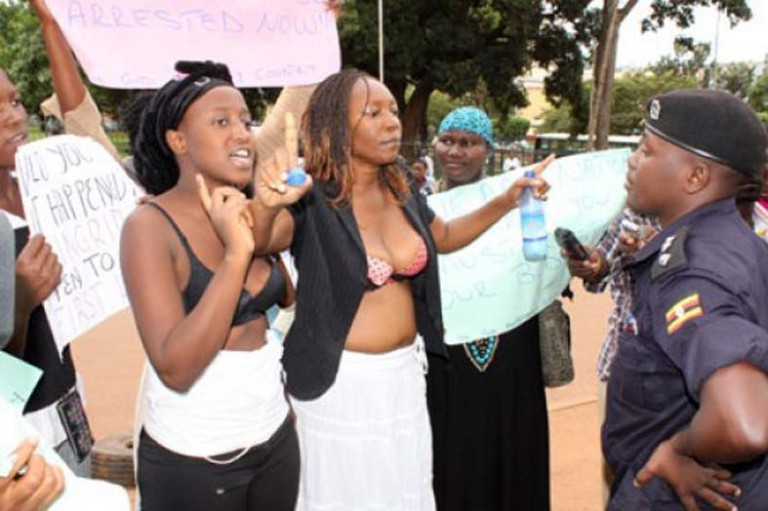 I was sitting in the living room with my mother and grandmother as we watched the news broadcast of the women in Amuru on NTV Uganda. On 16th April, 2015, women stripped before the Minister of Land and Minister of Internal Affairs over a land dispute. “It’s a curse,” my mother said. My grandmother agreed.

April 18, 2012. Women in Amuru district undress before officials of Madhvani Group of Companies.
The firm was there to ask the community to vacate the land, which would then be used to grow sugarcane for commercial purposes.

April 23, 2012. Activists strip to their bras at the Central Police Station in Kampala in protest of the manner of arrest of Ingrid Turinawe. Footage from her arrest showed a policeman squeezing her breast, and Turinawe crying out in pain. Nudity was both in protest and in solidarity.

April, 1989. 1500 women in Gulu marched half-naked to protest violence in the region.

Igara West MP recently said that women had no power. Things happen to women and they can do nothing about it because within the state, they are disadvantaged. While they might till the land, they don’t own it. If they report sexual harassment, there is little chance of justice.

Within the limitations of their roles as mothers and wives, women have- through the generations- protested. In the Aba Women’s Riot of 1929 in colonial Nigeria, wives of Warrant chiefs followed them everywhere, invading their space and influencing their decisions through the pressured presence. In 2003 Liberia, the women sat by the road and sang every day.

They were everywhere, singing for the end of the civil war, and when the peace resolution was taking too long, they sat and blocked all the exits refusing to let anyone out until an agreement had been signed.[1] In April 2009, Kenyan women staged a sex strike- that the wife of then Prime Minister Raila Odinga joined- to force the coalition government to work together [2].

According to Karina Eileraas (2014), nude protests have “a special capacity to reconfigure the body politic by framing vulnerability as a basis for exchange and staging intimate zones of disruption and disidentification.” [3] The April 2012 protest against police brutality was mostly by younger women

The aim was to stand in solidarity (they told police they’d brought them breasts for police officers to squeeze) and was also an act of defiance meant to use the very site of brutality- the breast- as a political base of protest. The exchange was a different kind of heat from that when the women in Amuru stripped. They, like those in 1989 Gulu, were mirroring the hopeless of the situation they found themselves in with the vulnerability of their naked bodies.

Except that while she is vulnerable as a naked woman, she also represents a discomforting image to the beholder. Daily Monitor reported that when the women in Amuru stripped, Gen Aronda Nyakairima “stood motionlessly looking in different directions to avoid eye contact with the nudity.”[4] While one might not be moved by the nude protest, there is discomfort because like my mother exclaimed, it is a curse.

The private/public dichotomy of breasts in Uganda is complex as mothers freely pop them out to breastfeed. In that moment however, they only function as mammary glands that nourish because ultimately, we consider the woman as primarily a reproductive being.

When the subjects are old women however whose duties to reproduction are long fulfilled, we don’t expect to see their breasts. In fact, when you reach a certain age, you are not supposed to see your mother naked.

Her breasts are not your source of nourishment. She may bare them at times from heat, but this is always for the temperatures and never for display. This is completely different from a breast protest. It is a political act where she intentionally inserts her body- that which should move through the world clothed and preferably quietly- into the conversation. This is why shame comes easy to the gaze as the woman has deliberately cast her body as an object of representation of her suffering. Given the intent on the older woman’s part and the reason that would drive her to this point, it is no wonder that we call it a curse.

In isolation, the protests have been called everything from melodramatic to embarrassing while some have recognized the intentional disruption. Looked at together, the protests have the power to tell the story of a patriarchal nation that continually oppresses its women, subdues them when they talk back (through promises or arrest) and then still denies them justice and the right to simply exist on this land we call our country. Although justice has not been the immediate result of any of the protests, they are the sound of the woman raised in wails, from her naked body, against an oppressive state. And that of her sisters in arms protesting in solidarity and shared suffering alongside her.