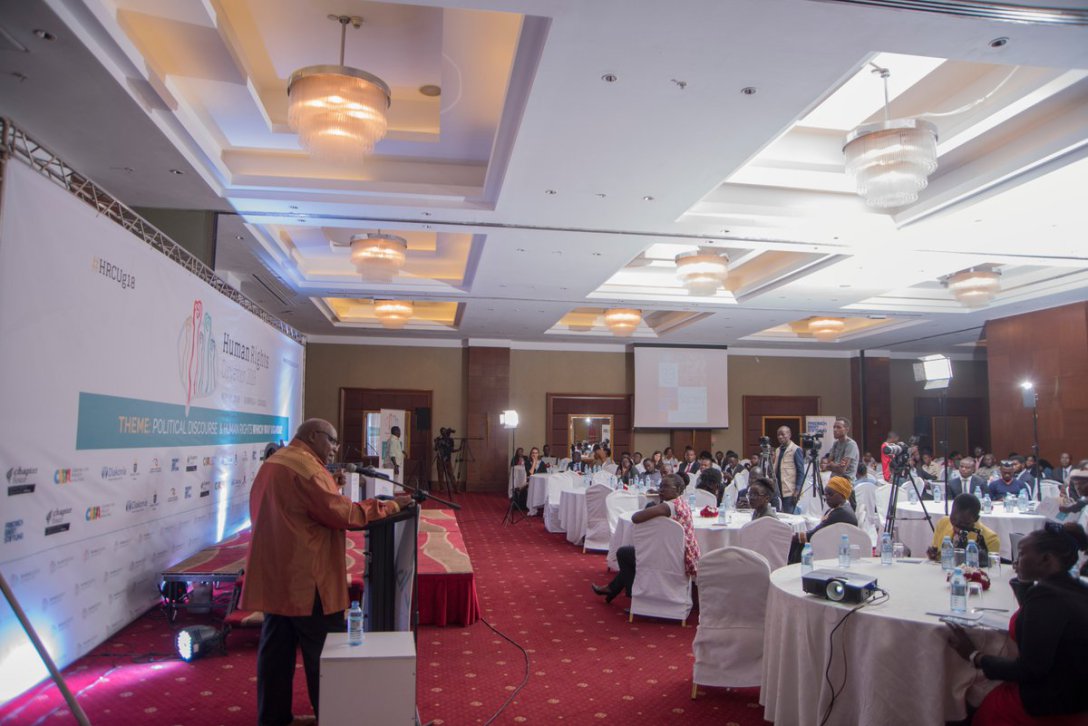 The wave of political repression is closing civic space and threatening fragile democracies across the world. In Uganda, the situation is not any better. As a result, many look up to the civil society to play a crucial role in scaling up civic activism to engage and push back for respect of rights and democratic ideals. But civil society itself is struggling. So, what’s the way forward?

On May 2 and 3, 2018, civil rights group Chapter Four Uganda, with the support of partners, convened the second annual Human Rights Convention at Kampala’s Sheraton Hotel. With a diverse community of over 400 guests, the event provided space for frank conversations on human rights and democracy situation in Uganda to forge a way forward. Internationally acclaimed rights defender and former UN Special Rapporteur on the Freedom of Peaceful Assembly and Association, Maina Kiai delivered an inspiring keynote address.

As anticipated, powerful ideas came through from the invigorating conversations.

What next? All the amazing ideas will mean zilch if the vehicle that is supposed to re-energise civic engagement and activism for social change is impotent. This raises concern on the current NGO model of organising because any failures are likely to undermine the ability of citizens in advancing rights and holding government to account.

“We’ve to ask ourselves if we as NGOs are hurting organising rather than helping,” Maina Kiai asked. This is nothing new.

Autocratic leaders have found it fashionable to spread doubt about the legitimacy of the very idea of civil society and use legislative processes to enact a mosaic of illegitimate laws that are used to control or shutdown groups. In Uganda, for example, sections of the Public Order Management Act, the Anti-Money Laundering Act, and the NGO Act 2016 are of particular concern.

In addition to the State orchestrated restrictions, NGOs are also contending with a number of serious issues that require our attention.

Over the years, NGOs have become so professionalized that they have arguably lost their soul for the log frame. “We’ve lost touch with the people,” Maina Kiai cautioned. While stating a case for organisations to hire mobilisers to link them up with the grassroots, he noted,

“Its not about anything much. Just seat and communicate with people. Its not about a workshop or giving anything. That, we’ve lost.”

NGOs have to forge close working partnerships with the bigger community out there, despite of reluctance from a section of some civil society groups. As an expert at a recent scoring for the 2017 Civil Society Organisation Sustainability Index (CSOSI) for Uganda to project trends in the sector, I observed first hand how other sectors such as trade unions, religious institutions, and associations are not actively represented during such important reviews.

In their work, civil society organisations have to also be unapologetically political, but not partisan. Quite frankly, there are no ifs or buts.

Actions of the sector’s allies are also hurting civic space. For instance, donors often set the agenda through fixed strategic plans and calls. NGOs need to engage donors for a frank discussion on priority society challenges for most appropriate interventions to reverse this trend.

Commenting on the Black Lives Matter movement, Maina Kiai spoke of how social movements are compelling major donors to change there funding models in response to needs of communities.

In a May 2018 paper, the International Center for Not-for-Profit Law (ICNL) called on donors to allow civil society to define priority areas of support and adapt aid modalities to current realities through flexible funding for start-up CSOs through oral or basic project pitches, long term core support, and non-financial support.

It is also important that most of these support services be accessible to all groups, whether formally registered or not. Freedom of association is a right, not a privilege granted at formal registration.

We need to continue having this conversation. Civil society has to counter legitimacy concerns and other impediments to the NGO template by challenging inequality in all its forms, and adopting models that demonstrate direct representation. They also need to build partnerships and find more allies, bolster sectoral cohesion, explore self-funded models, increased transparency and accountability, and build capacity and stronger networks at the grassroots.