Home » General » The Dream Within The ‘Dream Team’: Football As A Zimbabwean Metaphor

The Dream Within The ‘Dream Team’: Football As A Zimbabwean Metaphor 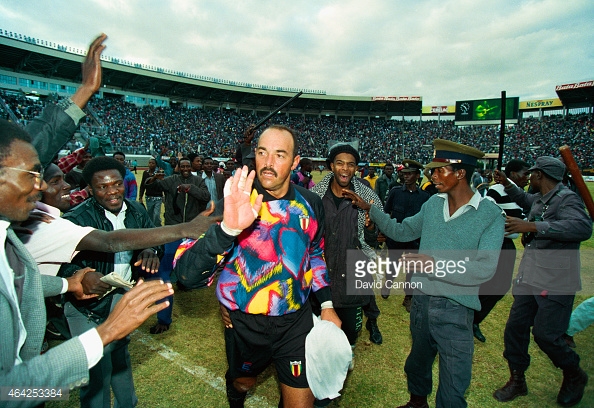 When Zimbabweans invoke memories of ‘the good old days’; of the country’s rise and former prosperity, a range of popular culture symbols and metaphors are often associated with this harkening back to a seemingly perfect past. Witty television advertisements are reconstructed, the allegoric music of that time is replayed and characters from literature and film are remembered. Also not far from many Zimbabweans’ memories is the ‘Dream Team’, Zimbabwe’s iconic national football team, so named in the early 1990s for the sporting feats it promised and excited in the nation’s collective imagination.

Featuring an eclectic mix of skills and experience, this was a superstar team bound for footballing greatness. Qualification for the African Cup of Nations and World Cup was eagerly anticipated by multitudes of fans. As Ian Hawkey observed in 2015 in an essay about the team’s anchors, striker Peter Ndlovu (who played his club football with Coventry City) and goalkeeper Bruce Grobbelaar (who played for Liverpool):

From the vantage point of today’s [English] Premier League, in which almost every team has at least one African in its line-up, it seems remarkable that in 1992, when the Premier League began, the two established African stars of the top-flight of English football were both Zimbabwean.

What is perhaps more intriguing is that these two heroes were Zimbabwean in a way that challenged the conventional construction of this identity, often idealised as ‘black’ and ‘Shona’. Ndlovu was from the second-largest tribe in Zimbabwe, the Ndebele. By the 1990s, a long history of antagonism and conflict between the Shona and the Ndebele had marred relationships, with the effects of the Gukurahundi – a 1980s state-authorised military operation that led to the massacre of thousands of Ndebele – still uppermost in many minds. Grobbelaar was a white player who had served for two years in the Rhodesian Army in the white minority’s protracted battle against black nationalist rule. At the time, his participation in the team – even as racial tensions continued to simmer in post-independence Zimbabwe – appeared to authenticate the famous statements made by Robert Mugabe at his 1980 swearing in as prime minister, when he stated:

In addition to Grobbelaar and Ndlovu, the team also featured a coloured player, Henry McKop, who played in defence, and midfielder Benjamin Nkonjera, who was of Malawian descent – two further identities that often suffered the status of ‘other’ in nationalist constructions. In many ways, the Dream Team – kitted out in the colours of the national flag and working towards a collective goal under the banner of a fairly nascent Zimbabwe – represented more than just the dream of football excellence. They represented the dream of a united nation.

In 1992, when the Premier League began, the two established African stars of the top-flight of English football were both Zimbabwean.

As a result, popular representations of the Dream Team often played on notions of fearlessness and dedication. In a song that became the rousing call to stand behind the team – sung both in Shona and Ndebele featuring dramatic twangs of a guitar fused with urgent screeches of a referee’s whistle – Tanga wekwa Sando likened the team’s opposition to hunted animals ready for roasting, and their fierce play to that of insatiable lions. In a popular television advertisement for a men’s deodorant, Grobbelaar assures the viewer in heavily accented Shona of the product’s dependability and, more subliminally, of the Dream Team, declaring “Haikurasise” (It won’t let you down).

Yet, despite these associations with invincibility and an improbable dream, the team never lived up to its name, neither qualifying for the African Cup of Nations nor the World Cup at a time when almost anything seemed possible for Zimbabwe.

The metaphor of the Dream Team could easily stand for the great hopes and expectations that many held for Zimbabwe in the heady days of its newly claimed freedom. But the dream was never the reality of the Zimbabwe of the 1980s and 1990s; rather it was an essentialist ideal that often erased the nation’s unresolved challenges.

… Football pitches offer arenas not only for the match, but also for the production of public spheres and imaginary spaces where social, cultural and political praxis and discourses are created, celebrated and negotiated.

In the same way that the dominance of the Dream Team proved to be imaginary, so too, by the mid-1990s, was the idea of an indomitable Zimbabwe. Backed by the World Bank, with its neoliberal imperatives towards liberalisation and privatisation, the Economic Structural Adjustment Programme (ESAP) Zimbabwe had adopted in 1990 was beginning to return woeful results, including the contraction of the economy and an explosion in inflation. These impacts were further exacerbated by a period of severe drought that crippled productivity. An estimated 200 000 skilled professionals are thought to have fled Zimbabwe between 1990 and 1998[2], a portent of the millions to follow thereafter.

Rifts in national identity still manifested strongly in domestic football, with the rivalry between Highlanders – commonly constructed as a ‘Ndebele team’ – and Dynamos – its ‘Shona counterpart’ – serving as symbols of unresolved tribal conflict. Matches between the two were often volatile and highly emotional. Such constructions have been encouraged, for example, by the chants and songs adopted by supporters of each team during matches. One chant (in Ndebele) of Highlanders’ fans states: “Hakula Shona lihlala eSoweto[3]. In turn, a Dynamos chant states: “MaNdevere munoapireiko doro/ Mandevere musaape doro havazogeze”[4]. At the same time, white football enthusiasts had all but abandoned their interest in local football, investing their support instead in sports like tennis, cricket and rugby.

The politics of a beautiful game

Today, the myth of Zimbabwean prosperity and unity walks a tenuous line, especially within the current state of affairs where a leadership crisis, a frustrated public and a financial meltdown threaten to take Zimbabwe back to the bleak days of 2008, a time of near-complete shutdown as a result of mass shortages of basic commodities and aggressive hyperinflation. A 2010 FAIR investigation into football management in eight African countries, including Zimbabwe, found that:

… while players have sacrificed their personal fortunes to develop not just soccer but their own communities, and have in some cases bailed out their national teams, the administrators tasked with developing the game focus on personal gain.

While Zimbabwe – with a mix of new players and those from the Dream Team era – would eventually go on to qualify for the African Cup of Nations in 2004 and 2006 (exiting both tournaments in the first round), the administration of the game has grown to become one of its biggest talking points.

In the early 2000s, Leo Mugabe, a nephew of the president, was fired from his position as Zimbabwe Football Association (ZIFA) CEO after failing to account for a FIFA youth development grant worth US$61 000. In what is commonly referred to as the ‘Asiagate’ match-fixing scandal, 80 footballers were suspended for their alleged involvement in throwing football matches against Asian teams. In one match against Malaysia, players for local football club Monomotapa are said to have misrepresented themselves as the national team. For her role in the scandal, Henrietta Rushwaya, ZIFA CEO at that time, would be arrested and later acquitted on charges of failing to disclose details of such matches to the Association. Among her other misdemeanours during her tenure would be taking a loan, unaccounted for, to the value of US$103 000.

More recently, ZIFA’s chairman, Cuthbert Dube, widely known for fraudulent conduct that saw him benefit by millions of US dollars from corruption within a number of companies, including one of Zimbabwe’s largest medical aid societies, resigned from his position. This avoided a likely ousting for his complicity in the body’s dysfunction. He has since been replaced by the equally controversial millionaire businessman, socialite and former ZANU-PF parliamentarian Phillip Chiyangwa.

Early in 2015, FIFA expelled Zimbabwe’s national football team from the 2018 World Cup qualifiers for ZIFA’s failure to pay Jose Claudinei Georgini, a former national coach, outstanding salaries amounting to US$60 000. A further suspension from the 2022 World Cup is looming over Zimbabwe over another debt of US$180 000 owed to former coach Tom Saintfiet. The debt is reportedly being financed, however, by Wicknell Chivayo, a controversial businessman known for his ostentatious social media posts, which include photographs of bricks of tens of thousands of US dollars at his breakfast table. Last year Chivayo pledged US$1 million in sponsorship to ZIFA. However, it was soon reported that he rescinded the pledge on reports that disbursements had already been mismanaged. He later reinstated the pledge.

The Dream Team remains a metaphor for many things in Zimbabwe: a symbol of the ‘good old days’; an emblem of hope and a longing for former dignity.

With the decline of Zimbabwean football increasingly mimicking the disrepair and selfishness of the nation’s politics, it is unfortunately the dream for prosperity that continues to suffer. Indeed, the Dream Team remains a metaphor for many things in Zimbabwe: a symbol of the ‘good old days’; an emblem of hope and a longing for former dignity. This in part explains the exponential growth of the #ThisFlag campaign, a movement that spoke to Zimbabweans – mostly online, both in Zimbabwe and Zimbabwe’s diasporas – to share their non-partisan interpretations of, and allegiance to, the Zimbabwean flag, as well as their desires for the nation’s future amid multiple and recurrent tribulations.

But just as our interrogation of our nation’s past and present requires more thorough and nuanced critique, so too do the symbols we now hold on to as markers of a previous glory that might never really have been.

There is an ongoing need to ask ourselves just how ‘good’ those days really were, and whether we may have willfully ignored the spectre of the present in our moment of hopeful euphoria. For even the Dream Team – with all the talent, support and potential it promised and excited – remained just that. A dream.