Home » General » When a picture is worth a thousand words: Xi Jinping meets ‘Africa’

When a picture is worth a thousand words: Xi Jinping meets ‘Africa’ 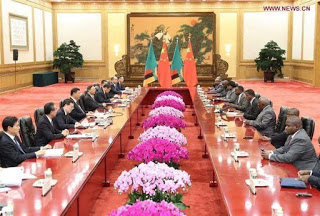 A picture is worth a thousand words, is the phraseology popularised in 1927, by advertising executive Fred R. Barnard. He coined the phrase, to refer to the notion that a complex idea can be conveyed with just a single still image or that an image of a subject conveys its meaning or essence more effectively than a textual description does. This can be said to describe an image taken in Beijing, China where the Zambian government delegation led by President Edgar Lungu met with China’s Xi Jinping’s team.

Unlike video or audio, a picture can convey different meanings and interpretations. In this instance, the image at hand, rather paints disturbing and worrisome connotations.  This is a picture that has conveyed a strong message, an unpleasant depiction of the Zambian head of state and his delegation and how Africans take a lackadaisical approach to important engagements. We are often not taken too seriously because of how we present ourselves. While some are quick to say, “Don’t judge a book by its cover,” at times it is the impression that matters, it is on the surface and not necessarily the detail that takes the day. Suffice to say that perception, is reality.

The trending image shows two delegations, a more serious and attentive Chinese team seemingly paying attention, with their pens and notebooks right in front of them presumably taking down notes on the important details of the deliberations, while on the other side the Zambian delegation, looking rather lost, confused, casually sitting with neither notebooks nor pens in front of them. It appears as if only the Chinese were taking the meeting serious thus the taking down of notes on the aspects of the discussions.

The image trended on social media, particularly on the microblogging site, Twitter attracting hordes of comments that were mainly mocking or making fun of the Zambian delegation.  Most of the comments indeed insinuating that the Zambians lacked ‘seriousness.’ No wonder why they are always getting bad deals.  In one such posts by Newsday journalist Nqaba Matshazi curiously tweeted: “How come the Zambian delegation don’t have anything in front of them, no notes, won’t take notes?

Matshazi’s views were shared by many of his followers on the microblog, who were apparently shocked that a whole government delegation can just sit and ‘get lost’ in all talk at such a meeting without any pen or paper in front of them. At times it is the body language, the impressions and actions one does in a boardroom that can give you an edge during negotiations. One social media user alluded that not taking notes can symbolise, to the team on the other side of the table does not prioritise documentation or systems and process. You just need to be attentive or at least pretend you are on top of the situation, not to appear lost in the Savanna Forests like the Zambian delegation.  Just by reading through the actions of the Zambian delegation, it is not surprising that the Chinese knew their counterparts were either not paying attention or were not prepared.

Reacting to Matshazi’s tweet was a Twitter handle @HonMbele; ‘’we can tell how much bribe money to pay just by a single eye contact. No need for notes, we look u in the eye… Then we give you our bank account. Deal done.’’ For @HonMbele he insinuated that for the Zambian delegation, the details were not important but just getting the money.

Another interesting tweet had the following reaction; ‘’this is common in all African delegations. They have no time for details, all they want to hear is that their request for the billions has been approved period. For this reason we end up with loan agreements that enslave us for generations! Such comments cannot be dismissed but rather they show a general perception shared by many Africans on how African leadership delegations behave when they are out there negotiating for deals.

While the comments have been free ‘entertainment’, it is however, a worrying trend about the way and manner in which African leaders take such meetings for granted. With deals of aid and loans worth billions of dollars, it is not surprising that most African governments are assenting their signatures without much scrutiny of these agreements. Whilst we do not have much detail about what was actually transpiring at that gathering, we are only left to speculate that it was just one of those casual briefing meetings with no serious stuff being discussed. Maybe or maybe not?

It could be that they were taking note (at least in their heads) of every detail that was being discussed. Over the years, there have been concerns about the deals African leaders are entering into, particularly with the Chinese. Citizens from across the African continent have been sceptical about Chinese deals and that most African leaders just append their signatures without paying much attention to the details.

For most African leaders, these trips are shopping safaris and nothing else. It is about the periderms they get and the impatience to go and shop. This is why they won’t write or take notes. They have no love for the nation. It is just about them getting new trinkets and toys which they can boast about once back home.

There is no proper planning for engagement, it is just about begging and most of them would have even gone without business leaders.

In fact, more images emerging from Beijing are showing that it’s an African trend. The events in Beijing speaks to different work cultures.

As the FOCAC meeting is currently underway, it is always the case that we seem not prepared with no solid policy on paper on how to engage China, at African Union level, SADC, ECOWAS not even at a country level. It won’t be surprising that for most of these countries they do not have any national development plan or vision to guide them.

It all seems that we are always throwing ourselves into the lion’s jaws with impunity.

In conclusion, Africa will do well with a polished league of young leaders that are ready to confront the world through a serious show of leadership. The Zambian delegation, though an epitome of the current crop of leaders, leaves a lot to be desired and an egg on the continent’s assertiveness in defining her future and beyond.  Africa deserves better!